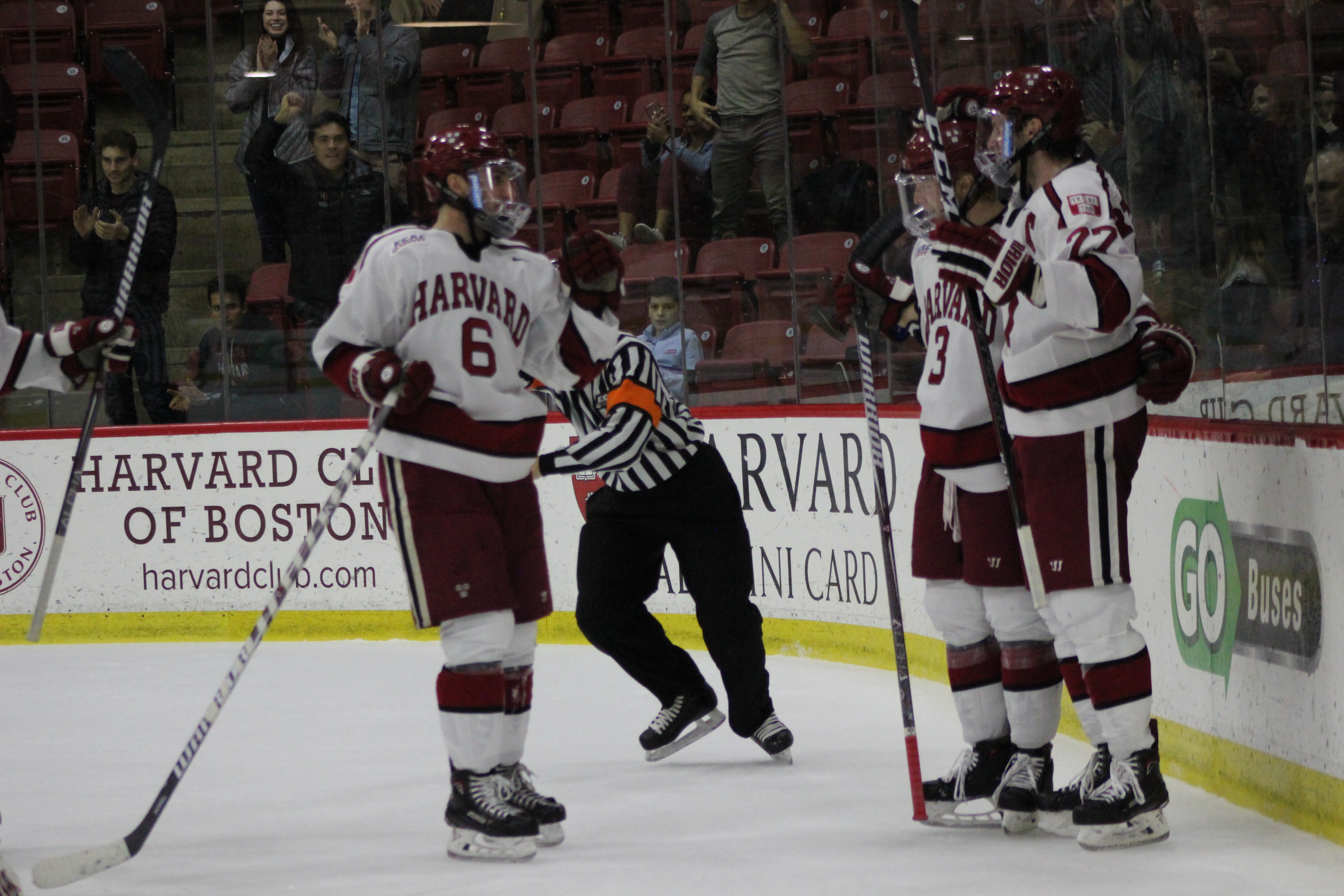 Allston, Ma. —  For the second straight year Dartmouth travel to the banks of the River Charles to take on Harvard in the ECAC Quarterfinal round. Just like last year, the Big Green come in as the number five seed to the Crimson’s four seed. Dartmouth and Harvard split their season series this year, with each team winning on home ice.

The question facing Dartmouth was could they keep up their run of good play away from home against a better squad than St. Lawrence? The question mark for a rare was Colan Cam Gornet carry the goaltending load in the postseason?

The opening period had each team answering those questions early. Dartmouth had a few quick chances on Gornet and the Crimson that the keeper kicked away with ease. A nice right leg save on Shane Seller was followed by two quick kick saves on Quin Foreman in front of the Crimson net. Harvard had a chance of their own when Adrian Clark stopped Colton Kerfoot. Dartmouth had a three on two chance off the counter rush, but a backchecking Adam Fox made the stop just inside the Harvard zone. He turned the puck over giving Foreman and Drew O’Connor a two on one chance but Gornet was there to make the stop.

The nation’s second-ranked power play unit got the game’s first opportunity at 18:11 when Dartmouth’s Kevan Kilistoff was whistled for Delay of Game. The Crimson managed one shot on Clark. Harvard was carrying the play but Dartmouth had the better scoring chances throughout. The Big Green outshot the Crimson 10-8 for the period while losing the face-off battle 7-12.

The second period had Harvard opening with pressure that Clark and Dartmouth were able to withstand. A steal by O’Connor along the left boards led to a scoring chance by Will Graber, but again Gornet was there. At 7:50 Dartmouth broke through and opened the scoring when Gornet was down after making a stop and Ryan Blankemeier poked home the loose puck. The call on the ice was No Goal but after a lengthy review, it was deemed a good goal. Cam Strong would get the assist.

The Dartmouth lead would be short-lived as Lewis Zerter-Gossage would get the equalizer at 9:08 when he picked up the puck in the right circle and threw it towards the net. The puck would carom off of Dartmouth defenseman Joey Matthews and into the Big Green net. Jack Rathbone and Fox would get the helpers on the goal. The Crimson were playing their game cycling the puck well in the Dartmouth zone. Harvard would outshoot Dartmouth 10-5 but lose the face-off battle 10-8.

The third period Dartmouth came out strong carrying the play. A Slashing call on John Marino at 2:01 would give the Big Green their first power play. They were unable to muster much offense. Dartmouth’s Harrison Markell was called for Interference at 4:25 but like the Green, the Crimson only had one shot. At 11:51 Hobey Baker hopeful Fox took charge when he snuffed out the Dartmouth play in the neutral zone, carried the puck in, flipped it to Colton Kerfoot on his left. Kerfoot drew the Dartmouth defender over and he slid the puck back to Fox who easily put it by Clark for the 2-1 Harvard lead.

At 17:30 Dartmouth had a chance when O’Connor threw the puck out front from behind the Harvard net. Gornet made the stop, but Foreman was there if he didn’t. After a Dartmouth timeout, the Big Green had another solid chance that Gornet turned away, the rebound was drifting towards a charging Connor Yau at the top of the right circle but a diving Michael Floodstrand poked the puck away and out of the zone. Kerfoot would seal the deal on this game at 18:46 with the Dartmouth net empty. He took the pass from Baker Shore and fired it in from the Harvard blueline. Harvard outshot Dartmouth 12-5 for the period and 30-20 for the game.

“I think we’re happy to get the win,” said Coach Ted Donato. “Kind of what we expected, it’s not that easy to jumpstart back to into playoff hockey after being off for a couple of weeks. And Dartmouth’s a good team.” The coach was very pleased with the play of his starting goalie. “I thought Gornet made some real important saves early on for us to get out of the first period 0-0.”

“I just wanted to be there for my team as they were getting into the swing of things,” Gornet said of his early performance. “And then midway through the second I maybe got five shots the rest of the game.”

“It was a good college hockey game. I thought our kids played hard,” Coach Bob Gaudet said.  “Harvard did a good job. I thought part way through the second period after we scored they started to take some control. We had some bids, we just didn’t have enough. The kids worked hard. We need to be a little bit better tomorrow.”