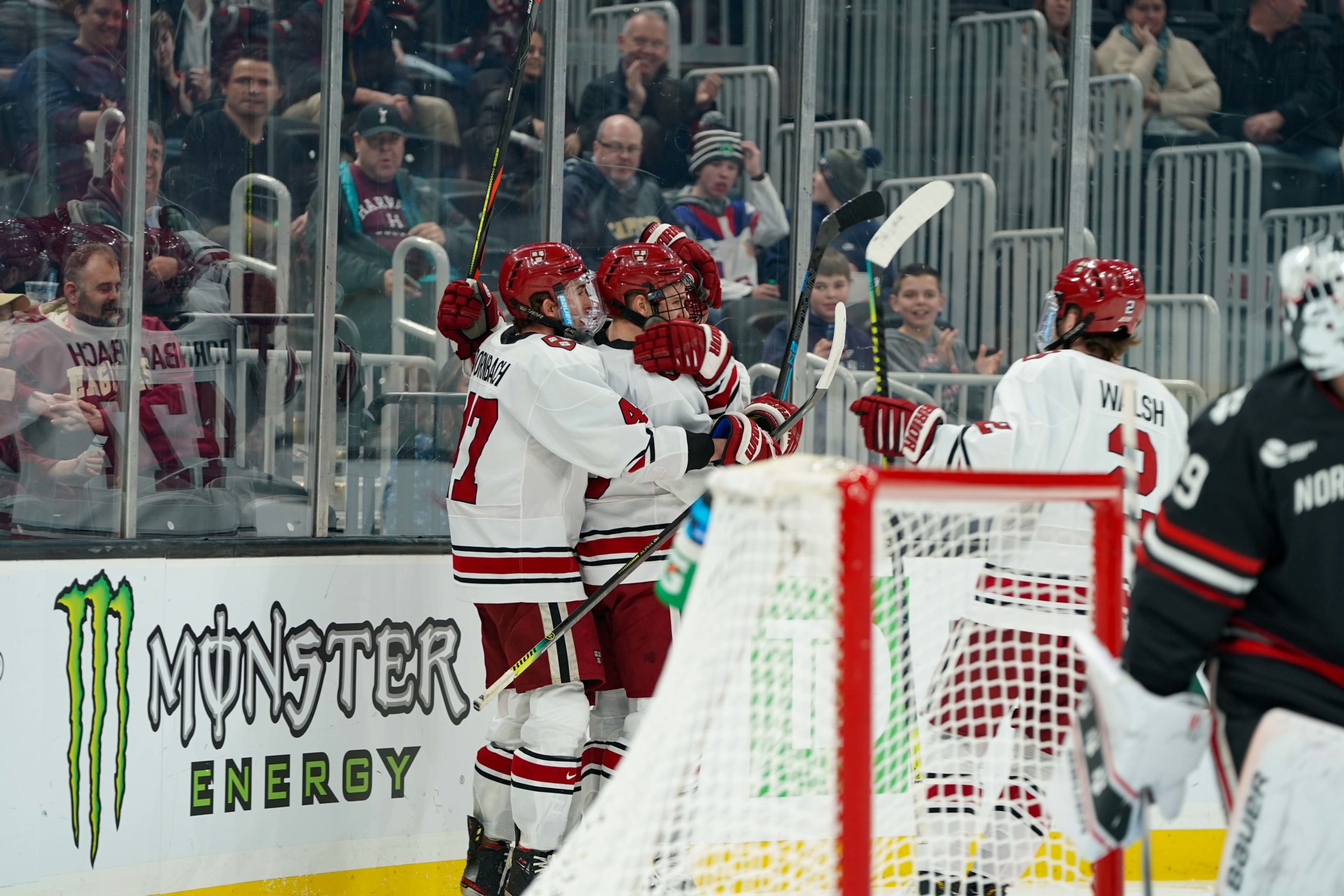 Harvard celebrates after their first goal

Allston, MA. – The Harvard Crimson kicked off the road portion of 2021-22 on Friday night by defeating Dartmouth 9-3 in Hanover, NH. They picked up right where they left off on Saturday in their home opener downing the Bentley Falcons 7-3. Two players, John Farinacci and Sean Farrell tallied two goals each while Henry Thrun and Nick Abruzzese had five and four assists respectively.

There’s no place like home, and for the Crimson after over 600 days away from playing in front of their fans at Bright-Landry Arena, they wasted little time in reacquainting themselves with their friendly confines. In just under a minute the Crimson had a 1-0 lead over Bentley on a John Farinacci goal. The junior from Chatham, NJ tipped a Henry Thrun shot from the top of the left circle on Falcons goalie Nicholas Grabko and banged home the rebound for his first goal of the season. Sophomore Sean Farrell also assisted on the Farinacci goal.

A Hooking call on Bentley’s Tanner Main gave the Crimson the game’s first power-play at 3:30. Farrell made it 2-0 at 4:52 when he one-timed a Thrun pass past Grabko at the bottom of the right circle. Junior Nick Abruzzese was credited with the secondary helper on Farrell’s second of the year.

“I think coming into this weekend it was huge for us to get two wins,” said sophomore Farrell. “We came out pretty hard to start both games, jumping on teams early so we are happy about that.”

“It’s really special for me growing up in the Boston area,” said the Hopkinton, MA native about his wait to play his first game for Harvard at home. “I’ve always dreamed of playing college hockey, coming to Harvard was a goal of mine for a long time so finally being able to wear the jersey and play in front of a bunch of my friends and family who were here was really special.”

Junior defenseman Ryan Siedem made it 3-0 Crimson on a four-on-four at 9:51 when he tapped in a rebound at the top of the Bentley crease. Casey Dornbach carried into the Bentley zone, dished to Thrun, who swung a pass across to Abruzzese for a slapshot that Grabko got enough of but had Siedem joined the rush on a four-on-two to notch his first of the season.

Farinacci struck again at 14:33 when he beat Grabko glove-side high for his second of the night, and season. Matthew Coronato feathered a pass from below the goal line to a wide-open Farinacci in front of Grabko. Farrell also assisted on the Crimson’s fourth goal.

Sophomore defenseman Drew Bavaro pulled one back for the Falcons at the 18-minute mark. Bavaro jumped into a Bentley three-on-two to streak in on Crimson goalie Mitchell Gibson (18 saves) and backhanded the puck over a sprawling Gibson. Bavaro’s fourth of the season was assisted by Phil Knies.

Farrell notched his second power-play goal of the game at 19:05. The Montreal Canadiens draft pick fired a shot from the top of the right circle past Grabko’s blocker for the 5-1 first period lead. Thrun and Abruzzese assisted on Farrell’s third of the year.

Bentley’s Knies made it 5-2 with a power-play strike at 1:33. Knies tipped a shot from the top of the right circle by freshman Cooper Connell past Gibson for his second of the year. Bavaro also assistwed on the goal.

Harvard sophomore Alex Laferriere scored at 4:40 to make it 6-2 Crimson. The Los Angeles Kings pick banged in a Jack Bar shot off the end boards past Grande. Laferriere kicked off the play with a shot on goal that Grande turned away but the rebound couldn’t be cleared by Bentley before Bar got to the loose puck.

Coronato put on a display to cap off the Crimson scoring at 17:18 of the second period. The first-year forward from Greenlawn, NY skated through the Bentley team to fire off a shot from the slot past Grande to make it 7-2 Crimson. Austin Wong and Thrun assisted on Coronato’s third of the year.

Bentley’s Kohei Sato notched his first as a Falcon at 8:30 of the third period to close out the offensive action as the score stood at 7-3 Harvard.  The grad student from Nishitokyo, Japan buried a pass from Matt Gosiewski that beat Gibson low.

“It was a good win for us,” said Crimson coach Ted Donato. “Obviously a Bentley team that’s been a dangerous team this year winning against Ohio St. and at BC (Boston College).”

“We certainly have some things that we need to improve on, but there’s a lot of good signs and anytime you can win the first two games of the season that’s a great start.”

The Crimson have their work cut out for them in the coming week as they host rival Cornell on Friday and Colgate on Saturday before traveling to Northeastern for a Monday night tilt at Matthews Arena.

Bentley drops back into conference play as they host Canisius on Friday and Saturday at Bentley Arena in Waltham, Ma.