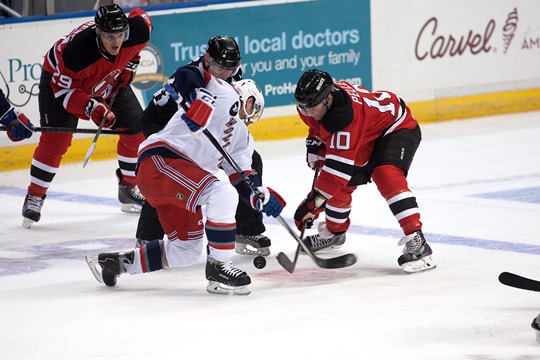 Hartford CT- Thursday night, the crowd at the XL Center seemed feverish, especially after a big 4-2 win the other night against the Binghamton Senators, and of course the still so hard to talk about shoot-out loss verse the Springfield Falcons, last Saturday. The Wolf Pack, with the help of their fans however, seem to really be kicking it up. Coming out for warm ups with intense smiles on their faces as they hear constant cheering from fans, they’re not ready to let anyone down despite their standings taking a tumble over the past few weeks do to a long stretch of losses. Thursday night was definitely a special one, the Hartford Wolf Pack (12-9-2-1) verse rival the Albany Devils (11-8-1-4). In the NHL, technically this would be a huge game. New York Rangers (Wolf Pack affiliate) and the New Jersey Devils (Albany’s affiliate), and we could see the tensions getting ready to flair just by the looks behind the clear helmet facemasks.

Taking the ice in the first period and only about 7 into the game, Wolf Pack’s #17, the dynamic, Chris Bourque caught a great rebound off the stick of #6 Ryan Malone, and #15 Marek Hirvik, and was able to slam the first goal past Devil’s goalie Scott Celmmenson. It didn’t stop there though, just a few minutes later another one of the Wolf Packs stars, Justin Vaive was able to capitalize on another great power play and finish an outstanding back door pass with the another great assist from Hirvik.

As hockey usually goes though, a 2-0 lead in the first few minutes of the period is great, but it still leaves plenty of time to catch up on the Devils end, and plenty of time to become too cocky on the Pack side. So it comes to no surprise that Albany’s #14, Reid Boucher with an accompanied assisted by #6 Mark Fraser were able to set up a great play, smacking it in the net from the blue line through traffic getting that slick one past Hartford’s goalie, Cedric Desjardins. Regardless of their lead, Hartford lagged in the shots on goal this period, not too much though, Albany, leading by 14 goals on shots and Hartford a few behind with only 11.

Going into the second period and after Boucher’s sudden goal the Wolf Pack decided to really step it up and not let their one goal lead get away from them. The Bourque’s stepped up their physical play, pushing and showing, not letting anyone tell him that they had the puck. Despite the differential sizes, both brothers have zero probablem with going after someone full force to keep the game on Wolf Pack terms. With Chris looking like a linebacker on one take down, resulting in a penalty, teammates mentioned, “[Chris Bourque) has no fear.”

However Bourque’s aggressive attitude did result in said penalty. Followed by another high stick penalty from the incredibly well rounded Oscar Lindberg who was called for high sticking, leaving Albany on a 5 – 3 power play advantage. Lindberg of course attempted to redeem himself, he seemed to be on top of everything, despite the penalty he was able to continue some well-played and smart hockey.

#9 Ryan Bourque was strong on the penalty kill, ending Albany’s 5 on 3 players advantage. Despite the turmoil, and penalties, Hartford found themselves ahead, deep into the game. Once again close to the ending of the second period the tough and equally talented, C. Bourque fired that third goal in with a quick flip of the wrist, zooming yet gain past Devil’s goalie, Clemmenson for Bourque’s second goal of the game. Post game, Chris Bourque said, “ Just put the pucks toward the net and good things will happen.” C. Bourque seems to be on point; he’s becoming a fiery leader on this team and certainly between him, his brother, Vaive and Lindberg- they seem to have everything going for them right now.

Ending the second period strong with the 3-1 lead and a plus record of shots on goal (Hartford 24 while Albany only 22). For this game, without a doubt we could see some definite Bourque brother work. Ray seemed to have taught his sons well.

The third period seemed a bit rocky at first, with Albany creeping back up adding another goal past Desjardins. In Desjardins defense, Devil’s center # 10, Rod Pelley assisted by #26, Ben Thomson had perfectly set their goal up off a rebound in the bottom corner of the goal. Was the lead getting to them? Malone had the perfect opportunity to snag a break away and secure the clinching goal for the Wolf Pack team however he missed his opportunity.

Holding their ground, with 47.6 seconds left, the Wolf Pack gained one more power play, and the Wolf Pack were able to hold onto the lead. Winning 3-2.

Next up is Friday night’s game back at the XL Center against the Worchester Sharks (10-10-2-0). Can the Wolf Pack keep it up? Can they climb back up in the ranks? We shall see.