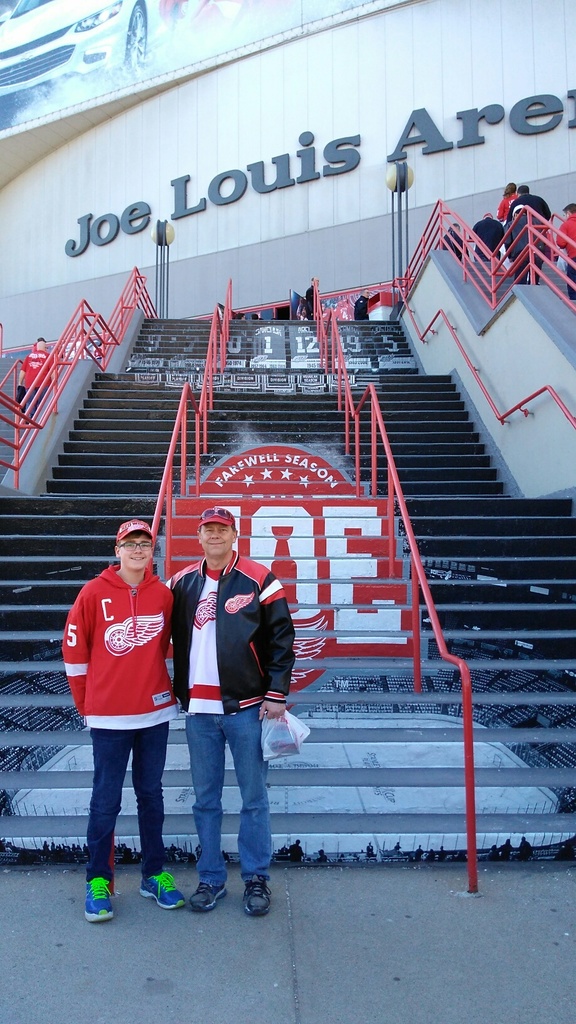 Growing Up and Growing Old

He saw his first game from there when he was two months old, though he didn’t know it of course. I know, though, because I’m his uncle, and I held him while he and his dad and I watched the Red Wings (on TV) win the Stanley Cup in 2002. It would be just the first of a series of encounters that culminate with his visit to the Joe Louis Arena this weekend, just as it’s about to shut.

Now, I’ll grant you that this is not a kid from Michigan we’re talking about. He’s an Ontarian. Lives in Maple Leafs country. Should by all rights be a fan of that team, though if he were, I don’t know how we’d get along. Certainly not as well as we do now. It’s a mutual respect thing. He gets that I love the Habs. I’m pretty OK with his adoration of the Red Wings.

For him, the Red Wings are deep in the blood, and it goes back way past 2002. His paternal grandfather was a fan of the team way back in the 1950s, the last time they were good before the present (or newly past) era. Daniel has grown up with the Wings, as his father, Phil, did. They love the team. And they love the Joe.

Along the way, he has been there several times. Each year, in fact, near the end of the season, he and his dad make the pilgrimage across the river while his younger sister swims in a meet in Windsor. Each time, in true innocent fashion, he goes with the hope of buying a souvenir. One year it was a certain hat. Another year a t-shirt. This year it was stuff, like always, but also one final memory of the place.

That the shirt got ripped by a schoolyard buddy didn’t bother this boy. He knew he’d be back again. Sometimes, he’s planning the trip as far back as Christmas, when I’m up in Canada to visit. He’ll tell me what he’s hoping for. And then he sends me a picture of his acquisition after their game. That’s easier now, since he’s old enough to be texting.

Friday, I got a photo on my phone. It was of the arena, visible from the comfortable distance of the family’s Windsor hotel room. They had arrived mid-day to see sister Sarah swim. But his mind was across the border, in Detroit. His mind was on the game he’d see on Saturday. The penultimate one at this place which is the only home he’s ever known for his team. And they did what everybody else is doing. They took in the old gal of a building one more time. They photographed it. They made some hopefully forever memories to add to the ones they already had.

Things will be different next year, though I doubt Daniel Reimer’s attitude will have changed. He’s disappointed now that his team hasn’t made the playoffs, nor his two backup squads—the Kings and the Jets. But he’s got baseball as a comfort, his interests ranging all over the leagues but centering on the Toronto Blue Jays as well as his own team, a Select squad playing in the Oshawa area.

But hockey is his true love, and come the fall, he’s going to have a new place to watch games from. He’ll look forward to the springtime pilgrimage as he does every year, whether Sarah makes the regional meet or not. But it won’t be to the stomping grounds he’s used to. It will be to Little Caesar’s Arena. Maybe by then, fans will have thought of a nickname for it. Little Joe. Big Joe. Hopefully they won’t be asking, What happened to you, Joe?

A few years from now, he’ll be making the trip with friends, maybe. Perhaps his passion for a souvenir will have mellowed. But he won’t have forgotten all the great players he’s seen in person over the years. Ask him to name them and he’ll list off Lidstrom first of all. Who knows who it might be in the future. Perhaps finally an early draft pick, which is a luxury the Wings haven’t had for a long while. Certainly a team with a renewed vigor having broken their playoff streak.

Things in the new place might be different. Some would promise they’ll be nicer. There will be a bigger revenue grab in terms of luxury seating in the new barn, and, I suppose, restaurant options that will dwarf the traditional hot dog of a hockey game, perhaps a grand and glorious team store. No doubt all of this will be brought to you by this corporation and that one.

None of that’s going to matter to Daniel. He’ll be more concerned with what happens on the ice, and he’ll be like I was when the Montreal Forum went away—convinced that nothing will be the same again. And you know what? It won’t be.

The new arena might be better, but it will never be the place of this kid’s childhood dreams. Detroit’s growing up, I guess, and so is Daniel. Inevitable, right? But that can be mixed with sadness, too, can’t it? It is for me regarding Daniel, who just turned 15 (though still a great kid with no sense of teenager brattiness invading his behavior), and it is for him regarding the Joe, which soon will turn into someplace the Red Wings used to play, if it continues to exist at all.

All photos credited to Daniel Reimer