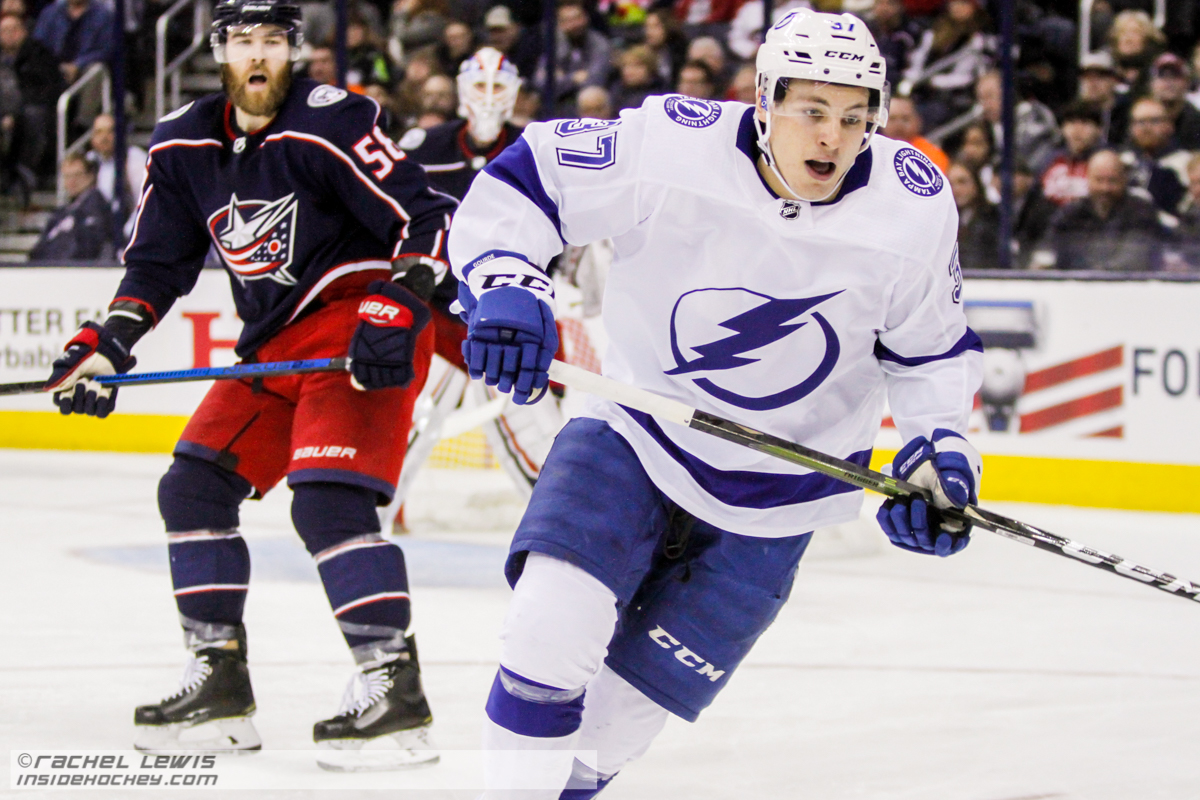 Tampa Bay’s Yanni Gourde scored at 2:50 into overtime as the Tampa Bay Lightning held off a stubborn Carolina come back and drew within one point of the Central Division leading Hurricanes with a 3-2 win in Amalie Arena Monday evening.

Gourde took a pass from Alex Killorn and fired a shot at Hurricanes goalie Petr Mrazak. The puck bounced off of Mrazak’s glove and Gourde followed the errant puck straight into the net for the game winner.

Things were chippy on the ice in the third period with the division rivals in a 2-2 deadlock.

Victor Hedman tripped Warren Foegle which sent the Hurricanes on the power play at 6:48 and then 1:23 into that power play, Craig Killorn delivered a massive hit on Martin Necas on the Lightning blue line.

Carolina’s Jake Gardiner then engaged Killorn and both were given five minute majors for fighting.

“Hitting is a part of the game,” said Lightning coach John Cooper. “I think we played pretty well before that and pretty well after that. The big thing for me was it took them off the power play.”

Killorn scored his 12th goal of the season at 14:42 in the  first period when Anthony Cirelli shot the puck down the board to Tyler Johnson, who corralled it at the blue line. Johnson then hit a charging Killorn for the 1-0 Tampa Bay lead.

Killorn juked Carolina goalie Petr Mrazak and tapped the puck over the left blocker of the spread-eagled Mraz to draw first blood.

Just 2:08 into the second period, center Brayden Point the scored on the redirect as he chipped in a wrist shot from Ondrej Palat after Palat shot it from behind the right circle. It was Points’ 300th career point and gave the Bolts a 2-0 lead.

It was also Point’s sixth power play goal of the season and his 19th overall.

Then, the Hurricanes fought back as they took advantage of their NHL leading power play at 9:59 as Andrei Svetchnikov scored four seconds into the man advantage.

Failure to cover the puck was lethal for the Lightning as it ricocheted to Doug Hamilton who fed Svetchnikov in the left circle as he drove the wrister into the five-hole on Lightning goalie Andrei Vasilevskiy to cut the lead to 2-1 at 10:03.

Late in the second it looked like Tampa Bay might once have an opportunity to extend the lead to two goals when Pat Maroon found himself in front of Mrazak alone with the puck.

His stick handling was good, but Mrazak’s glove was better as he knocked the shot away and it slid to the boards.

Carolina drew even at 2-2 in the third and traffic in front of the goal in the form of Sebastian Aho was the culprit.  Aho shaded Vasilevskiy’s right side and Brady Skjei fired the puck past Vasilevskiy for the tie.

Both teams played cautiously on both ends of the ice from there forward which forced the extra session.