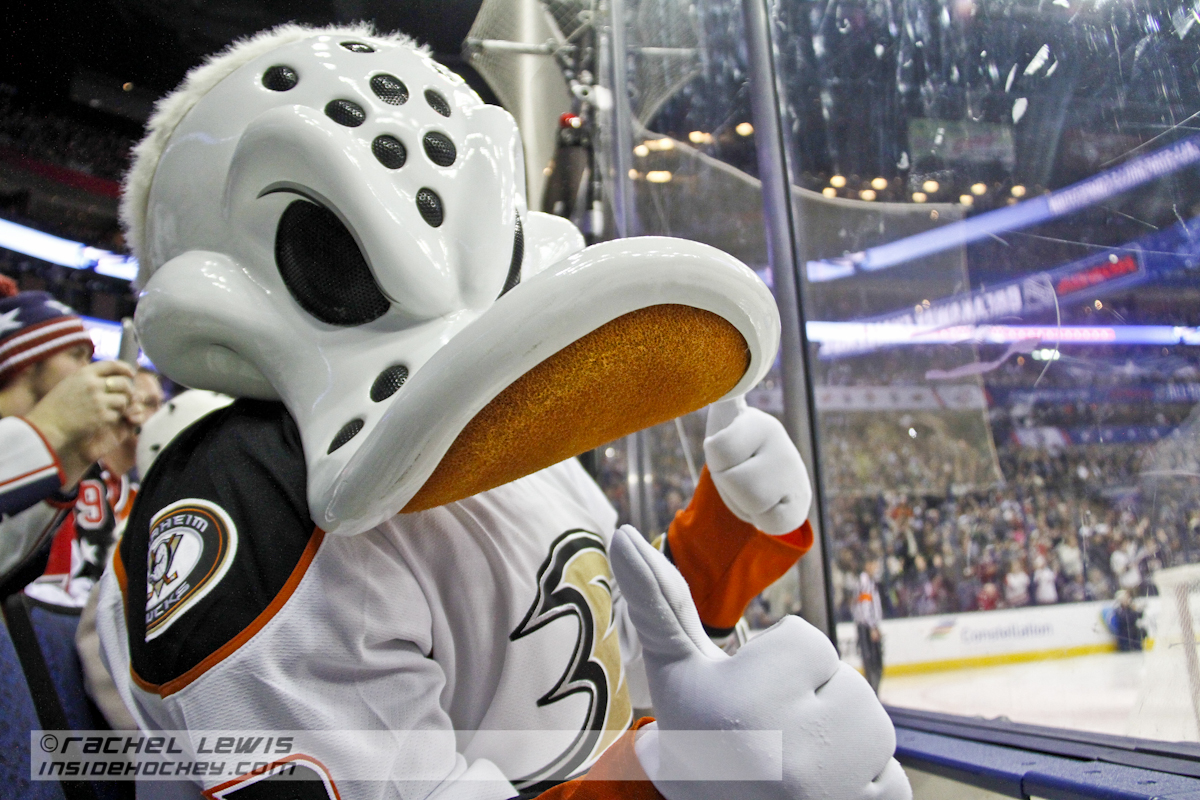 Wildwing from the Anaheim Ducks.

Got the Wrong Star

Goal scoring is good, and I’m the first to say I’d love to take NHL goalies to the car wash, hose off all their extra equipment, and put them back in to the net less as marshmallow men, so that shooters have some space to hit. But on Tuesday night, the Ducks played Dallas to a 2-0 victory in a game which was ten times the LA-Dallas game of the night before, when the teams had combined for ten total goals.

For the Ducks, it was precision work, and great netminding, that led the way. The credit all seemed to pile towards one person, though, which I thought was a shame. Both Andrew Cogliano and John Gibson were interviewed after the game, and for each, the questions came thick and fast, but boiled down to “How great was Jakob Silfverberg tonight?” The same question went to the coach, who complimented him on, “The way he worked the puck in the offensive zone, and specifically from the blueline in.” Then in talking about the team’s second goal, “That’s a textbook three-on-two. But the guy who made the play happen was Kesler driving the middle lane.” I’ll talk more about Cogliano’s goal in a moment, but for now just note who got all the credit. Cogliano was mentioned only at the end. “He’d had three or four really good opportunities to score tonight, and he finally put that one in.” Is that all?

Cogliano’s too polite to say it, but his impassive face was easy enough to read during his interview: Didn’t you see what I did out there? He had eight shots. Eight! Add to that two missed shots. His production was of a total of 38 for the team. Their SAT was 71, so he had a large chunk of that, too. Silfverberg had five shots, one blocked and two missed, and Kesler had four shots with one missed. The line’s total shot attempts thus were 23/71 on the night.

Cogliano said, “I thought I did a good job from the outset of having the mindset of shooting, and it ended up working out. Just one of those games where you come to the game ready and want to skate and want to play, and I thought out line right from the start was good.” OK, Mr. Understatement.

It was the consistent puck-chasing efforts of Cogliano which had Dallas reeling, and while the Stars delivered 34 shots (and 49 attempts) of their own, it was line three that won the Ducks this game, in the person of Cogliano. He said his line “doesn’t overthink it too much. This game and this league is all about consistency, and if you don’t have that, you tail off pretty quickly. We’ve been able to create a nice little game plan for ourselves, and I think our speed and our forechecking has created problems for defensemen.”

But then the media members asking questions turned it, asking about Silfverberg. Cogliano politely said, “He’s on another level now. I’ve always thought he’s one of the most underrated in the league, to be honest.” He added some more about how when Jakob is playing well, “He’s usually the best player on the ice,” but he could have ended that sentence with, “except when I play out of my mind, like I did tonight.”

Take period one. There he was, sprawled in front of the Dallas net, something having happened to upend him. He almost crawled back to the bench, but a shift later, there he was again, speeding into the zone and taking a shot, then following it into the corner and putting the rebound out to the point. After the ensuing point shot, he got the rebound and took a shot from near the goal line on the left side.

Cogliano is fast, make no mistake. The other two guys on his line do OK in that department too, but the knock on Cogliano is that he doesn’t always finish. There’s just that tiny skill gap that, if it were made up, would make his speed that much more deadly. On Tuesday, there was no gap.

Take period two, which has been famously bad for the Ducks over the past little while. The Cogliano (Kesler, or call it whatever) line took over early. They won the puck in the Dallas end but didn’t get a shot. A faceoff saw them regain possession of it, and it went–where else?–out to the point, where a soft wrister was played back to the cage. Cogliano and Silfverberg were banging away at it there.

A while later, Kesler took a penalty, and guess who was down to the Dallas end two-on-one shorthanded? Cogliano, with Vermette. Cogliano held the puck and then shot. It went off the goalie on the high body somewhere, and may have grazed the post after that.

Shortly after, there he was again, chasing a puck. He went to his knees and shot as he was getting back up. After the game, Silfverberg was described by Coach Carlyle as a man “possessed.” I’ll tell you where the good demons were on this night. They were sitting on Andrew Cogliano’s shoulder and whispering in his ear.

After the power play, Cogliano went down the left side and shot towards the long side, looking to pick the opposite corner. The puck went just wide.

The third period was similarly filled with this line’s exploits. Cogliano outlegged Radek Faksa to the puck down the ice, but then again, Dallas was looking tired all over the ice by this point.

Silfverberg carried the puck into the Dallas zone and fed it to Cogliano, who pushed it to Kesler. His shot forced the goalie into the splits to make the save. Shortly after, Cogliano and Silfverberg came in two-on-one again. It must have seemed to Dallas that he was never off the ice, though he played just 14:55, which was behind his linemates by three to four minutes and only eighth on the team amongst forwards in ice time, barely ahead of Joseph Cramarossa at 14:48. (That’s your ridiculous stat of the night.)

About Cogliano on this night, it’s perhaps best to ask the question how’d he do so much with so little? His goal came on a perfect three-on-two where Silfverberg held the puck, Kesler crashed the center, and Cogliano fanned out wide left. When he got it, he waited a half-second and snapped it from the dot and over the netminder’s right shoulder.

He scored the insurance goal, a marker that could easily have been the winner had Gibson let one in–and Dallas gave him plenty of chances to do that, with the effect that he made some spectacular and beautiful saves. His best, perhaps, was near the end of the third, when Dallas ended up with a bunch of guys in the slot on a broken play. The puck came to Lauri Korpikoski, who fired a low shot that I first though Gibson didn’t see. The replay showed him tracking it in and snapping out his left leg right in time to kick it away. John Klingberg was pinching down from his D position to get the rebound, which Gibson sealed off.

Two of the three linemates–the ones not called “Kesler” is one way to name them, the ones not going to the All-Star game would be another–were amongst the three stars, with the other one being Gibson. That, at least, was as it should have been. But Silfverberg, Gibson, Cogliano was exactly in the opposite order to what was correct. Cogliano was the game’s first star, with no doubt.

The Ducks now head out for a mini road trip, to Colorado and Arizona, before three games at home. They play five games in eight days during the upcoming stretch.

One interesting diss: when talking about the Cogliano line, Carlyle said, “They’re the model that we’d like our your players to pattern themselves after. Go out and grind things, be good on the defensive side of it, and when you get an opportunity, collect offensive points.” Exactly the three things that his “former” first line is not doing now. Of course Getzlaf is hurt. But take heart–Carlyle said he was nearly ready to play.