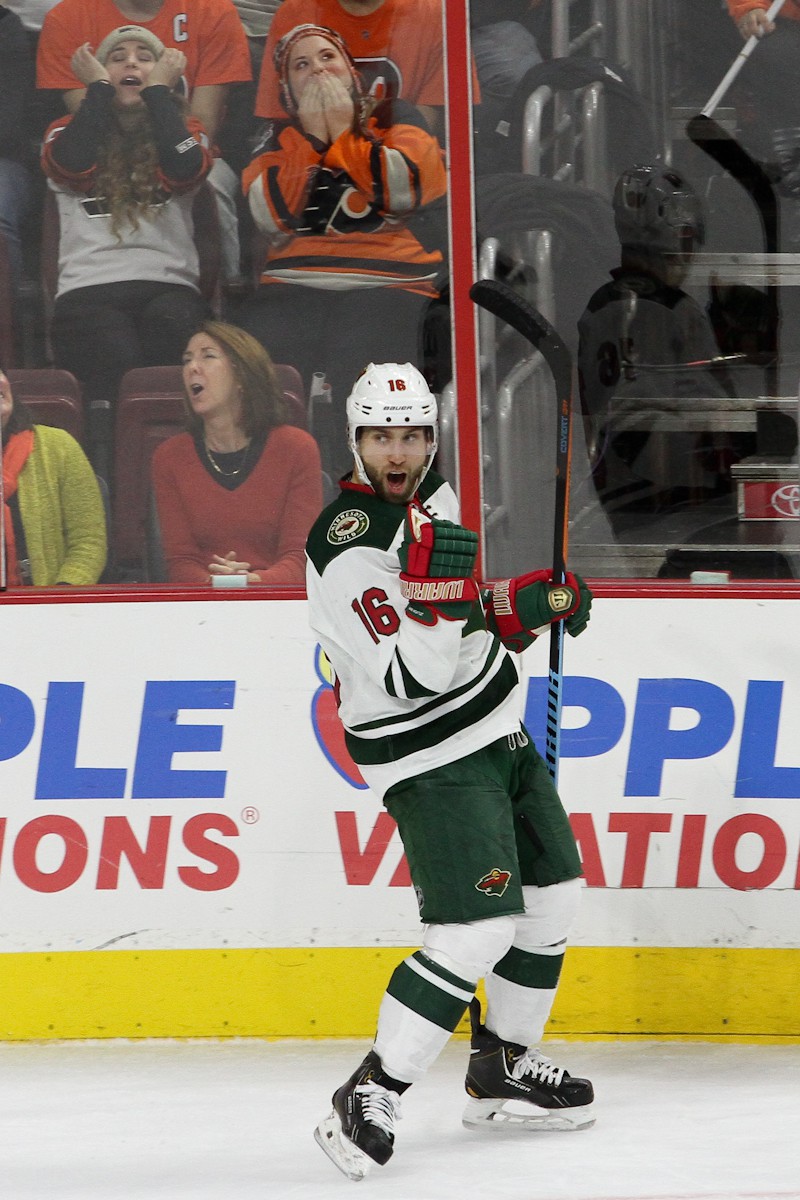 Good for the Psyche

For a team that went all the way to within a game of the Stanley Cup finals last spring, the Ducks couldn’t look much less familiar, or a whole lot less skillful, than they do this fall. The lineup is full of new faces due to trades, losses in free agency, and injury. For one thing, two familiar defensemen, Clayton Stoner and Simon Despres, are out on IR. That makes room for two to draw in, and one of them on Sunday night with the Wild in town was Korbinian Holzer. He is a somewhat unfamiliar face, having come over from Toronto in March though not appearing in the playoffs due to concussion.

He started the season in the AHL, with his call up this weekend from San Diego meaning a drive up the freeway rather than a trip across country on an airplane, a really great thing for the Ducks this year as opposed to what it has been over the past seasons.

Another unfamiliar face called up with Holzer, though not playing on Sunday, is rookie, that is, much-touted rookie, Shea Theodore, also a defenseman. He’s bound to get a turn soon.

Bieksa is also to be mentioned in this newbie-on-d context. But here’s some gossip for you: he’s not much liked, particularly by certain offensive players who have been the victims of his punishment in the past. That’s from an insider, but not anything like gospel truth. Just the word of someone who has made close observations of the lack of interactions between him and the team’s star players during practice and preseason training.

On offense, the Ducks are quite changed from last year. The first line, with the familiar “twins” of Getzlaf and Perry reunited after starting the season apart, now features Carl Hagelin on the wing. Is that a good idea? Well, Sunday night the trio was responsible for the team’s first goal and two-thirds of the second goal—of the game, not of the season. That first one came early on, with Getzlaf holding the puck around the net and feeding it out to the point for Fowler. He lofted a wrist shot in and scored. This was the second goal of the season, and it came at 10:08 of the first period.

The Wild tied it less than three minutes later, but the Ducks came back with a pass from Perry to the point in the person of Lindholm. At the time, Perry and Hagelin were on the ice along with Rakell after a line change. Anyway, Lindholm lofted a puck in and Rakell deflected it.

So that’s the new game plan. A forward, preferably numbered 10 or 15, wheels around the net and puts the puck to the point. The defenseman shoots it softly and it gets past a screened Devan Dubnyk. Worked twice, anyway.

But back to the accounting for unfamiliar faces. We’ve done Holzer, Theodore, Bieksa, and Hagelin. Who else is there? In net is Anton Khudobin, who made his Ducks debut the other night against Arizona. He was quickly relieved by Andersen. On Sunday, he reprised his earlier poor showing with strong play through all three periods. The most dangerous chances perhaps came midway, when Parise carried a puck to the net and saw it roll through the crease under the goalie and wide. He also had to stand in when the Wild crashed the net, making a good leg save in tight.

He also got a little luck of the iron when Koivu put a zinger off the post-crossbar while the Wild were on a power play. But on the night he was to let in only one while saving 34, and he talked about his game afterwards. “We start really well, scored the first goal. Game was going, going great. When you don’t win a lot, as we start, it’s always really tight, be we get that monkey off our back.” Kazakhstani accent, by the way.

When asked about getting put back in after the weak start (three goals on eight shots), he said, “I said to myself, ‘Don’t focus on anything, just shot after shot. One shot, next shot, third shot, and just keep going. Whatever the score going to be, whatever the game going to turn out, you just have to do it.’”

Coach Boudreau said that they wanted to get him back in after his weak start pretty quickly. “I really believed he was going to play really good tonight, because he’s been a good goalie all along. Sometimes you have a bad game, and you throw the guy right back in and he prove what he was, which is a really good goalie.”

He later added, “I really believe that goalies that have a bad game, good goalies, they come back and play a good game. We knew we didn’t want to leave him out there too long without playing, and we’d much prefer to play [him] against a really good team like Minnesota to try to get out of it than anything else. I knew he would do a really good job. Whether it’s a gut feeling or whatever, the decision was made even before the last game that Anton was going to play this game.”

And now to the forwards. Just one line of the four the Ducks iced on Sunday was a trio of familiar names. They were Silfverberg with Cogliano centered by Kesler. The first line we’ve dealt with above. That leaves Rakell and Sekac with Chris Stewart and Santorelli with Maroon and Shawn Horcoff.

Stewart came over in the summer, his prior year spent with Buffalo and then, as a late-season rental, with the Wild. He appeared in eight playoff games for Minnesota, with two assists.

Santorelli was a free agent acquired by the Ducks in August after he was dished from Toronto to Nashville late last season. He was in the lineup for Nashville in the post-season, notching a goal in four appearances. In the regular season, he finished up playing in 22 games for them and going 1-3-4 in points. He is 29 and has played 340 regular season games thus far. After the game Sunday, he commented on his impressions of the night. “We talked about getting pucks through. It was screened and got through to the net, and it was good to get it through early.” That was about the first goal. But his contribution was later in the game, when it was 2-1 Anaheim. More on that later.

Horcoff seems like he’s been in professional hockey as long as Jaromir Jagr somehow. But he’s just 37 years old. Come to think of it, that’s actually pretty old in hockey terms, right? His career spans over 950 games; he is poised thus to reach 1,000 this year.

To my mind, he’s not a huge guy, but the stats say 6’1” and 210, and his production makes him bigger than that, with nearly a .5 point a game. Don’t laugh. There are guys making many millions of dollars who score but 20 goals a year. He has 180 career goals thus far. That doesn’t guarantee anything with the Ducks, though. He was a healthy scratch on the 16th versus Colorado. So was Santorelli, for that matter. In more or less for the two of them that night were Wagner and Jackman, both out on Sunday.

So call that the attempt by the coach to shake things up, and it worked. Through two periods, the Ducks led 2-1, though they had a particularly weak second period in the shots department, recording just three. The Wild, by contrast, zinged 13 at Khudobin in the second frame.

The Ducks came out stronger in the third, with Rakell stickhandling his way through the whole Wild team for a chance on net that was saved. They then had a power play that failed, but they scored goal number three at 8:58 off a scramble in front of the net. The puck came out to the mid-slot, and Santorelli put it in. Of the goal, he said, “It was a great play by Patty [Maroon] to get the puck to the front of the net and a great play by Horc[off] to get it through [from the slot]. We want to help out and create any way we can.”

The Ducks added an empty net goal at the end, with a clearing shot that came all the way from their end boards and drifted into the net. Lindholm got that one. The game ended 4-1.

Maybe it’s not so strange that the Ducks were in no way rolling in their first handful of games. They just had too much adjustment to make. Now that they’ve put a nice win in the column, things might be righting themselves in Anaheim.

“Getting two points was a really good thing for the psyche of the group, but let’s just hope it’s not a satisfactory thing and we can go on from there,” the coach summarized. “It’ll make him [himself] sleep a little bit better; that’s for sure.”

He later said, “We’re not great right now. We’re not out of the woods, but it was a step in the right direction the last two games.”

Boudreau called this game, “a great test for us. Now we know how good we’ve got to play. We made mistakes quite a few times because they were right on top of us, but we’ll get better from it.”

The Ducks now head off to the road for five tough games against Nashville, Minnesota again, then Chicago, Dallas, and St. Louis.

And how about reading my books? There are six of them, so you’ve got lots of choice. The latest, Facing Wayne Gretzky.