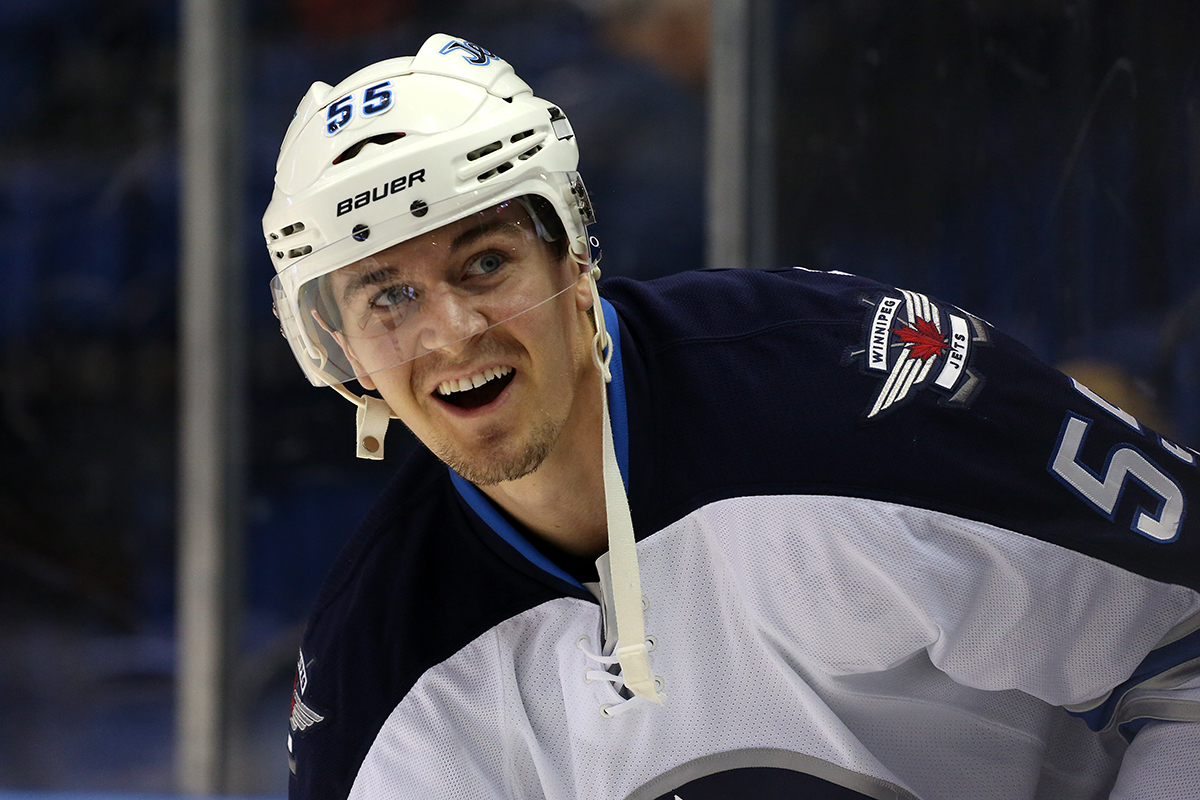 Boudreau’s exits from the playoffs. Winnipeg’s goalie magic. The Ducks’ goalie question mark. These hung over the first game of the Jets-Anaheim series which got off to a start at an Orange-County-unfamiliar time of 7:30pm Thursday night. Come to think of it, even the day was one that doesn’t often feature NHL hockey in the OC. It’s the Kings who play on that day normally, with the Ducks playing oftentimes on Wednesday and Friday nights.

Perhaps that’s why the crowd was late-arriving and sedate when they did get to the Honda Center. The warm-up began at 7:02pm, and at that time, perhaps a couple of thousand people were sitting in the stands. They made some noise, but it was hardly a raucous entry.

I’m just betting that the fans in Winnipeg are going to be there, en masse, at the very first moment their boys take the ice on Monday. And I’ll also wager that they’ll make more noise than the OC crowd did. Through two periods, there was barely a peep amongst the sellout spectators, except during the brief time the Ducks held the lead. But since that was just .49 seconds, it was hardly enough to get any real buzz going.

It was the playoffs, but it hardly felt like it.

On top of that was the weak intro the Ducks used. Give them credit, it was not the playoff entry video that they’ve used in the past. But it was all at the same, even, level of volume. There was no crescendo. No thrill. It almost went unnoticed.

Something else: instead of taking advantage of one of the buzzfeed stories that had been going around the internet—the Selanne-Winnipeg connection—the Ducks failed to used it, failed even to show the Finnish Flash on screen until 9 minutes remained in the period one-two break. At that time, he appeared on the video board, but nobody was watching. After all, it was the period break, and most fans were out in the lobbies smoking. Oh wait, it’s not the 1970s anymore. Well, out in the lobby hanging out, anyway. Selanne fell flat. He got a bigger reception when he reappeared, alongside George Parros, during period two.

By that time, the Ducks needed all the help they could get. They were down 2-1, but they looked flat. They were nowhere near the Winnipeg net. Their big line, on this evening Perry-Getzlaf-Maroon, often had two guys behind the net, but rarely one in front of it. They were on the ice for goal one, and in fact, set up the wrister by Vatanen with a pair of passes, but it was at the end of their shift, and so a large responsibility for the goal was on Emerson Etem, who was backing into the front of the net area as the puck came off Vatanen’s stick and thus providing a screen that fooled Ondrej Pavelec.

The Jets, meanwhile, were steadily hitting and passing the puck, but they were not awesome. They were just a little better than Anaheim. And then they got stupid. That is, they started taking penalties.

The first one that hurt came at the end of period two, an offensive-zone roughing minor on Schiefele. The Ducks got a goal on that one at 1:09 of the third. The next one came at 3:06 of the third. The Ducks converted on that at five minutes even. To this point, they were up in shots, too. It was 25-17 before the midway point of period three. When Corey Perry scored (shorthanded as it turned out—story just below), things were more or less sealed in Anaheim’s favor. Funny though—the goal was originally not called by either referee.

Perry raised his stick, but play went on. For more than a minute. It only stopped when, at 5:37 left, a penalty was called on Clayton Stoner. A long pause ensued. There were no replays on the big board. Fans were relatively quiet. Nobody quite knew what to expect.

And then they announced the goal. The clock was wound back to 6:39 to go, and the penalty stood. They faced off at center. It was a play that at least two players, Sami Vatanen and goalie Andersen, said they had never seen before. Think about it—a penalty on a play that never happened, and thus a goal that was labeled a shortie.

For the record, this was not, really a shorthanded goal, because of those strange circumstances just described, but it was listed as one. The Ducks didn’t care. They were up 3-2. And they scored one more, a legit goal, not an empty net one, with about three minutes left to go. It was on another power play. Getzlaf took the puck out of the corner, wheeled from the dot, and scored.

Corey Perry talked about it afterwards: “I had a good feeling” on the goal he appeared to score (and did). “It looked like his pad was over the line, and I thought for sure, at the angle of it, that the puck was over the line.” He later added that the team had had a good start, “you really want to step up and lead by example,” he said, and that his line (with Maroon, as was noted) had played well as a whole.

“We needed to get this first one, and then you keep looking forward. I thought we moved the puck well, passing it around, everyone moving.” The latter was his description of his power play goal. “Getzy’s goal was a great shot, and Paddy [Maroon] was right in front, doing what he does. I thought the game was everything it was going to be.” He said that “it’s only going to get more physical, and it’s going to be more of a grind.”

The crowd, to credit them, got more energetic as the game went on. IH talked to some fans about this, noting the sedate atmosphere in the first two periods. “Well, they finally gave us something to cheer about,” was the response. The 4-2 win, in which Perry got points on every goal, including scoring two of them, was his best playoff point total to date.

The Jets, after starting out well, had to be disappointed that they did not sustain it, because despite the fan’s opinion above, it was not so much Anaheim getting better as Winnipeg starting to unravel that was the story. Tyler Myers said, “We can definitely be more disciplined. It was what we expected—they’re a big team, we’re a big team, it’s playoff hockey, everyone expected a physical game—but our power play needs to be better. It was ultimately the difference tonight. I think you want to come out in the third period, and no matter what the situation is, you’ve got to have the same attack mindset we had in the first two periods. We’re not saying that they’re not going to have their chances, but we can attack better than we did in the third.”

And Paul Maurice, ever-so-calmly, reminded his players in the press that they needed to do some settling down: “We got an effort. It was a hard played, good battle game.” Then came the contradiction: “I like us through two periods. It is tough to give up a goal to start a game. We knew the push was coming. But in the blowup in the third period, we got some momentum back.” He then said, “I was really pleased with out start. Our execution.” He added that he thought the game could have gone 3-1 when the Jets were ahead by one goal, and suggested that if that had happened, the Ducks might not have been able to get it back.

But he also went over the Ducks’ two power play goals and explained them away as having gone in off skates and so on. He followed up with, “I didn’t feel that their power play was momentum-changing, but clearly it was.”

Hmm. Looks like he kind of starts talking before he figures out what his message is, and then slides onto message as he goes. But he also said something quite plain. “They are a good team, and this is their first game at home.” He wasn’t surprised that the Ducks came out hard. “I was happy with the game for the most part. All of the five-on-five. They scored some power play goals, but I liked our game.”

Nice to say, but kind of not what the third period looked like, even to his own players. But you’ve got to think they’ll be better, and smarter, on Saturday.

Then he turned to the power play. “In the end, I special teams won the game for us, and that hasn’t happened too often this year.” He noted that both teams are big, and that they both played a physical game. He didn’t know whether it would continue, but he said that the animosity would continue to grow. “You play seven games like that, and you’re going to start to dislike people at the end of that.”

The backup on the evening was Jason LaBarbera, who has appeared in eight playoff series without ever getting into a game. He is in there because John Gibson got an upper-body injury in practice Friday, believed to be an arm injury.

The good news? That relieved the anxiety about their being a goalie controversy, and perhaps keeps Boudreau’s hook hand from working too quickly, as it has in the past.

The bad news? Much as people love LaBarbera, he is not exactly someone who inspires entire confidence should he have to go in.

The scratches for Anaheim were Holzer, Fleischmann, Wisniewski, Thompson (hurt) and Sekac. In other words, most of the guys the Ducks have acquired at the start of the season and at the trade deadline. Odd.