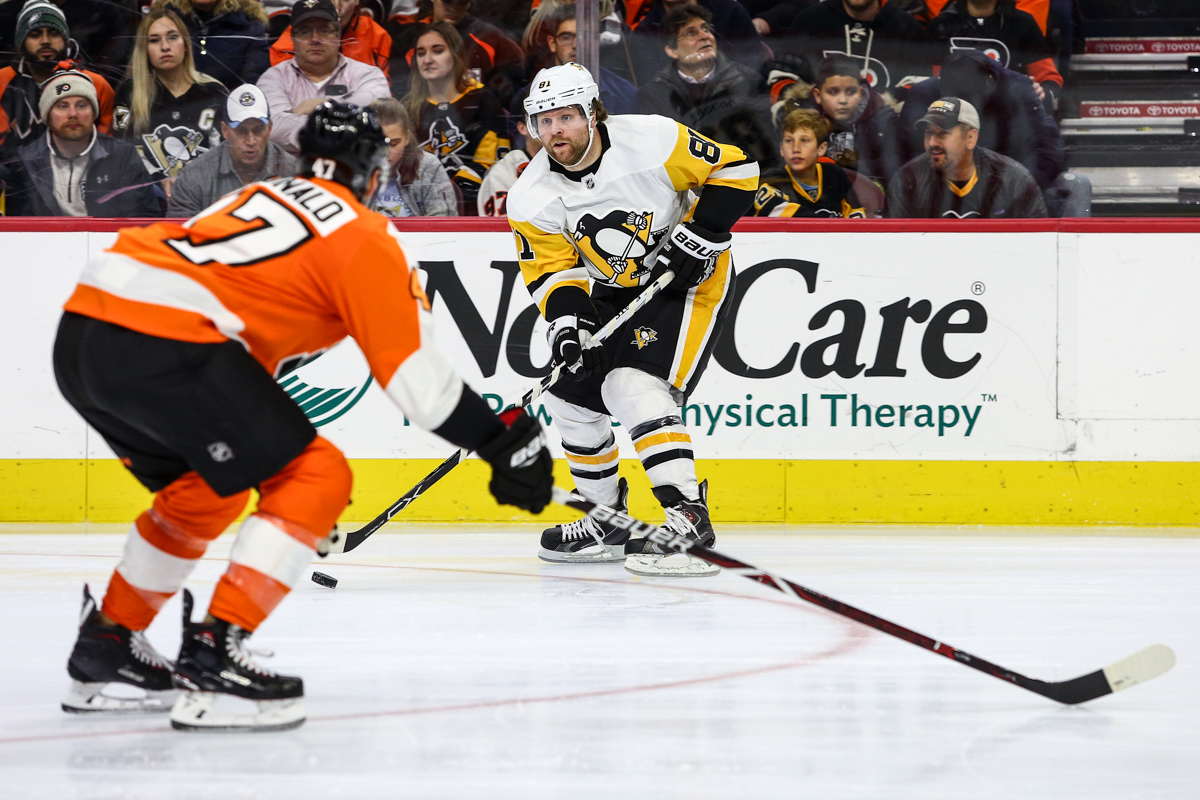 Pittsburgh’s Evgeni Malkin had already gotten the all-important first goal just 4:33 into the contest, draining much of the energy out of the home crowd. But the Flyers weren’t about to roll over.

Midway through the opening frame, the home team started to tilt the ice. With an extended shift of nearly two minutes in the offensive zone, the Flyers were pressing. The tying goal seemed like it was only a matter of time.

A goal was coming, all right. Unfortunately for Philadelphia, it went the other way.

With that wrister through goalie Brian Elliott’s five-hole – and, judging by Elliott’s reaction, he might still be wondering where the puck went – Phil Kessel brought the Flyers’ momentum to a screeching halt.

“He doesn’t need a lot of chances,” head coach Mike Sullivan said. “He has the ability to finish.”

“We like his chances from there, and he buried it,” captain Sidney Crosby said. “They could’ve scored on that shift and maybe it’s a different game. We did a good job of just holding on, then we capitalized on a great chance there. Those are momentum swings in games.”

The 2-0 score was all that Pittsburgh would need.

They’d score more, of course, because the Penguins don’t play the Flyers without scoring five times or better. That’s how it’s gone in seven of eight meetings with their cross-commonwealth rivals this season, and it’s always been a winning recipe.

They added goals from Kris Letang and Crosby in the second period, and Riley Sheahan piled on the fifth with about four minutes remaining in the game. Crosby’s goal, a tuck-in from behind the net, made him the Penguins’ all-time postseason points leader, besting legend and team owner Mario Lemieux. It was fitting that it came against the Flyers, who Crosby has tormented with 32 points (14G, 18A) in 21 postseason games.

“He’s in elite company,” Sullivan said. “I think that Sid has accomplished that at this point is a testament to his talent level but also his work ethic. He’s played in a lot of playoff games, he’s led this team to a lot of playoff success, and that’s the player and person I’ve really grown to respect.”

Pittsburgh won the special teams battle, with Malkin’s opening tally on the power play holding up as the game-winner. The penalty kill, meanwhile, held the Flyers off on their four chances with the man-advantage, including nearly four minutes on a double-minor to Malkin to end the second period.

“I think we’re blocking shots,” Letang said. “We play tight, and it doesn’t allow them to use that pocket and make those plays.”

“The Flyers have a real dynamic offense, and they’re hard to play against,” Sullivan said. “They have as good a transition game as there is, and they generate a lot from their blueline. I give our players credit; I think we’re making good decisions with the puck. They’ve played extremely hard.”

The Penguins also got some heroics from netminder Matt Murray, who’s keeping pace with former battery mate Marc-Andre Fleury, now of the Vegas Golden Knights, atop the postseason leaderboard. Murray matched Fleury with his second shutout in four games. He’s allowed just five goals – four in Game 2, one in Game 3 – on 96 shots for a 1.27 goals-against average and .948 save percentage.

Murray’s timely stops on the night included this gem against one of the Flyers’ most exciting young players, Travis Konecny, who was sprung on a breakaway as he came out of the penalty box with less than a minute remaining in the first period. A goal would’ve cut the Flyers’ lead to 2-1 and provided a big surge as they headed into the intermission.

“When you get those types of saves, it certainly helps your team’s chances of winning,” Sullivan said. “That’s what Matt does for our group. I thought he was locked in all night long.”

“He was solid again, and that’s what Matt brings us,” Letang said. “When you’re getting bombed from every angle, he’s just so calm in his net, and he makes the key saves for us.”

Murray also reached a milestone in Game 4, becoming the fastest goalie to 25 wins in the playoffs. He reached it in just 36 games, faster than five Hall of Famers – Bill Durnan, Terry Sawchuk, Gerry Cheevers, Grant Fuhr and Patrick Roy – who got there in 37.

The Penguins battled to the win without one of their most indispensable players, winger Patric Hornqvist, who’s day-to-day with an upper-body injury. Their injury misfortune was more than matched, though, by the Flyers’ loss of Sean Couturier, who was hurt in a practice collision on Tuesday. Always a strong defensive forward, Couturier has had a breakout offensive season paired with captain Claude Giroux.

With the Flyers on the brink of elimination, the teams head back to Pittsburgh for Friday’s Game 5.

“We know it’s going to be a tough and desperate team that we’re going to be facing, so I think you always look to match that urgency to get the fourth one,” Crosby said. “We expect a tough game at home, so we’ll have to be ready.”

“We know [the fourth] is the most tough game to win,” Malkin agreed. “But we have experience, we have confidence right now, and we play at home. It’s the best moment to win.”