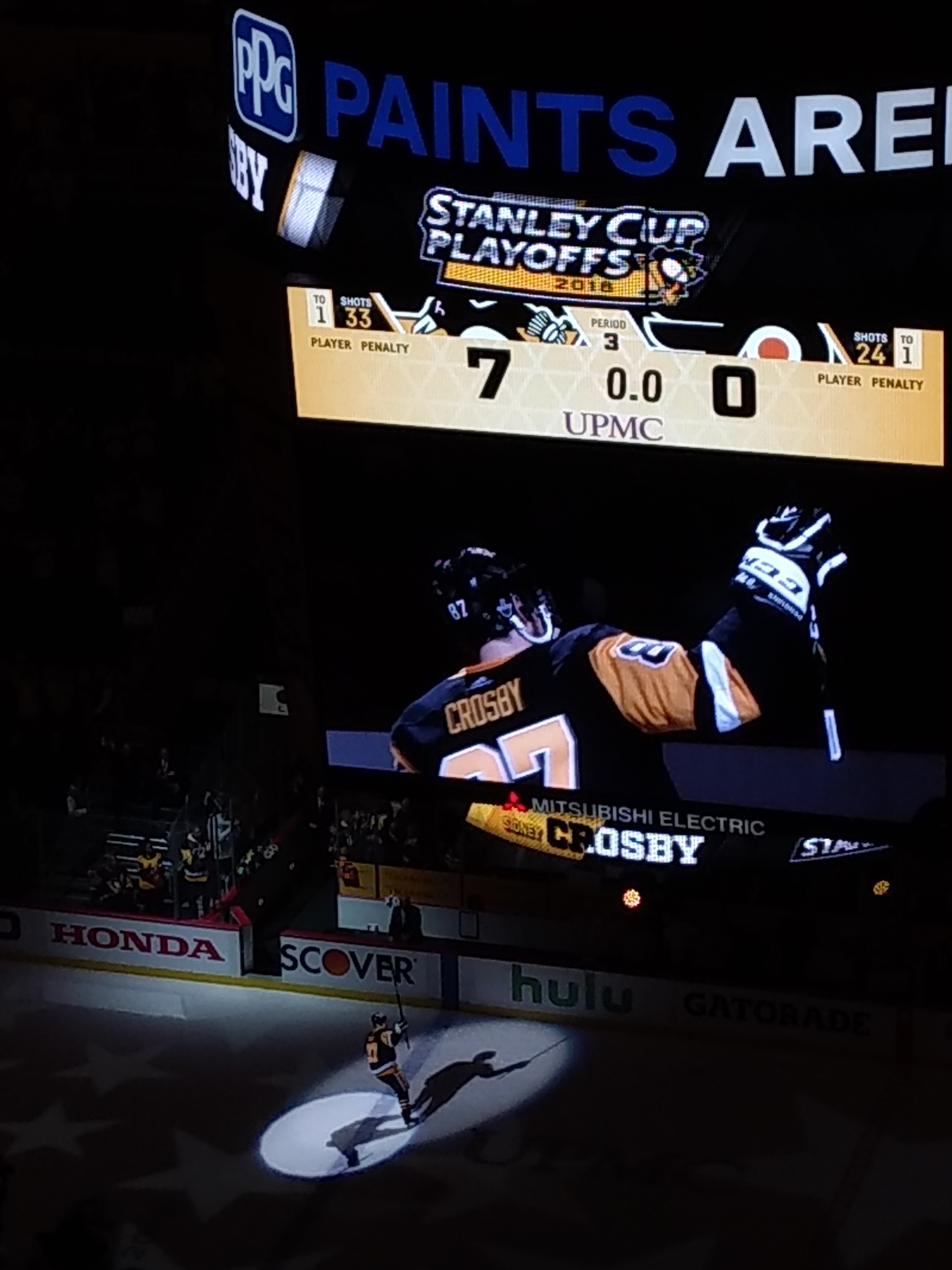 The Penguins opened Game 1 of the 2018 playoffs with the familiar, powerful voice of Chris Cornell filling PPG Paints Arena on Audioslave’s “Cochise,” just as it had through their back-to-back championship runs.

They followed that with a big shot of adrenaline, as Pittsburgh Steelers linebacker Ryan Shazier, recovering from spinal surgery, stood by the Penguins’ bench without support and waved a rally towel.

Then they got to work against their rivals from the eastern side of the commonwealth.

It took just 2:38 for Bryan Rust, always a big-time playoff performer, to net the first goal of the Penguins’ postseason and give them a 1-0 lead.

Six minutes later, Pittsburgh got the kind of break that can swing momentum in the Stanley Cup playoffs. Flyers winger Scott Laughton had goalie Matt Murray beat – then fanned on the shot. That gave Murray, who’s been slow to return to form since returning from a concussion in March, enough time to make a big follow-up save.

Scott Laughton gets a great chance in front but can't put it by Murray. pic.twitter.com/SXaNx9Jpc6

“It’s huge,” said Penguins captain Sidney Crosby. “If that goes in, it’s 1-1, and maybe we’re talking about a different result.”

“We could hear the chatter on the bench when Matt made that save for us,” said Penguins head coach Mike Sullivan. “That’s the type of impact it has on both the team and the game.”

Pittsburgh followed that up with a big offensive-zone shift from the fourth line of Zach Aston-Reese, Riley Sheahan and Tom Kuhnhackl. Sheahan kept the puck in at the blue line to facilitate a partial line change, then got it to a fresh Patric Hornqvist, who set up Carl Hagelin to pad the score to 2-0.

“It was one of the more impactful [shifts] for sure, and that’s what that line can potentially bring to our team,” Sullivan said. “That’s a really solid, 200-foot line. We have a comfort level with playing that line against anyone. [They] can help us get momentum, and I thought they did that on a number of occasions tonight. That’s an invaluable part of helping this team win.”

A few minutes later, Evgeni Malkin, the Penguins’ most dominant player through the second half of the season, scored on a spectacular individual effort.

evgeni malkin with a sensational individual effort for a ridiculous goal pic.twitter.com/wYEiC2JahO

The Penguins’ 3-0 lead came at the expense of some not-too-shabby players in Claude Giroux, Sean Couturier and Shayne Gostisbehere, who were on the ice for all three goals. And Pittsburgh never looked back.

In the second period, Jake Guentzel, the sophomore winger who broke out playing on Crosby’s wing in last year’s Cup run, got his first of this postseason on a feed from center Derick Brassard, acquired at the trade deadline for his big-game pedigree.

Just 1:11 later, Crosby struck for one of his patented, mid-air redirects.

Crosby is at it again. pic.twitter.com/ic5kx3yH23

“You’ve got to go to the net this time of year; that’s where pucks are,” Crosby said. “They don’t always go in, so it’s great to see it go in.”

“They’re two highlight-type goals from elite players,” Sullivan said of Malkin and Crosby’s tallies. “Sometimes we marvel over what they do out their with their talent and their instincts. As their coaches, sometimes you take it for granted. They’re exciting to watch; they’re certainly inspirational goals for our team.”

That made it 5-0, and that was all for Philadelphia starting netminder Brian Elliott as head coach Dave Hakstol went to backup Petr Mrazek.

“It’s a tough night,” Hakstol said. “We left him in there after the first [period] and even after the fourth [goal] because I thought there was a lot of areas of his game where he was seeing the game, he was battling hard, and you just want to give him that opportunity to battle through.

“After the fifth, I just wanted to get him out of there. I thought Petr did a pretty good job coming in and giving us a chance to try to settle it down.”

But Crosby wasn’t done. The Penguins captain put home two more in a three-minute span of the third period to make the score 7-0 and collect the hat trick over the team he’s tormented with more goals than any other.

“It doesn’t matter [which opponent is] in front of him; he’s just a tremendous player,” defenseman Kris Letang said. “He wants to be the best and he works to be the best, and it shows in his game.”

It’s the fifth time this season that the Penguins have scored five or more goals to beat the Flyers, but Sullivan was more impressed with his team’s effort on the other side of the puck.

“They have some elite players who can make plays,” Sullivan said of the Flyers, who the Penguins held to just 24 shots. “When I look back on the whole, 60-minute effort, I think it was just a commitment to defend and play the game the right way. That was as good a commitment to playing defense as we’ve had.”

Game 2 is Friday in Pittsburgh, and this experienced Penguins club will be cautious not to get too high after their dominant Game 1 performance.

“It’s a good start,” Letang said. “There’s a lot of things we did well, but in the first they got two or three quality scoring chances. They’re a really dangerous rush team, so we’ve got to clean up that part of our game and I think we’ll go in the right direction.

“They’re going to bring their best effort for Game 2, and we have to be ready for it and play the same way, or even better.”