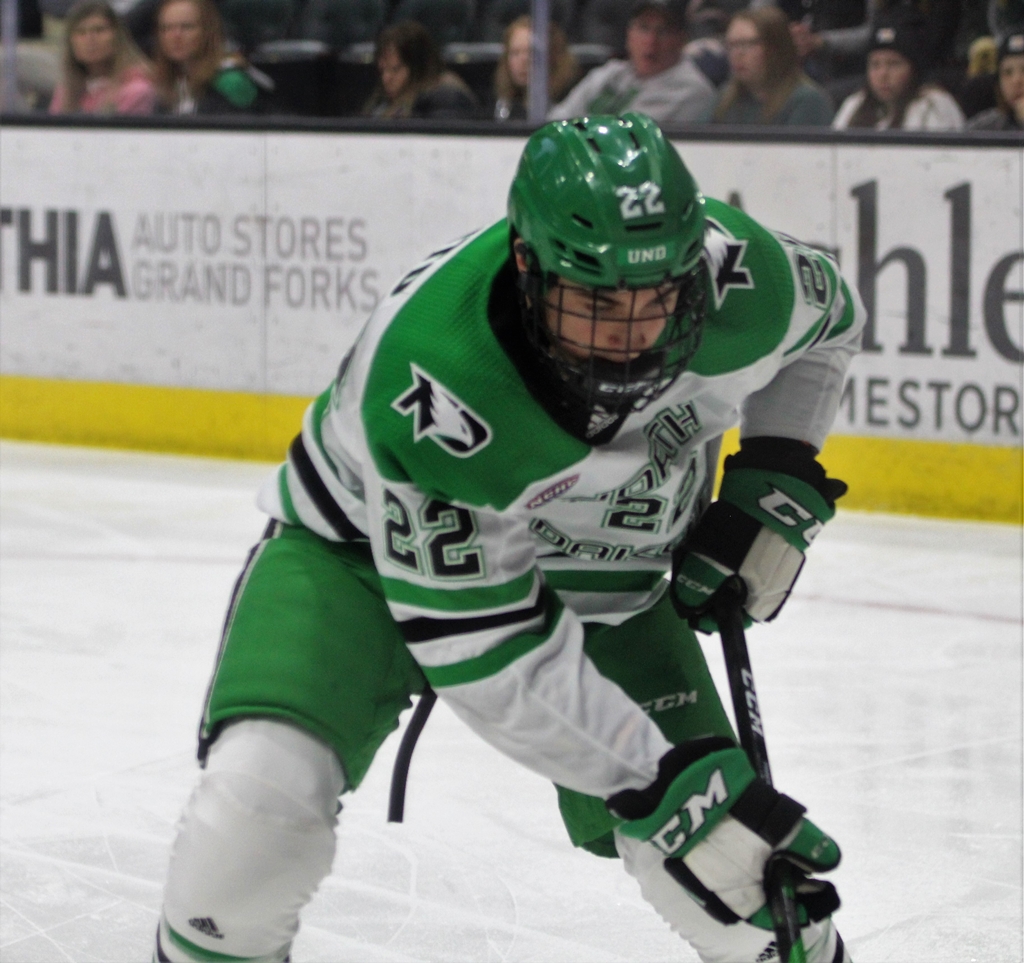 “We just got to find a way to battle through and play hockey and win a hockey game,” senior captain Jordan Kawaguchi said.  “We have guys off at a World Junior camp and everything, but it’s next man up mentality. We have to do what we can to win hockey games, and we’re just not doing that right now. We have to figure that out in our group and get back out tomorrow.”

On Sunday, it was a much better effort, the Hawks came out and played on their toes. They came out with a lot of energy and didn’t have to chase the game. The Hawks scored two goals in the first, one in the second, and three in the third.

The Hawks took a three-goal lead before the Broncos began to fight back. In the second period, Broncos forecheck started causing problems in the Fighting Hawks end. This led to a couple of goals from Ethen Frank, Brett Van Os to make it a 3-2 game UND.

“In the last couple of games, we have done a lot better of having that energy, but making it detail and energy, where we’re in the right spots, but also wreaking havoc on them,” Western forward Drew Worrad said.

Kawaguchi would spend most of the second period and a good chunk of the third serving a 10-minute misconduct. When Kawaguchi returned to the ice his presence was immediately felt. Twenty-seven seconds after Van Os scored for the Broncos, Riese Gaber would score his team-leading fifth goal of the season. Assisting on Gaber’s goal, Kawaguchi, and Pinto. With that assist, Kawaguchi now has at least a point in each game (2g-7a–9pts).

“I thought we started pretty well,” head coach Brad Berry said. “It was back and forth during the first period, but we made a couple of plays to get the lead. I think that was very important. Over the last couple of games, we were trying to chase games, and now trying to have the lead, that was a big deal for us. I am proud of the way our guys started. We are undermanned on the back end, and I thought our guys did a good job of having some shift management, some puck management, through their game back there.”

Does anyone see a pattern? Freshman forward Riese Gaber has made an immediate impact on the UND Hockey team. He’s becoming a human highlight reel. Through seven games, the Gilbert Plains, Manitoba native has scored (5g-1a–6pts). He’s also a plus-two. He’s been compared to former UND hockey players Drake Caggiula and Brock Boeser. His play on the ice has made him a fan favorite already.

The powerplay unit strikes again! Gaber steers the puck in off the shot from Kiersted! @UNDmhockey#UNDproud | @MidcoSN pic.twitter.com/RzqtQAwEXJ

Help on the Way?

With the lineup getting thinner, I asked coach Berry if he’s considered bringing in a player at the semester break.

“No, we haven’t, right now,” Berry said. “We want to persevere and get through this pod with the group that we have. There are some thoughts of different things going forward. I think there are a lot of things in play that have to happen for that. It’s not ruled out, but we want to make sure that we are digging in with our guys here.”

UND has a couple of days off and plays St. Cloud State on Wednesday night at 7:35 pm.