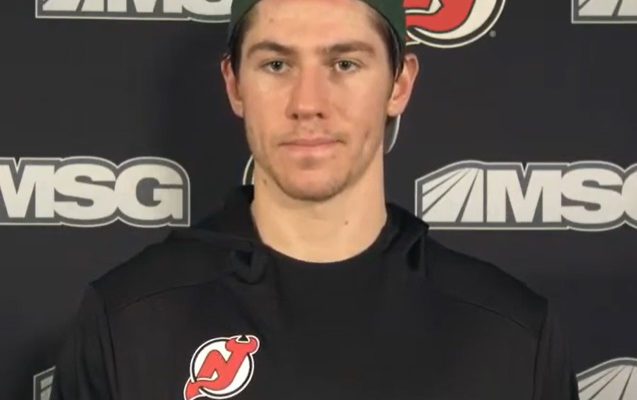 Nate Bastian, pictured, speaks to the media virtually on Thursday.

With the Devils and Penguins set to face each other for the first time this season, Pittsburgh, a veteran-heavy club will get their first look at the young New Jersey squad, complete with eight lineup regulars under the age of 24.

On Tuesday, it was Yegor Sharangovich, 22, that started the scoring and help end a four-game losing skid and 11-game winless streak at home, as the Devils skated passed the supremely-struggling Sabres, 3-2. In back-to-back showings against the Islanders, Janne Kuokkanen, 22, scored twice including once in Sunday’s 3-2 shootout loss–Sharangovich with the regulation equalizer 16:04 into the second before a would-be OT-winner from P.K. Subban was called back for offsides.

Jack Hughes is still a teenager and is finding his way, but has had games of real dominance in possession numbers and should be a headache for other teams as the 2019-first overall pick continues his career. Jesper Bratt probably would have benefited from having a training camp after missing the start of the season as he and his representation negotiated a contract extension and had another layoff from the team three games in following a two-week pause due to multiple positive COVID cases in February. Mackenize Blackwood turned 24 prior to the start of the season, but with the prototypical timeline for goaltenders, his numbers aren’t much of a cause for concern–as the team finds its way, he looks to be the answer in net.

With all that young, hopeful talent to keep your eye on, Nate Bastian might not come to mind right away. But as the Devils get set to finally cross off every team in this season’s makeshift division off their list, it’ll be the Penguins turn to find out how frustrating the six-foot-four, 23-year-old has been this season. But at Thursday’s skate, the winger was slotted to the right of Hughes with Miles Wood opposite him on the left wing. It’s the latest try by head coach, Lindy Ruff to get 86 some more space and chances. And just as it opens the door for Hughes’ to succeed, it’s a big chance for Bastian as well.

“It’s a big opportunity,” Bastian said. Any time you can get on the ice with a special player like that. I’m pretty confident in my game and know my role. So I know kind of where I fit on the line and I know that if I get a chance to get the puck to (Hughes), I’ll do that and get to the net. I’m excited.”

Ruff added to just how that could look and give a new dimension to this line.

“What he gives him (Hughes) is a player that’ll go to the net,” Ruff said. “You saw last game Nate was right in front of the net for one of the goals. A line sometimes needs that mix, needs that guy. I wouldn’t read a lot into lines–certain lines today were because of penalty killing–but Nate’s a guy I’d like to try him up there to see if he can give that element.”

Bastian, who has two goals and four helpers on the season, has spent most of the season on the fourth line, which for a stretch of Devils’ success saw him with Wood and Michael McLeod. But, as Ruff continues to try out some of his options it appears he’ll turn to a big, physical, in-your-face type. He has a team-leading 74 hits on the season–26 more than anyone else on the team, all while averaging under 12 minutes per-game.

“I like to consider myself a complimentary guy,” he said. “I think I can fit in well with guys like that–give the puck to me, give it back. When (Hughes) is flying around the zone and making plays, whether I’m trying to get open or just get right in front of the net and get in front of the goalie’s eyes, I think I can be pretty useful that way.”

Of course a complimentary player isn’t the same as a complementing player. With his hitting frequency and some jawing, as witnessed on Tuesday featuring the struggling Sabres’ winger, Jeff Skinner, you don’t need 18 minutes to make an impact.  I’d need to enlist the help from Jomboy on this one, but it sure looked like Bastian was “encouraging” the ex-30 and 40-goal scorer who has been snake-bitten as of late to go score some more goals instead.

Conversation got heated after this. pic.twitter.com/o4MUvjl5dh

And now the next opponent awaits. The Penguins still boast a roster with Sidney Crosby and Evgeni Malkin, the latter of which out with a lower-body injury sustained on Tuesday versus the Bruins. He’ll get a crack at a more offensive role perhaps, but it doesn’t mean he won’t be sent over the boards to create some space with the Devils’ young star–and show another team the annoyance they’ve been missing from their lives.