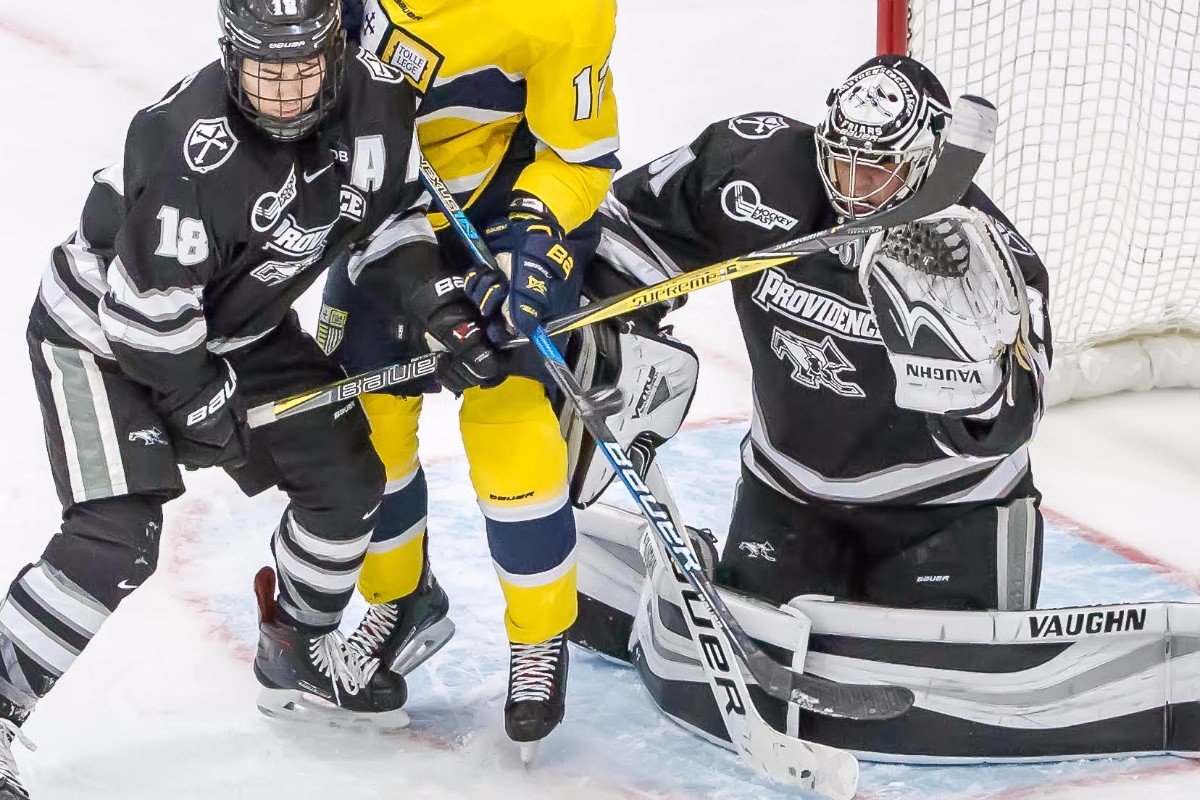 Hanover, NH — Providence Colleg, and Brown University are separated by only 2.7 miles across Rhode Island’s Capital. On Saturday, the teams traveled across two states’ borders 180 miles north to Thompson Arena, in picturesque Hanover, for the opening game of the 30th annual Ledyard Bank Classic. The Ocean State squads played their 100th game and offered a wicked goalie performance, a fun comeback, and officiating questions.

Providence opened the game shelling Brown goalie Luke Kania, landing the first nine shots of the period. Brown did not get their first shot until seconds before getting the game’s first goal. Tommy Marchin whipped a shot on Hayden Hawkey. The Montreal draft pick saved it, but the rebound bounced to Joachim Weberg. The sophomore from Oslo, Norway, drew Hawkey above the crease, deked around him, and scored on the second Bears shot of the period. The Friars poured on more shots in the frame but failed to crack Kania before the intermission.

The second period was more of the same. Providence outshot Brown 11-2, albeit many of the attempts were long ranged and not in tight. Still, Brown’s sophomore goalie from Chicago was equal to the task. He stopped everything hurled at him to keep Brown ahead 1-0 going into the second intermission.

Providence finally potted one early in the third, partly because of a curious call. Josh Wilkins finished off a flurry of shots with a goal 4:42 into the frame. However, the officials blew a whistle before the puck crossed the goal line, yet they still counted the play as a good goal. The Brown bench was frustrated with the call but played on.

Near the middle point of the frame, Scott Conway potted one in tight to claim a Friars lead. Brown got a few chances late in the frame but were turned away by Hayden Hawkey and buried by Kasper Bjorkqvist’s empty-netter. The Junior from Espoo, Finland, was particularly happy with the goal because a review negated a goal for the Friar Captain. PC runs their winning streak over brown to three consecutive with the 3-1 final.

Brown Head Coach Brandon Whittet was disappointed with the close of the game.

“We defended well,” Whittet said. “They’re a relentless team and I thought we just got worn down. I thought their energy level remained consistent, I thought ours dipped as the game went on. No excuse can be attributed to the break we were just on, we just need to find a way to make sure we play a full 60.”

Starting defenseman Tony Stillwell also left the game early in the 2nd with an undisclosed injury. Brown falls to 2-7-3 with the narrow loss. Luke Kania finished with 41 saves on 43 shots faced, tying a career high from last February against Harvard. They’ll close the weekend with a consolation game against Army, West Point. Puck drops against the Black Knights at 4 pm at Thompson Arena.

Providence Head Coach Nate Leaman was pleased with his team’s adjustment and effort.

“I thought we did a better job in the third of winning the net fronts,” Leaman said. “We were pretty urgent, pretty desperate in the third. And that’s when I think we played our best.”

Friars take this one by a final of 3-1 and with that, congrats to @CoachLeaman on earning his 300th career win! #GoFriars pic.twitter.com/W0mirIY9JH

The Friars improve to 10-4-3. And Nate Leaman wins his 300th game as a collegiate coach. PC will close the weekend going for a trophy against the hosting Dartmouth College Big Green. Puck drops at Thompson Arena at 7 pm.