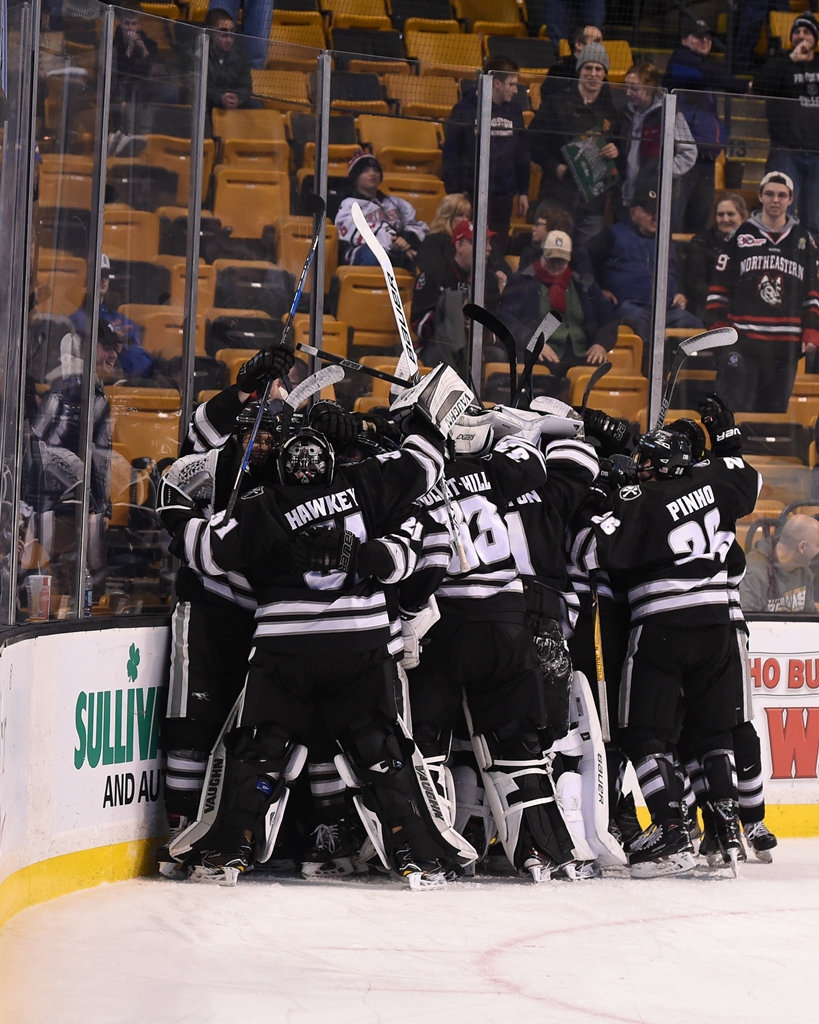 Providence, RI — Providence College rode a roller coaster through Regular Season play. The Friars entered with National Championship aspirations but scuffled at a few points in the season. Namely, they lost three of four games in January. Two of those losses came to the Boston College Eagles. On Thursday night, hot Friars squad welcomed the Eagles to Schneider Arena to close the Regular Season and secure the second seed in the Hockey East Tournament

The opening period featured chances both ways. BC rang the pipes twice while Joseph Woll stonewalled the Friars. PC had the shots advantage 14-9, but neither team cracked the scoreboard.

The second was like the first. The Jesuits and Dominicans traded strong checks and quality looks, but neither cracked the other’s armor.

Providence broke the ice early in the third. Freshman Tyce Thompson, from Milford, CT, ripped a wrister inside the left post for his seventh goal of the season. A few minutes later, Luke McInnis took a holding minor and PC capitalized. Josh Wilkins blasted a shot from the right circle 3:33 into the third for a 2-0 lead. Providence capped their scoring push after the frame’s halfway point. Jack Dugan swooped behind the net and fed Captain Kasper Bjorkqvist in the slot for a one-timer and a 3-0 lead.

Jerry York’s squad regrouped and attacked Hayden Hawkey. The senior from Parker, CO, was mostly perfect. Only a JD Dudek point-blank look after a funky bounce off the end boards got through. BC pulled Joseph Woll for the final 2:35, but couldn’t cut the lead closer. Tempers boiled over after a wildly physical game and a fight broke out at the final buzzer as Providence walked away with a 3-1 win and the 2nd seed in the Hockey East Tournament.

BC drops to 11-20-3 and 10-11-3 in conference. They end the regular season with seven losses in their final eight games. Seven of those games came against ranked opponents and all but one were decided by two goals or fewer.

Jerry York was down on his team’s offensive output while focused on the challenge ahead.

“It was a real tight game,” York said. “It’s pretty similar to how we’ve been playing. We’re very competitive, we stay right in the match with anyone. We need a break. We need to score goals. Scoring goals has been a tough assignment for us all year. We had some good quality chances. We’ve gotta get some red lights.” On the potential playoff matchup next weekend with either the Minutemen or the Friars: “Pick your poison. Two very good teams. Two teams, we’ve played extremely close.”

The Eagles will be either the 7th or 8th seed. They face either UMass or Providence in the Hockey East Quarterfinals on the road. They’ll know following tomorrow’s Northeastern-New Hampshire game.

Providence improves to 21-9-6 and 14-7-3. The Friars close the season with six wins in their final eight games.

Nate Leaman was pleased with the result, but still focused on things to improve ahead of the postseason.

“Good win. I think that’s the story of our season,” Leaman said. “The first half, we didn’t stay with it. I thought we stayed with it tonight and had a great third period. I thought out of the gate we were a little slow. And I thought we had a lot of guys working that second and third period.”

Hayden Hawkey stopped 29 of 30 shots on the night.

Among the only dower notes, Jay O’Brien took a hit in the first period and sat for the remainder of the night after skating off awkwardly. Nate Leaman and his staff kept O’Brien on the bench for precautionary reasons.

Providence will host either New Hampshire or Boston College next weekend at Schneider Arena for the Hockey East Quarterfinals.