Providence, RI —  The Ocean State’s capital houses its only two Division I Men’s Hockey teams. The Brown Bears and Providence Friars have combined for seven Frozen Four appearances and a hearty share of memorable showdowns. They played on Tuesday night at Meehan Auditorium for the 33rd edition of their annual Mayor’s Cup competition and 101st edition of Providence’s cross-town rivalry. The game had the potential for a tight affair, considering Brown’s three-game winning streak and the recent matchup between these teams at the Ledyard Classic. Instead, the stage served as a demonstration of Providence’s dominant ability.

The opening period was a complete disaster for the hosting Bears. PC drew a Tommy Marchin tripping minor only 2:40 into proceedings and Kasper Bjorkqvist potted the game’s first goal 28 seconds later. Less than a minute after, Greg Rptntz found empty space in the slot and ripped a shot for another Friar goal. Before the frame was halfway done, Josh Wilkins found space and sent Luke Kania to the bench with the third PC goal on only 4 shots thrown on junior net-minder Luke Kania.

Gavin Nieto replaced him and did not fare much better. Forty seconds after entering, Jack Dugan controlled a horrible turnover and deked out the recently entered native of Yorba Linda, CA, and staked the Friars to a 4-0 lead only nine minutes into the game. Brown only got two shots on Hawkey in the frame.

The dominance continued in the second as Scott Conway extended the lead to 5-0 2:18 in with Brown’s defense in a scramble. The Bears mostly matched the Friars on the shot counter for the frame, only down 12-11, but could not crack Hayden Hawkey.

The third changed from scoring dominance to venting frustration. The shots ended at only 5-2 in Brown’s favor. Late in the frame, tempers flamed when Brandon Duhaime decked Max Gottlieb from behind. Brent Beaudoin retaliated and joined Duhaime in the box for cross-checking and a ten-minute misconduct. Brown got one goal back when Tristan Crozier scored his fourth of the season while skating, four-on-four. The late effort was not enough and Providence claimed a 5-1 victory and their 20th Mayor’s Cup over their cross-town rivals. 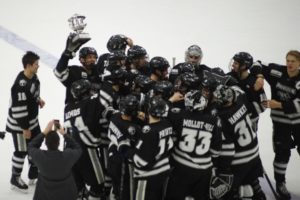 Brown drops to 5-8-3 and snaps a three-game losing streak. The Bears resume ECAC play with a two-game homestand against St. Lawrence and Clarkson. Puck drops at 7 pm on Friday night and Saturday night at Meehan Auditorium.

Nate Leaman spoke well of his team’s work after a poor weekend.

“We played a much more complete game,” Leaman said. “We played much more of our style. I thought we worked a heck of a lot harder than we did on Saturday night. And it’s our 3rd game in five nights. I thought we did a pretty good job of staying with it throughout the game.”

Leaman gave all three goaltenders time in net. Hawkey played 51:15 of the game and stopped all 15 shots he faced. Gabe Mollott-Hill got 7:04 of ice time and faced three shots, allowing Brown’s only goal. Jimmy Scannell closed the final 1:41 with two saves and no goals allowed.

Providence improves to 13-6-4. The Friars travel to Conte Forum on Saturday night to face the Boston College Eagles. They’ll then close January with a home-and-home against the Northeastern Huskies. Puck drops for all three games at 7 pm, on January 19th, 25th, and 26th at Conte Forum, Schneider Arena, and Matthews Arena respectively.