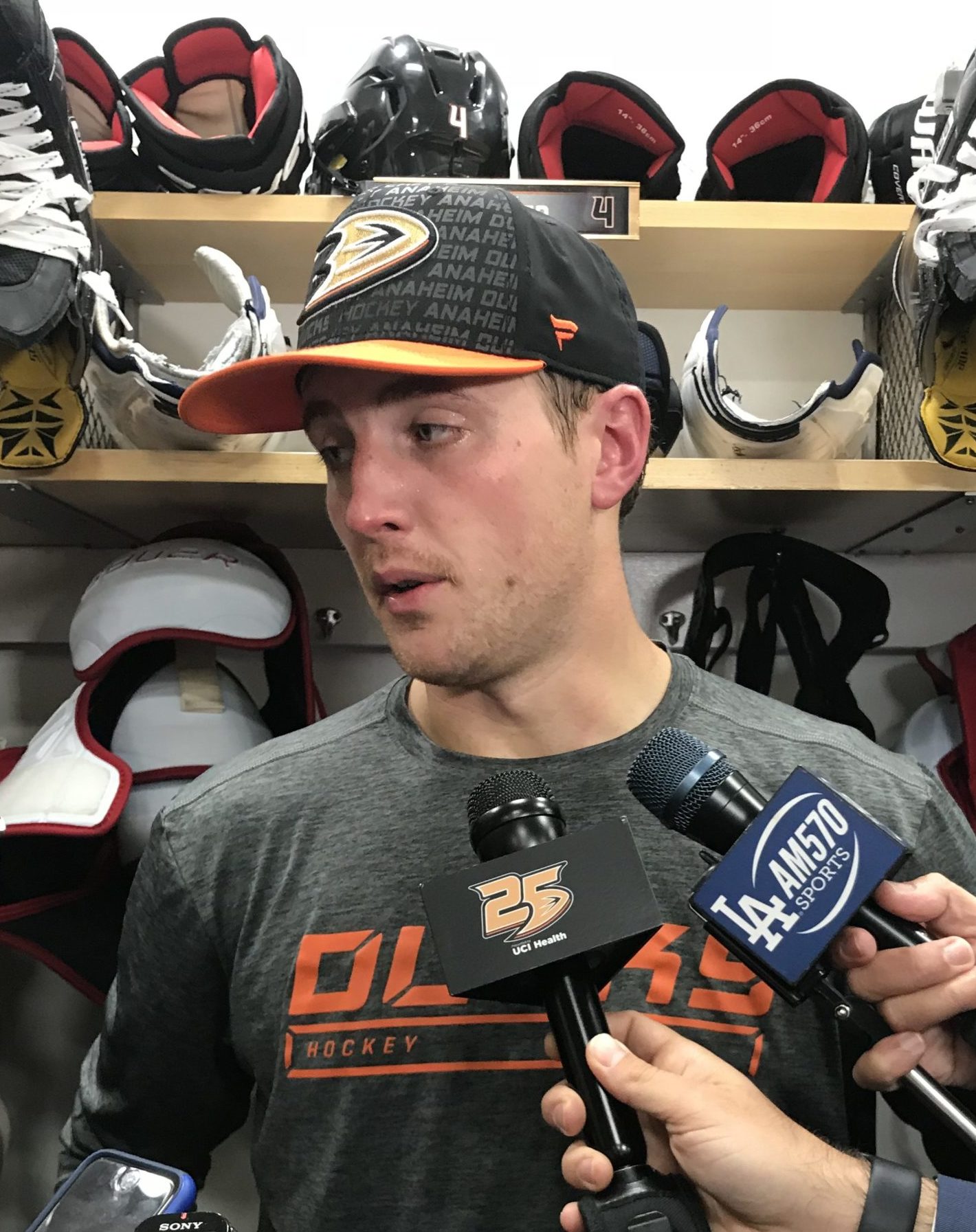 Self-effacing as always, here’s what Cam Fowler of the Ducks said after his hat trick goal, the last one in OT, which snapped a seven-game winless streak for Anaheim: “[After the goal] I couldn’t see anything. I was getting bombarded. I was getting punched in the face. It was a good feeling. It was something I’ll remember for a long time, but I don’t want it to be about me. I think more ah, more about the team and the step that we’re taking now. It was a big win for our team and to get off that losing streak.”

He’s never scored more than two goals in an NHL game before. He knows that sometimes players keep the hats that shower down for three goals. He doesn’t think he’ll do that. Well, “Maybe I’ll keep a couple and put them with the stick. Otherwise, I don’t see much use out of them,” he says.

In fact, only seven defensemen have scored a hat trick which includes an OT winner. Oddly enough, the last three, including this one, have been by Ducks defensemen. And the one before that was by Sheldon Souray, then of Montreal but late of the Ducks.

The very first time this happened was by Georges Mantha, then of the Montreal team, against the New York Americans, in 1937. The NHL used to play regular season OT then. It was discontinued in the WW2 era, and brought back approximately thirty years ago. (I might have a new book on such facts in the works. Keep watching for more news on that.)

Another little oddity: those three times that Ducks d-men have recorded hat tricks are the only three three-goal games by defensemen in team history.

Say it this way: when an Anaheim defenseman is in the mood for scoring three goals, he’s going to do it in spectacular fashion or not at all.

This one was rendered more thrilling by the last-minute heroics of Columbus to tie the contest at twos.

Fowler is not on the Ducks ice, or in the Ducks room, for his boisterous leadership. His command of the team, now absent of senior members and especially on this night with Ryan Getzlaf out of the lineup, is instead calmly confident. His example is what he offers. Along, of course, with excellent play on every shift.

This was needed to get the team out of its seven-game losing slump (two points were gained in OT in that span).

On this evening, he tied the score at 1-1 after the Ducks had surrendered the first goal of the game early in period two. This despite holding the Blue Jackets to three shots in period one, something they have not done well at this year. The first goal of the night came when Columbus poked one home at 3:33 of period two. The building with more than 16,700 in it literally grew silent, stunned that they might be witnessing a loss, with this being only the fifth Columbus shot on goal of the night. Teams have been averaging 37+ against the Ducks, including more than half of the last 15 games seeing the opponent putting on 36 or more.

Fowler responded at 9:09, from Rakell, the pass coming to him to poke up over the goalie. He put the team ahead at 18:36 of that period, from Lundestrom. This one was a long, rising wrist shot.

The scoring so far was all in P2, and the Ducks exited that frame up 2-1. The Jackets pulled their goalie with about a minute to go as period three waned, and the team scored (DuBois) with 32 seconds to play.  They had almost evened the shots by this point, erasing their poor start.

Fowler and his partners turned the play around from the Ducks end to the Columbus one with about half a minute gone in OT. Adam Henrique fed the puck to Fowler across the slot to the right side. He put it home.

Henrique had been looking for the pass: “I felt as if I had more and more ice as I kept going, and I just was trying to make a move to the inside, and Cam just put himself in a great spot there for me, for the goal.”

He said of the win, “We built off last game in the way were were playing. We did a good job regrouping and finding a way to win in overtime.” He acknowledged that, “Night in and night out, Fowler is a leader in this dressing room and out on the ice.”

Fowler commented on how the team felt after they allowed Columbus to tie the game late. “[The feel] was pretty positive. It was pretty upbeat. We’ve been through a lot and we didn’t panic. It would have been easy to kind of get a little bit down after you give up a late goal like that, but luckily we found a way to regroup and get a big two points.”

Thanks to Josh Brewster for having me as his guest on Duck Calls. For the hockey-hungry in SoCal, the show is a godsend, and I don’t mean when I’m on there–all the time. Listen to archived episodes at www.hockeytalkradio.com.

The Ducks coach had only a vague idea early in the day that Getzlaf might be unavailable. The decision was made basically at gametime. It’s upper body. No further word.

The Ducks now travel up the highway to play the Kings and their new, interim coaching staff. Fowler said it best, “You always expect a spirited game when you go into Staples Center.”