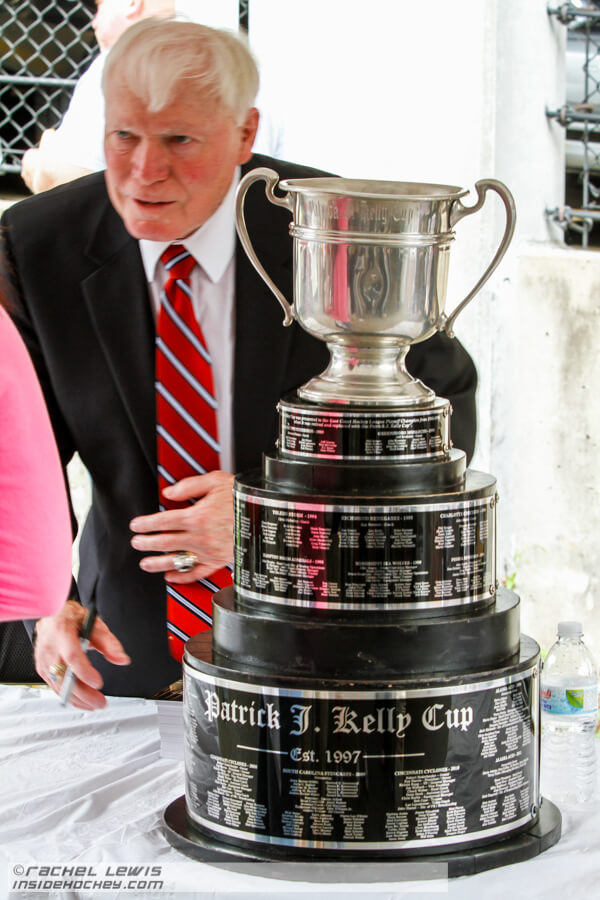 The proverbial “Drive for Five” straight championships has begun for the Allen Americans.

The ECHL standout franchise has primed the pump in hopes of adding a third straight Kelly Cup title to their previous two as well as the pair of consecutive President’s Cup championships they earned in the now-defunct Central Hockey League.

General Manager/Coach Steve Martinson, whose club began the season on an uncharacteristic stumble that saw their won-lost record stalled at 4-7, 5-9 and 8-11, captured their fifth straight win (all on the road), 5-3 at Indianapolis on Sunday, March 12. With just 11 regular season games remaining, they continue to fine-tune their skating, passing, shooting and goaltending.

Two proven forwards – Greger Hanson (Binghamton) and Bryan Moore (Manitoba) – are back from their respective American Hockey League call-ups. In addition, Martinson trimmed the roster prior to the ECHL trading deadline on Thursday, March 9 by dealing forward Kale Kerbashian to Wheeling and defenseman Randy Cure to Wichita, both for future considerations.

Martinson realizes that his job isn’t to make everyone happy but to win, and that’s exactly what he’s doing to prepare his team for the regular season stretch run and what promises to be a rugged post-season.

Under Martinson’s astute leadership, Allen has captured the now defunct Central Hockey League’s President Cup title in 2013 and 2014, followed by the ECHL’s Kelly Cup post-season championship in 2015 and 2016.

Recently, the team has gone an impressive 9-1-1 in its last 11 games and 14-2-2 since losing two straight to Wichita in mid-January.

Allen ranks third in the ECHL’s Western Conference with 83 points, four behind Colorado (87) and six behind West-leading Toledo (89). Nipping at their skates are Fort Wayne (79) and Dallas Stars affiliate Idaho (75).

The squad continues to be buoyed by the unparalleled scoring achievements of two-time defending league scoring champ Chad Costello, who has a league-leading 106 points and a league-best 75 assists to go with the squad’s second-leading goal total at 31. The second line is anchored by Moore (43 points), who is in his first year with the Amerks.

“I think we are as deep as we have ever been,” said Costello, the team’s co-captain who has led Allen to their two ECHL Kelly Cup titles following regular season of 125 and 103 points, respectively. “We need to make sure we are playing our best hockey to finish the season and enter the Kelly Cup Playoffs with momentum.”

Martinson has strengthened Costello’s supporting cast with the recent signing of Wade Macleod to form an explosive first line that also includes Josh Brittain (18 points in 24 games). The team’s scoring depth includes the league’s fourth-leading point producer in Hanson (70 points and the team’s leading goal scorer with 32) and Spencer Asuchak, who is ranked among the ECHL’s top 20 scorers with 61 points.

Other consistent contributors include defensemen David Makowski (47 points) and Eric Roy (35 points), and forwards Gary Steffes (34 points), Dyson Stephenson (24 points), Tanner Eberle (23), and Zach Hall (21 points). Defensively, Mike Gunn (+15) and Travis Brown +12) have helped pick up the slack for the injured Aaron Gens, who was a major part of the team’s last two championships in the ECHL.

In goal, veteran Riley Gill is the league’s best puck stopper with 2.12 goals against average and .938 save percentage. Gill has shut the door frequently enough to earn six shutouts and a 25-7-1 mark, and has three ECHL Kelly Cups to his credit – one at Reading and the last two for Allen.

“(Since I’ve rejoined the team), our team is deeper throughout the lineup,” said Makowski, who last year contributed 38 regular season points and 20 more during the playoffs, then returned to the Americans one-third of the way into the 2016-17 regular season after starting the year in Austria. “We have four lines that can play in all situations and can score. Hopefully, we can stay healthy and finish the regular season strong as we have already begun preparing for the playoffs.”

Allen is off until this weekend when they host Wichita Friday and Saturday nights at Allen the Event Center.