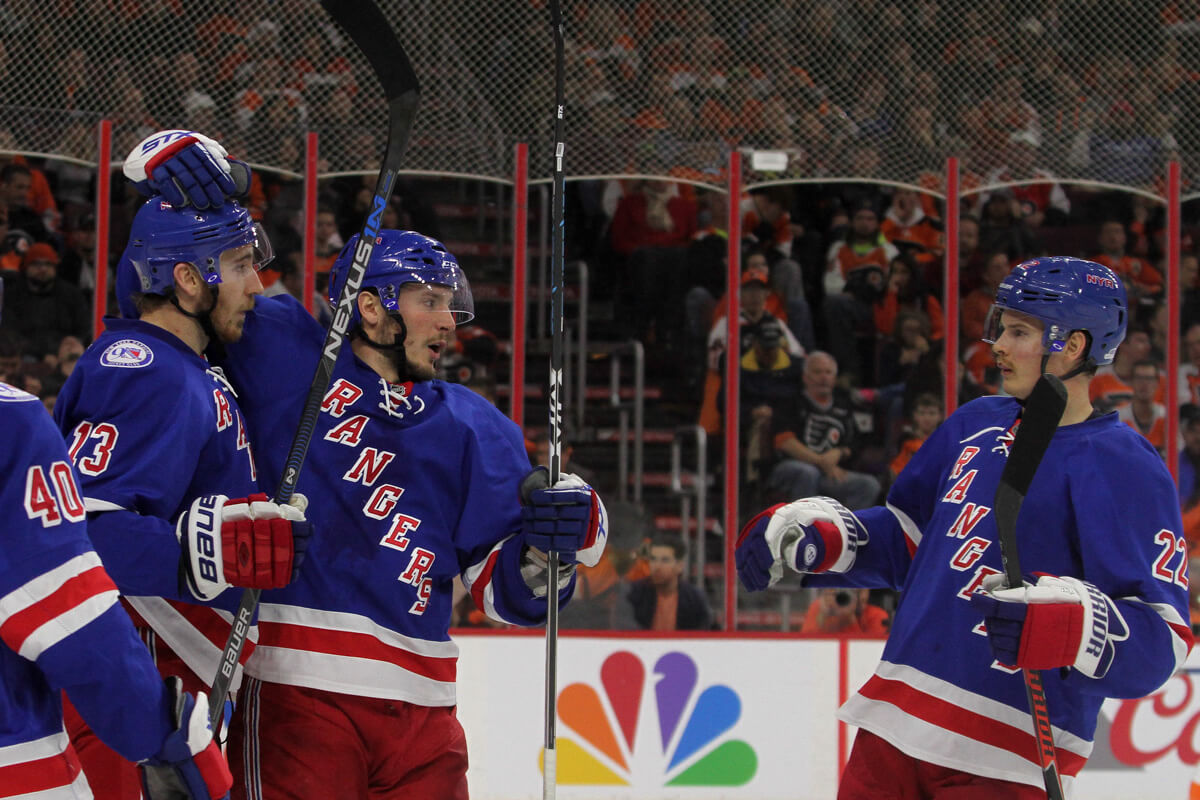 NEW YORK – May the 4th line be with you. There is your Star Wars plug. Indeed it was the New York Rangers fourth line that contributed in a big way as they rolled past the Ottawa Senators to tie the series at two games a piece. The atmosphere of Madison Square Garden was electric as legend John Amirante was on hand to sing the National Anthems. It wasn’t the same start as it was in game three but the Rangers got it going and never looked back.

Kevin Hayes, who, has had a rough playoffs showed signs of improvement in game 3 but certainly looked a little better in game 4 and contributed on the opening goal as he fed Nick Holden cutting to the net and put the puck past Craig Anderson. It has been the second period that has been the Rangers productive period as they continue to rack up goals within the middle period. Through 10 playoff games in 2017, the Rangers have outscored their opponents, 14-4, in the second period. Tanner Glass was inserted into the line up for game 3 to bring some energy and physical play but he also has had the ability to create chances. He did so in game 3 and picked up two assists in tonight’s game as well. He was given the game’s second star for his effort.

Oscar Lindberg contributed with two goals tonight as he has now scored in two straight games. It was his line along with Glass and J.T. Miller that were the fourth line that did the job in helping secure the victory. Again, we see the resiliency in the Rangers team to comeback in the series after being down two games to nothing. The Rangers have won eight of the last 11 playoff games they have played when trailing in a series, dating back to Game 5 of the Second Round against Washington in 2015.

Head coach Alain Vigneault talked about the way his team played in yet another solid sixty minute effort and tying the series, “What we’ve done is won another game here and won at home which we had to do.  We’re making a couple plays with the puck that we need to make and we’ve been able to capitalize on a couple of chances.” He also discussed the effort from all four lines for the second straight game by saying, “I’ve said this many times this year we have to have four lines that can play.  Definitely tonight Oscar’s line came up big for us with a couple of big plays.  If you expect to win you’re going to need contributions from your whole team and we definitely got that tonight.”

Glass talked about how his contributions have been effective for his team by saying, “Look at these assists. They are not exactly play-making assists. They are just kind of the gritty, grinding game I bring. Sometimes it ends up in the back of the net.” Glass also went on to talk about how contributing now despite not being here for much of the year and spending much of it in the AHL, “It’s huge. It’s been a trying year to say the least, but I kept faith in myself and my family has been huge for me. It’s a good support system down there. I believed I could play at this level and it’s nice for me to be here right now.”

Michael Grabner tallied an assist and posted a plus-two rating. Grabner extended his point streak to three games (two goals, one assist), and he is tied for third on the Rangers in points in the 2017 Playoffs (five). He has registered 10 points (five goals, five assists) in his last 16 playoff contests. Plenty of Rangers are contributing and they must continue to do so and remember that this is now a tied series with still plenty of work to do.

New York has won four of five games at MSG during the 2017 Playoffs, including each of the last four playoff contests at home. The Blueshirts have outscored their opponents, 13-4, over the last four games at MSG. The Rangers have earned at least two home wins in nine of 15 playoff series since the start of the 2012 Playoffs, including each of their first two playoff series in 2017, and the Blueshirts won all of the previous eight playoff series in which they earned at least two home wins over the span.