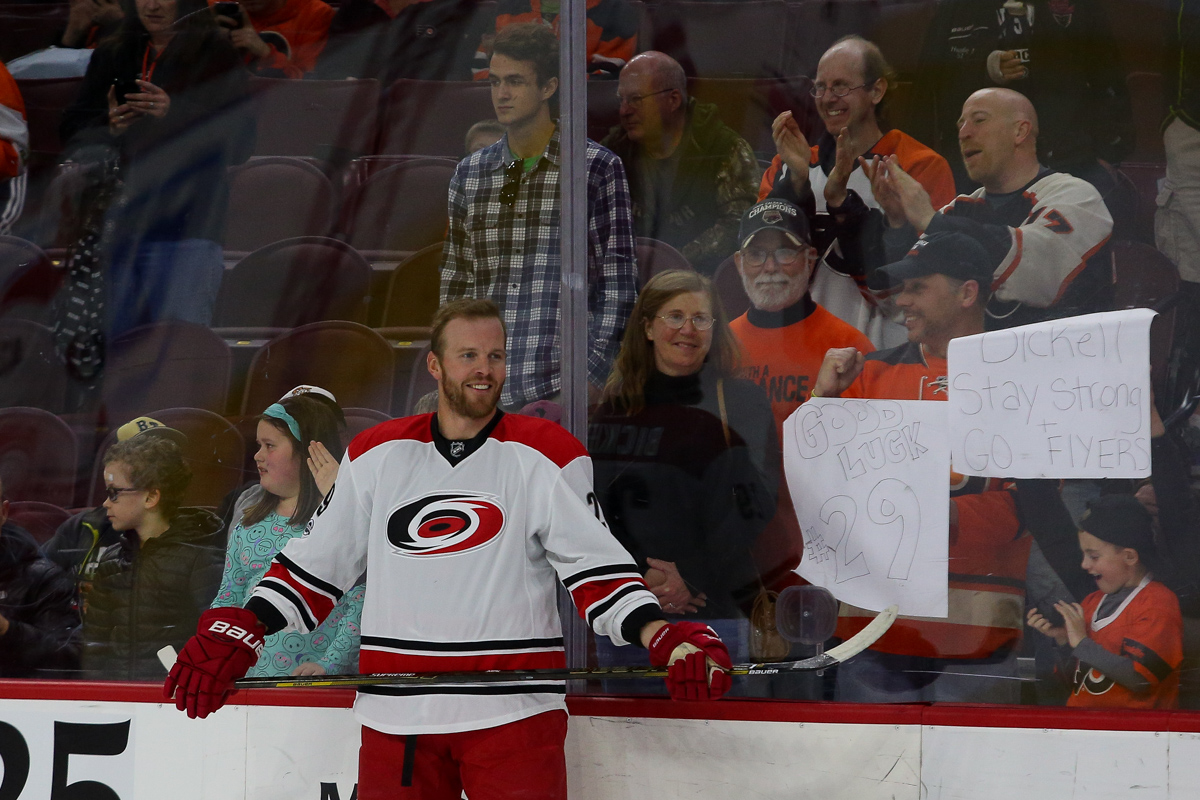 With his hockey career over, Bryan Bickell’s mission is far from done.

The former skater with the Chicago Blackhawks and Carolina Hurricanes is spreading his story and looking to inspire others diagnosed with Multiple Sclerosis. Bickell was diagnosed with the disease during the 2016 NHL season when he was a member of the Hurricanes.

The 2013 Stanley Cup winner partnered with Biogen, where he spoke at the annual National Multiple Sclerosis Society’s pre-Boston Marathon meeting on Saturday night. He’s supporting the NMSS running team members, who will partake in Monday’s marathon.

“There’s about 100 people there, and 26 run the marathon,” Bickell said. “Half of the people that are running in it have MS. I got asked to come to the dinner and then a motivational speech, just telling them my story.”

Originally drafted by the Blackhawks, the team traded Bickell to the Hurricanes during the 2016 season, when he began to struggle. He was diagnosed with MS as he started to lose control of some of some functions. The season before, he had begun to experience symptoms in the 2015 playoffs, when he fainted during a game.

Bickell played 11 games the next season with the Hurricanes, capping his career off with a shootout goal to beat the Flyers.

“That first month of being diagnosed, I didn’t know if I was ever going to play hockey again,” he said. “Or if I was ever going to hold my kids. The troubles with standing and walking, I had symptoms where I had to stop walking because I thought I was going to fall over. The highs and lows, I want to have a positive attitude. It helps a lot, things like I want to share.”

Bickell scored the game-tying goal in Game 6 of the 2013 finals against the Boston Bruins, propelling the Blackhawks to their second title in three seasons.

He had a couple of seasons left before feeling those first symptoms, against the Ducks in the 2015 Western Conference Finals. Bickell detailed losing control of his body during that series for the first time in a story in the Player’s Tribune in 2017.

In that same piece, he described not wanting to be remembered as the hockey player with MS, but as a player who worked hard and had a good hockey career.

But at the same time, he wants to use his story to motivate and spread the message of what MS is about, and supporting the runners at the Boston Marathon is part of that mission.

“Everyone here [at the Marathon MNSS dinner] have been affected, themselves or a family member,” he said. “I think telling my story is the biggest thing.”

Since retiring, Bickell moved to Ontario, where his focus has been spreading his story in hopes of raising awareness to reach a cure

“Being diagnosed with MS last November, I want to intertwine and talk to people, and learn their stories.”