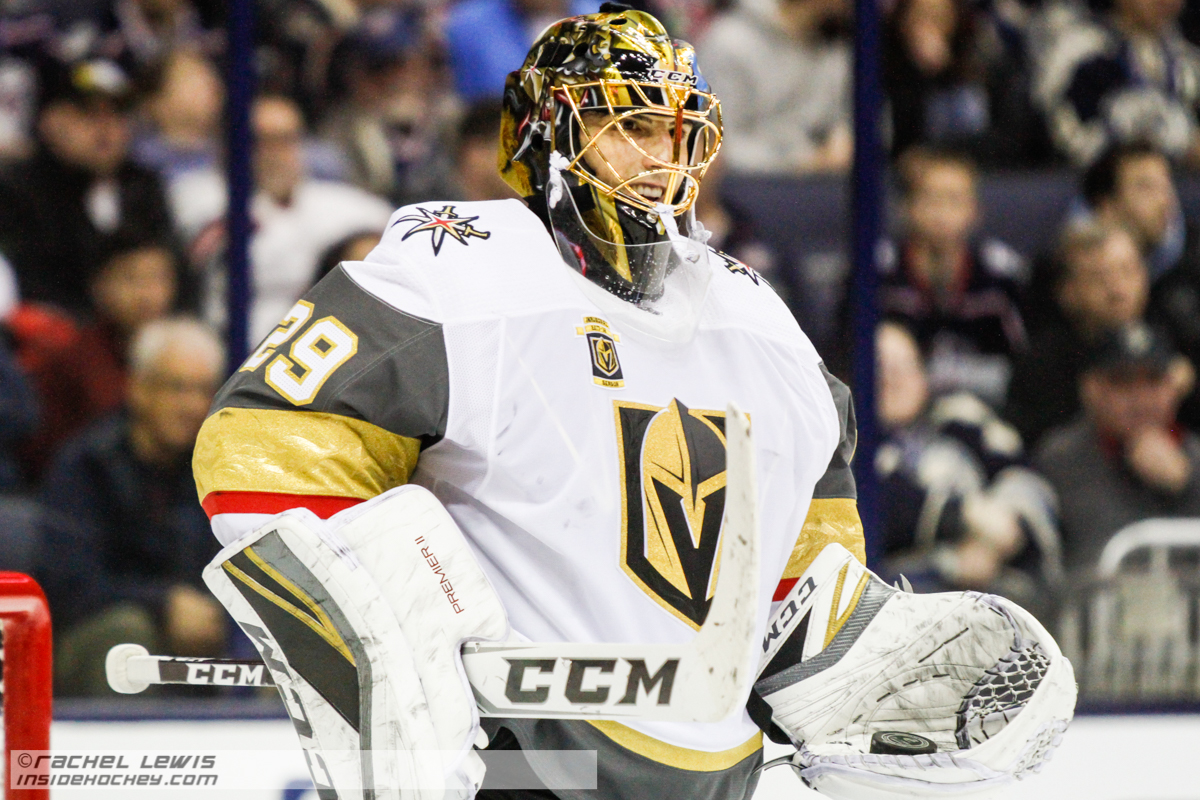 Marc-Andre Fleury (VGK - 29) laughs after making a save against the Blue Jackets.

Forgot To Tell the New Guys

Slowly, the tide in LA is turning. This is in part because the Kings have added some new players recently and forgotten to tell them to play a slow, boring, no-offense game. Whoever’s job that is: thanks for failing! Because Brendan Leipsic and Nikita Scherbak are playing offense. So is Alex Iafallo. To say that another way: some killer things are happening on left wing at Staples Center these days. (The other left winger is Kyle Clifford, and he recently scored two goals in three games, so go figure.)

These are small samples, but here’s what happened early in the game versus Vegas on Saturday in a 1pm start. Scherbak was making his season’s debut after coming over from Montreal, and he took only eight minutes to score his first goal of the season and first as a King.

The play came because he made such a quick transition to offense. The puck went into the Kings zone. Scherbak, cruising in the neutral zone, saw this, and before it got to the LA player (Muzzin) was already whirled around and headed in a circular pattern through the neutral zone. Muzzin spotted this and zipped him the puck. Scherbak went in to the right side, used the defense as a screen, and put it past Fleury.

After, he said, “That probably is one of those moments that is going to stick to my memory for a while. . . .  All the leaders showed up with a great leadership, and it’s amazing.”

IH asked him what might be done with the puck, if the Kings saved it (which they most likely did). “Nobody really give me puck, to be honest, but if there is a puck, I will probably put it on a trophy. I will probably make something with it. But if there is not, it will stick to my memory for a long time. I’m going to remember it, yeah.”

The game featured a goalie dream matchup: five Stanley Cups between Jonathan Quick and Marc-Andre Fleury. They were both tested a lot early. Vegas has always played an up-tempo game. It’s what took them to the Final last year. But the Kings were doing it too. Twice at least in the early going, they found themselves steaking across the crease with the puck. One of those was Iafallo’s. The puck floated but didn’t go in. Hard to tell what angle it was traveling on from the distance of the press box.

Indirectly, one of these chances resulted in the first Vegas goal, because a Kings player or two was trapped down ice when the Golden Knights saw Quick give a puck away behind his net to Tomas Nosek. He got it mainly because rather than standing there waiting for the Kings D man to pick it up, he charged in and took it. He dished to Ryan Carpenter. Back to Nosek. He put it out to Lindberg, who scored his first of the year.

Now, if the Kings coaches coach that as they always do, they’ll complain about the guys who got caught up ice and didn’t get back. Not the point. The problem was Quick’s soft toss of the puck and the defenseman’s lax attitude in picking it up. And Nosek’s hustle, but generally you don’t coach the strengths of the other team.

This is not about failed offense. It’s about lazy, irresponsible defense.

Anyway, the game was 1-1 at the end of one, and one other highlight was Leipsic’s play where he sped down ice, put a puck behind the Vegas defense, and crashed the end boards, smashing the Golden Knights player into the boards in the attempt to retrieve. Hustle and grit. That’s not something many established Kings players have exhibited a lot lately.

So things are changing, and we had an amazing goalie matchup. Would it continue?

For the Kings, yes. They exited period two with a 3-1 lead, including a goal on the power play. How unlikely is that? Well, they are 30thon the power play in the NHL, at 14% and with just 12 goals for  coming into the game. By comparison, Colorado leads with 29 goals and the mid-pack NHL team, New Jersey, has 17.

The goal was an absolute chalkboard beauty. Kempe had the puck at the right boards. Behind the goal line, Leipsic tapped his stick, gently enough that Kempe would see it but not tip off the defenders. Kempe put it down, and Leipsic one-timed it to Luff in the slot so fast it was obvious he had the play in mind ahead of time.

It went to Luff, and he in turn one-timed it into the net, to Fleury’s right. Perfection. Luff’s fifth career goal.

And notice who was in on the play: young and new players, not yet corrupted by the message to be careful. (Joking, people, joking.) But it was a lovely, pure play, and nice to see this trio out for the power play. In fact, the power play was only about 40 seconds old. What that means is that Willie Desjardins is playing the youth when it matters.

With that in mind, listen to Drew Doughty: “If you can make quick puck movement, you can open up plays and open up seams. It’s a play that a lot of teams use. We’ve got to use it more.”

He also said that the young stars around the league are producing, and that the Kings need to have their young guys doing that, along with good veteran production.

Coach Desjardins echoed those thoughts, commenting, “What’s brighter is our young plays played well. That’s always a good sign. . . . It’s nice to win with some young guys. That’s something we need to see more of.”

Two more illustrations of the Kings’ newfound resolve to get the puck to the net. First one, not a goal, but worth noting. Leipsic skates almost onto a puck that has come off the side boards on a carom. It didn’t work, but the speed and effort were there.

And Carter, who produced the third LA goal: he got a pass that was on the dribble, kind of going at half speed, after Doughty dumped it into the zone. Carter skated to it and went it tight to Fleury. He could have tried a shot, or a wrap, but instead, he skated to the goal line an then dumped it into the net off the combination of Fleury and defenseman Nate Schmidt.

Along with scoring on the PP, the Kings prevented Vegas from doing the same on their two chances in the period (the second carried over to period three). This, too, is a bit of a statistical surprise given that the Kings are 29thin the league at defending the PP. They have allowed 23 goals against, coming into Saturday.

The third period saw Vegas, predictably, pouring it on. Here’s where one aspect of Kings hockey took over: Jonathan Quick was forced to make save after save. One he didn’t have to make, the crossbar did: the puck came off the boards after Alec Iafallo fell chasing it in the LA zone. William Karlsson grabbed it and put it to Reilly Smith. He put it right back, and Karlsson snapped a shot. Labeled for the top corner. It hit the post/crossbar. Another close-in chance shortly after saw Quick make a thumping pillow-pad save.

The first goal in the frame came early when Toffoli backed off the right side boards and held the puck, sliding it backhand to Forbort. He zinged a wrist shot which made it through two sets of double screens and past Fleury. The netminder didn’t even know it was coming—he didn’t flinch as it sailed past his left glove.

The Kings now head onto the road to play Detroit on Monday, the start of a four-game road trip. They will be back in LA on the 18th.

Bellemare hit Kyle Clifford in the middle of the ice, with head contact. Clifford did not return.