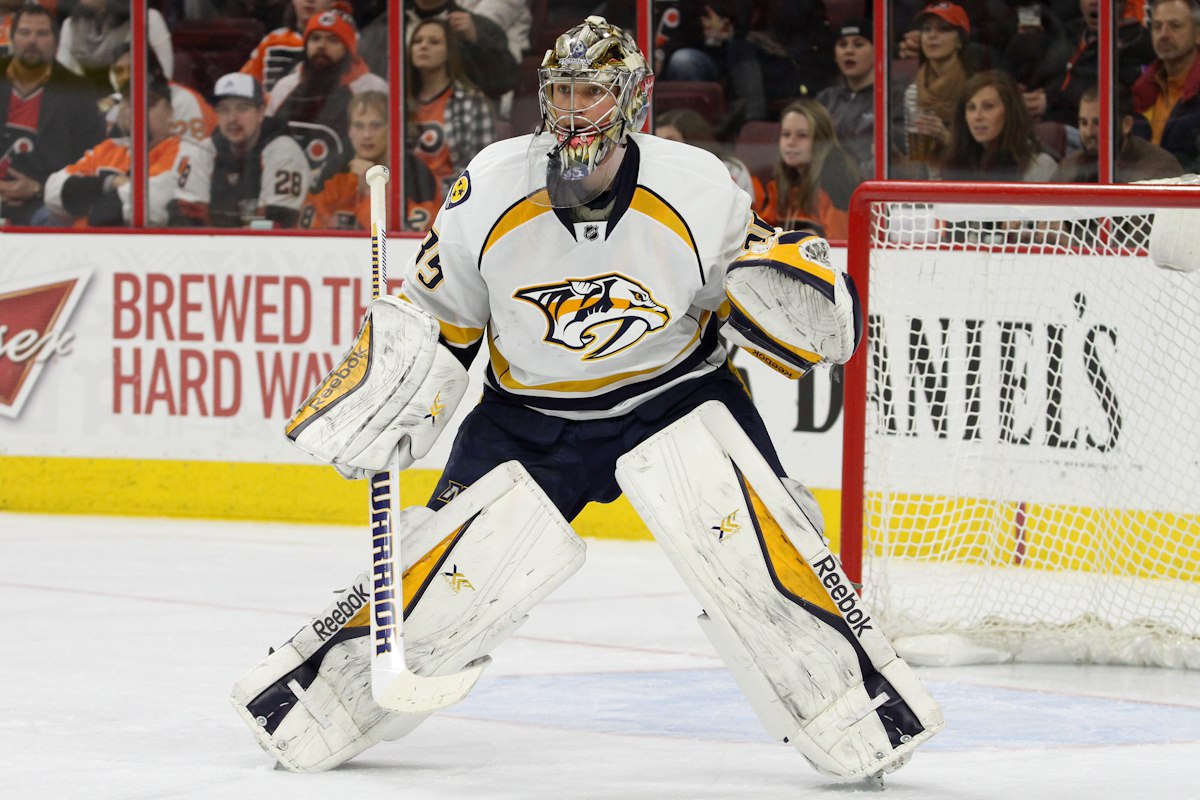 The stories going into the Nashville-Anaheim series: could the Ducks keep the two Nashville powerhouse D-men, Shea Weber and Roman Josi, off the board? Would their goalie, John Gibson, be better than Nashville’s Pekka Rinne? And would the Ducks’ league-topping PK and PP carry over from the regular season?

One question nobody asked, but perhaps those who know this team should have, was would they come out fast, or would they get behind, as they’ve been known to do? (To be fair, that’s more of a historic problem than a really recent one.)

Well, the Ducks were a sleepy bunch at 7:30 Friday evening, and Nashville took immediate advantage. They rushed from the faceoff three-on-two, and the puck went through the crease and ended up with James Neal, who slammed it in from the slot. This was partially aided by Andrew Cogliano blowing a tire on the back check and falling near the net. Hours later, Cogliano would describe his line’s start: “We let a goal in on the first shift, so it was a little bit of an uphill battle there. The first mistake is usually a goal, and that’s what happened there. We got off to a rough start, and that hasn’t happened often to us, but we got a goal back against them, and we just need to be better. . . . I don’t think our line was forechecking as well as it has in the past, and we need to get back to that, because I think it could create energy for the team.”

The Ducks would have had it back on a slapper by Josh Manson from the point, but he hit the far post. The result of all this was that with five minutes gone, the Anaheim team was down 1-0 and at a 5-0 shots disadvantage.

To characterize the Nashville style of play, the word “tidy” comes to mind. They were good on the rush, neat and disciplined on the backcheck, and mostly good in the defensive zone, if not entirely stifling. Nashville allowed them partially back in with a penalty around minute seven, on which the home team got two shots, both early. No scoring.

The Ducks took a penalty at around minute 11, but the good news was that by this point, the shot clock showed the teams knotted at fives. Nashville, however, was obviously on a “shoot from anywhere” plan, as they took them even from behind the net. They tallied four official shots on goal on the power play given by Despres.

The Ducks were down 11-6 in shots with five minutes to go in the period, and then the Predators put themselves two men down. The second call, a cross-check on Weber, was a very, super, very (again) marginal call. But whatever. The Ducks had a scary moment early when the Preds got a near breakaway down two men, but the Ducks capitalized on their PP when a wrist shot by Fowler yielded a rebound that came out right side directly to Getzlaf, who redirected it into the net.

The Preds had a scare in the last 12 seconds when a turnover to Nate Thompson let him go in and take a slapshot that caught Rinne up high. It bounced over the net

Period one saw the teams tie in shots at 12 each. The Ducks had awakened from their early slumber.

In the second, they scored right away. Cogliano went down the side with Kesler in the center. He fired a pass across and Kesler took a wrister with a couple of guys, one from each team, crossing in front. Rinne was well out of his net, and it went over his glove. Not a great goal, though the screen has to be taken into account.

The Predators got it back on an otherwise ordinary play. Two guys rushed, one being Ryan Ellis, who took a shot. In front of him, Colin Wilson reached his stick out and created a redirect that went into the net to the left of Gibson.

Not a bad goal, but like the one on Rinne by Kesler, perhaps preventable. Fans had gone crazy when Gibson was announced in the pre-game. Were they starting to rethink that devotion? Not yet, but given Boudreau’s ability to lose faith in his keepers in the playoffs, one more similar goal would start the stone rolling downhill.

After this, the momentum shifted in Nashville’s favor. They had three good shots on one shift, with Colin Wilson and James Neal, who had not started together as linemates, being the key combo. The first was Wilson to Neal. Saved. Then another chance went wide. Then the third was Wilson to Fisher. Backhand shot hit the side of the net.

The Preds ruined their own momentum when, after the play, Cody Bass dumped Garbutt of the Ducks and drew a two-minute minor. They didn’t score, and the period ended 2-2 with the shots at Ducks 20, Nashville 25. The numbers would have been different at least in terms of scoring, but that Ryan Ellis went down on his side and saved one that was being jammed in by Jamie McGinn. A scramble ensued where Rakell, standing in the crease, got leveled by a Predator from behind.

The energy in the building, which was excellent early and mostly steady as things went on, flagged a little bit as the second period wore down. The orange towels and t-shirts were everywhere, as were little flashing lights that fans had been given as they came in. It just felt different from the regular season, unlike a night before in LA, where the game was more or less like any other game all year long. But events started to overtake emotion, and the arena grew more quiet.

Before this series began, I thought that the Ducks had done well to win the division draw Nashville, and leave San Jose to the Kings. Indeed, on Thursday night, the Sharks had skated circles around a disorganized and tentative LA team. But Friday showed that the Predators, if nothing else, are not going to go gently into that good night. They’re mean, big, ready to hit, and surprisingly organized on offense.

It had seemed that the Ducks’ speed would overwhelm them, and at times, the Ducks did find themselves getting the Preds out of their game. But by and large, the teams have styles that are not so different as to lend an advantage either way. I was of the mind that if any series in the West went short, this might be the one, in favor of Anaheim. Now I’m not so sure.

Three features characterized period three: Nashville was big and heavy with their checking. The Predators scored a third goal. And Anaheim’s Gibson looked increasingly awkward and off-balance in the nets.

The goal was not really chargeable to him. It was a clear across the crease that hit a skate on its way and went in. Gibson got a toe out and stretched towards the puck but couldn’t get it. Perhaps the fact that it was traveling off-speed contributed to this. Coach Boudreau said after the game that he couldn’t blame the netminder for that goal, and that overall he’d played OK: “There’s not much he could go on the third goal. . . . He made some big saves when we needed big saves. It’s a shame that one went in the net in the third period off of one of our guys.” Nobody asked him when the hook would come.

He didn’t think his team was very good overall, though. “We didn’t play as good as we need to play if we want to be successful, there’s no doubt. We’ve got to contain some of their better players a little bit better than we did.”

Cogliano agreed: “I think, a couple of goals maybe were bad breaks, but I think it was that we just weren’t playing that well. It was a matter of we were giving them too many opportunities in terms of easy breakdowns. We’ve got to manage the puck a lot better. They’re good at capitalizing on mistakes, on transitions, so we’ve got to be better.”

The Nashville forecheck was a topic of conversation from all sides. Getzlaf said “At points during the game I thought we held onto it a bit too long and allowed their forecheck to come to us. We need to move the puck quicker. We were taking those hits that we don’t need to.” One instance to illustrate: He was forced back all the way to his own net by the pressure with two minutes to go.

The Ducks pulled Gibson with 1:51 left, and they tried to get the puck to the front, but mostly were held to the outside. The most dangerous chance was once when the puck came across from the left of the zone low to the front of the net. Kesler couldn’t get any kind of stick on it as it went past him.

The end of the game saw several players engaged in roughhousing, including Getzlaf and Mattias Ekholm with Chris Neal mixed in. Getzlaf wouldn’t comment later on what was said. Oddly enough, no penalties were issued. Not that they would have done anything, but symbolic meaning is important in these series, where anger can drag out and fester.

The teams haven’t played since November, and Nashville won the season series 2-1.

The Ducks lost defenseman Manson to an upper body injury which will be reevaluated in the morning. He ended with 4:44 of ice time.

I’d love to hear from you @growinguphockey on twitter. Please let me know you’re reading.