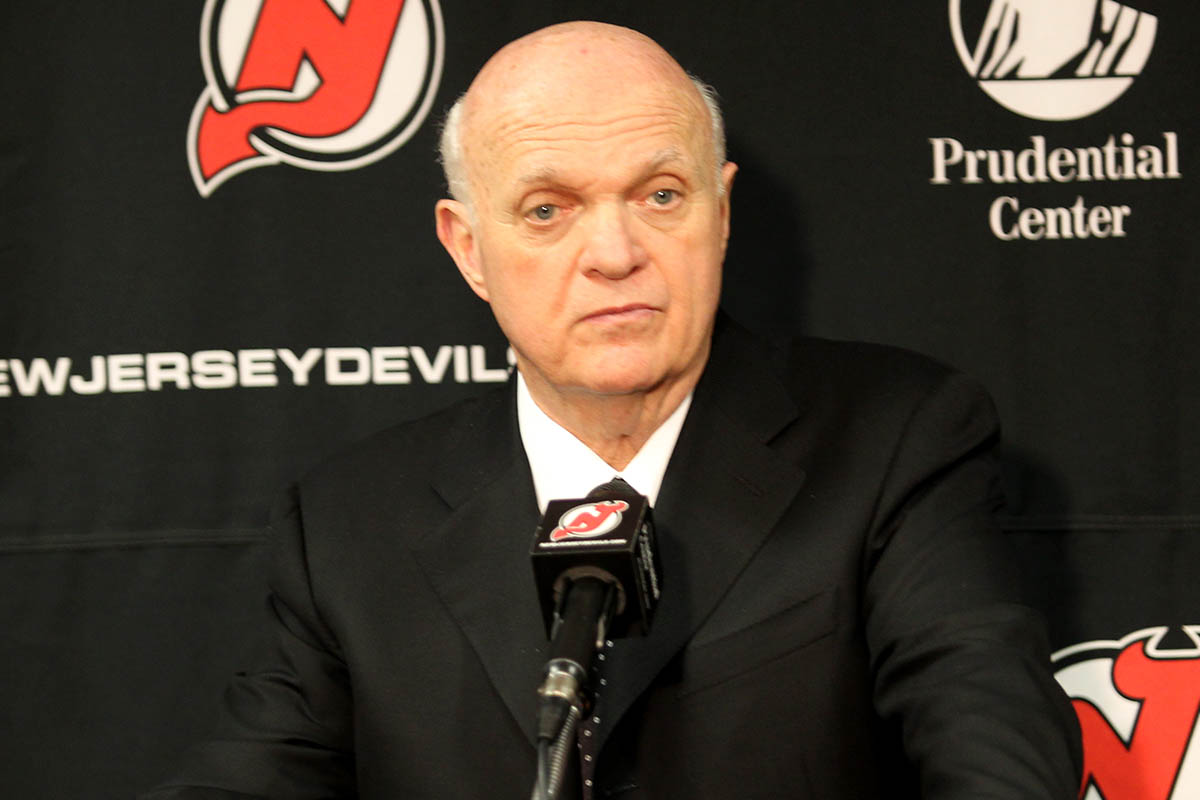 The Devils’ second shakeup commenced a few hours before they faced the Philadelphia Flyers on Thursday. It was no surprise that with the return of Jacques Lemaire as coach of the Devils, the team would soon see the departure of their captain.

On Thursday, the media discovered that Jamie Langenbrunner’s stall had been cleared out. He wasn’t even at the arena. Langenbrunner reported to a member of the media that he had been asked to waive his no-trade clause. Ends up, Devils GM Lou Lamoriello asked him to waive it 8-10 days ago, just a week following the firing of John MacLean and the re-hiring of Lemaire.

Last season, Langenbrunner and Lemaire had a falling out. He wasn’t happy with the way the players were being treated and was very vocal about it. One thing led to another, until that one fateful night where he was scratched from the Carolina game…and it all went downhill from there. That was the last straw that broke the camel’s back.

The Devils bowed out of the playoffs in the first round. Langenbrunner confessed to being driven to act out against their coach. Lemaire retired from hockey.

That was before the summer of Kovalchuk. The way the universe works, those bad things leftover from the previous season would carry over into the new season. Even with a new coach on hand, the Devils just couldn’t cut a break once this season. It was as if all of their luck had completely run dry.

For the players, they didn’t want MacLean to go. They blamed themselves, not their coach, for what was happening on the ice. The talks of their captain being traded left one player scowling at that kind of talk. It was evident that the players did not want their captain to go either.

But they played without him on Thursday night against the Flyers, unaware that their captain was on the trade block. They just assumed he was a scratch for the night and nothing more was amiss.

Lemaire was told prior to the game that Langenbrunner would not be playing, so he decided to put Dainius Zubrus in, who was originally going to be a healthy scratch after suffering a lower body injury. Ends up, Zubrus would score the first goal at 11:37 in the first period.

With the assist on the goal, Patrik Elias moved ahead of MacLean as the team’s all-time leading scorer against the Philadelphia Flyers with 65 points (27g, 38a).

In the middle stanza, Scott Hartnell caught Johan Hedberg right outside of the net at 15:46, and quickly put one in before the goalie could make it back in front. Prior to the Flyers goal, Hedberg had been making stellar saves the first 35 minutes in the game. But a goal that caught Hedberg outside of his net (for the second game in a row), can get under a goalie’s skin and predict the remaining outcome of the game.

David Clarkson came into the Flyers’ zone on a breakaway attempt. He tossed the puck in, it came right back out and he skated to the side with his hands up in the air insisting he just scored a goal. The buzzer never sounded. At 17:40, the play stoppage allowed a review of the play, which confirmed what Clarkson already knew…he had scored a goal, putting the Devils ahead, 2-1.

“It hasn’t gone in in a while,” Clarkson said of his first goal in 18 games. “To be honest with you, I wasn’t for sure the way it’s been going for me.

“I heard a weird sound so I knew it wasn’t the post. I figured if I put my hands up, maybe they’d call it in anyway. It’s been a while, so I wasn’t for sure about that one.”

Hartnell followed closely behind with another goal at 18:54 to tie up the game.

Ville Leino assisted on three of the four Flyers goals, marking this as his first career three point game.

With all of the Devils issues this season, they have yet to perform a full 60-minute game. Did they perhaps taper off somewhere in the second period?

“It’s a tough question,” Clarkson said. “I know in the first we played well. The second, we came out…but we still came down there with opportunities. I don’t know what to say. Some of these are bad bounces going off guys’ skates or hitting the boards and going in, it’s tough to explain right now.”

The Leader And Friend

For the players, finding out that they would lose their captain to a trade brought more shock in the locker room than belief.

“I don’t know what was going on or what not,” Clarkson said of the trade. “I consider him a close friend/best buddy. I moved near him. I’ve lived beside him for two years of my career. He’s somebody I look up to in the locker room. He’s probably the best captain I’ve ever had in the National Hockey League. He’s a player’s guy. We definitely miss him tonight.

“He’s a heart and soul guy, so whatever happens to him, he’ll be fine. That’s the type of person he is. I guess I look up to him, so I’m going to miss him.”

With Langenbrunner being the captain of the Devils for the past four and a half seasons, he brings many memorable moments to his teammates.

“How he always stuck up for the players,” Clarkson said of his memorable moments of Langenbrunner. “I remember being a young kid and being young in this league with Claude Julien. He would come over to me after a game. He was always there to say ‘good job’ or to help me with a play that I thought I needed to do.

“He was always somebody that was very positive, even up till this year. Me and him are really close. I moved to [his neighborhood] to live beside him. That was part of the reason I moved down there. Him and Colin [White] are two guys that I’m close with, so it’s hard.  It’s hard to see it happen. I’ve learned a lot from him.  I’ve learned how to be a bit of a leader myself from him. He’s a player’s guy. If there’s an issue with the player or he needs to speak to the coach, he’s the first guy to go in there and say his opinion and say what needs to happen.

“It will definitely be sad…I’ll miss him for sure.”

“He’s given me quite a bit of advice,” he said of the lessons he’s learned from the captain. “When a game’s not going well [or] I feel like fighting, or I’m chasing guys around, he’ll come up to me and be like, ‘Clarky, just relax out there.’

“With little pucks to the board…I used to go to the boards, for instance, I liked to use my skate to kick it to my stick, and Jamie pulled me to the side one practice and taught me, ‘Clarky, just go in with your stick like this, you’ll see what’s going on and make an easy play.’

From his website: www.jl15.com, Langenbrunner posted this message to his fans:

I would first like to thank all my fans who have supported me through my time here in New Jersey. This organization’s success over the past ten years would be envied by most in the NHL community and all the fans played an important role in that success. Thank you for making New Jersey both a wonderful place to play and a wonderful place for my family to call home. I look forward to hearing from you all in the future.

I also would like to personally thank Lou Lamoriello, Mr. Vanderbeek, and every member of the Devils organization from the front office to all my teammates over the years to my friends in the training and equipment staff for running an organization built on loyalty, trust and hard work. These are qualities that I have always admired and have helped define who I am today.

Finally, I would like to thank my fans in Dallas for all the support and kind messages. Since, being traded from Dallas I have been amazed at the overwhelming support and messages I still receive to this day. I am very excited to find my role with the team and help us get to where we all want and expect to be.