NEWARK–If the NHL is a league of streaks, then it should come as no surprise that the Devils, who enjoyed a five-game win streak last month, are seeing things from the other side. They’ve been downed in six-straight contests, their longest skid of the year. And while they have been outshooting opponents most nights, opponents are finding the net versus them more regularly. New Jersey has allowed four or more goals in five of six games. They’ve dropped to third in the Metropolitan division and are just a point in front of the wild card Penguins.

“It’s a very difficult league to win in,” said head coach John Hynes following his team’s sixth loss in a row and third-straight game in which they allowed four or more goals. “There’s no easy games. Your focus level night in and night out has to be there, and not only night in and night out, but it has to be there for the full 60 minutes. We’ve lost a few games and lots of times there’s been key mistakes in games at key times that cost us.”

Things in the division only figure to get even tighter and that’s why the Devils know they have to reverse course in short order. If the club is looking for some inspiration in doing so they might not have to look far. The Flyers handed New Jersey a sixth-straight defeat on Saturday 5-3, a game that saw the Devils surrender two leads and allow four-straight Philadelphia goals in less than 20 minutes of play. 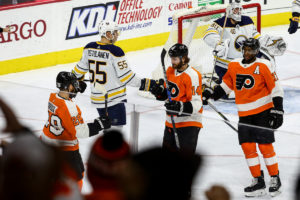 If there’s one thing the Flyers know, it’s streaks. The good, bad and ugly. Last season they won 10-straight from Nov. 29 to Dec. 14 but struggled to keep pace the rest of the year and missed the playoffs. Earlier this season, they lost 10-straight from Nov. 11 to Dec. 2 and won just eight of their first 25 games. Since then they’ve combatted the early woes with success, winning 11 of their last 16 games and picking up points in 13 of 17. Now two points out of the wild card, Philly is back in the thick of things.

“When you look at the Metro right now, it’s so stacked up you can’t afford to lose a game,” said Jakub Voracek, who leads the league in assists (45) and added two helpers on Saturday. “To be honest, during that 10-game streak, I would say there were four or five games we should have won. I remember last year we won 10 in a row. We didn’t deserve to win 10 in a row. This year we didn’t deserve to lose 10. It’s kind of confidence. When you’re losing, you’re scared to make a play and scared to hold onto a lead, it was showing. But we’ve dug ourselves out of the hole and I think it shows a lot of character from our team.”

New Jersey can relate. Their loss to the last place-Sabres, which started off the chain of unfortunate events, came in a contest in which they outplayed Buffalo but failed to hang onto the lead. Taylor Hall thought he had the go-ahead goal before a coach’s challenge reversed it. The only goal surrendered was one by the Devils in overtime. Defeats in Dallas and to the Islanders saw the team control play and outshoot opponents but leaving without two points. That’s something that’ll have to change. Especially against their own division, which represents 19 of New Jersey’s 42 second half foes. The Flyers share that sentiment.

“These are the games you need to win if you want to make the playoffs,” said Sean Couturier following a two-goal performance on Saturday in Newark. “Sometimes, with a young team, you got to learn how to lose sometimes and learn from your mistakes to move forward and start winning.”

The Devils hope they’ve learned from their mistakes, and with each of their next three games versus its division (including at Philadelphia on Jan. 20), the cost of not could be a crucial blow to the club’s playoff hopes.