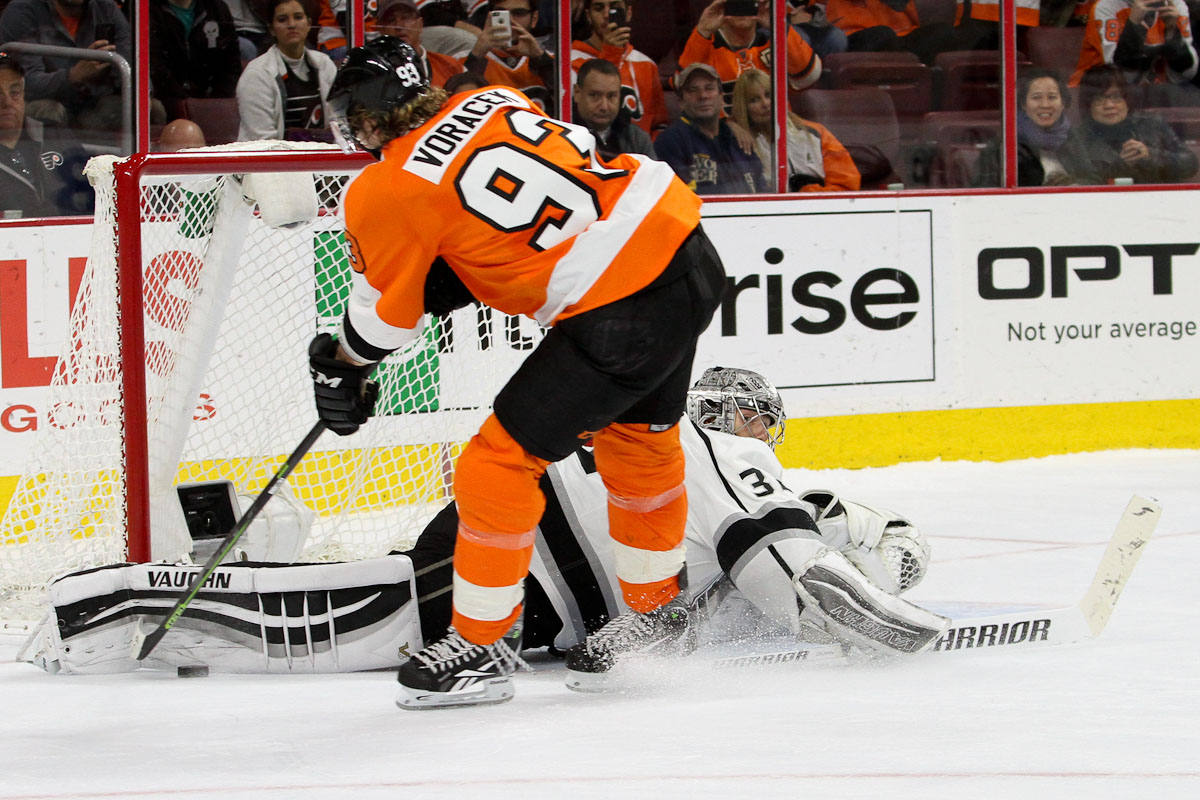 Trying to build off of its inspiring overtime victory against the Carolina Hurricanes this past Saturday, the Flyers were one minute away from capturing two huge wins in a row and bolstering its first two game winning streak since October 24th. Tonight, the Flyers played one of its best games of the season. Unfortunately, that effort had to come in a loss via a shootout to the Los Angeles Kings.

On an emotional night in which longtime Flyer and fan favorite Simon Gagne was honored in his retirement ceremony, the crowd erupted throughout the game each time Gagne was shown on the big screen. This seemingly gave an extra boost to the Flyers as it went toe to toe with the 1st place team in the Pacific division for every minute.

The Flyers opened the scoring early in the first period when rookie Shayne Gostisbehere, or “The Ghost” as they call him, recorded his first career goal by ripping a slap shot passed Kings goalie Jonathan Quick. Gostisbehere was called up from the minor league affiliate Adirondack Phantoms on Saturday to substitute for the injured Mark Streit. Ghost’s offense has been the talk of the Phantom’s organization for quite some time and he could be sticking around the big club much longer than he initially anticipated.

When asked after the game how he felt after recording his first career goal on a Stanley Cup winning goaltender, Ghost’s response was not suprising:

“It’s a dream come true,” Ghost said. “Every kid who has ever played hockey wants to play in the NHL let alone score a goal. I mean it’s really a dream come true. I really didn’t know what to do out there. I was just very happy.”

“Yeah, you know there is a lot of good in his game tonight,” Hakstol said. “Obviously he had an impact for us offensively, played very confidently. You know we just need to continue building all the areas of his game.”

After a Jamie McBain Kings goal tied the game up at 1s after the first period, the Flyers looked to have taken the lead in the second period after Flyers Brayden Schenn appeared to have scored via an accidental skate redirection. The game was delayed for several minutes while the ruling was being determined by head officials in Toronto. The call was overturned as “intentional kicking” and the game remained tied at 1s after the second period.

When asked after the game about the goal being overturned, Schenn had this to say:

“To be honest I didn’t kick it, or I didn’t mean to kick it,” Schenn said. “Apparently it was offside as well, and they were going to challenge. That’s what we were told. It was no goal on two occasions. It is what it is, and hopefully it’s something to build off of. We’ll get ready for the next game.”

Flyers captain Claude Giroux scored what looked to be the game winning goal midway through the third period. After numerous great saves by Flyers goalie Steve Mason and multiple failures to clear the puck late in the third period, the Kings were able to capitalize on its 6-on-5 man advantage via the pulled goalie and Milan Lucic tied the game at 2s with 56 seconds remaining in regulation.

During another extremely exciting 3-on-3 overtime, which included a failed breakaway by Giroux, the game was forced to go to a shootout.

Voracek, who assisted in the Giroux goal, took a puck to the face in the third period and left the game momentarily to get stitched up. Although his lip had been split open like Ronda Rousey’s, Voracek insisted he was fine.

Mason spoke after the game about the completeness of his team’s play even in a tough loss:

“I think both teams played a solid hockey game,” Mason said. “They are a big team and I think our guys went toe to toe with them. I think each team had their chances. Unfortunately, we gave up the late goal and couldn’t get the extra point.”

Although gaining 1 point in tonight’s shootout loss isn’t the worst thing, the Flyers need to start reeling off some 2 point wins in regulation to climb the latter in the Metropolitan division. The team currently sits in 6th place in the division with a 6-8-4 record through 18 games.