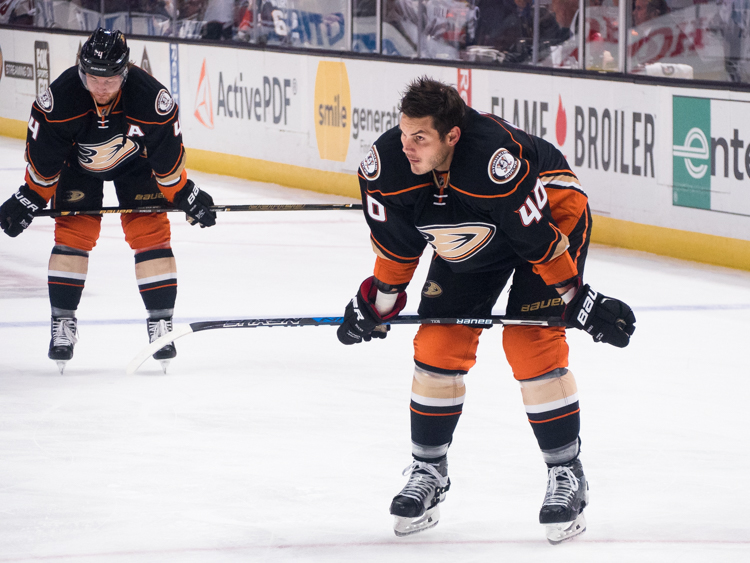 With Calgary in town Sunday evening, the Ducks had two injured players back, two-thirds of their first line: Nick Ritchie and Ryan Getzlaf. They started the game with Corey Perry as their right-winger, and things were going well. The team got its first goal when the line crashed the Calgary end. The puck came to the net with Ritchie in front, deflected off a Calgary player, and was taken by Clayton Stoner pinching in low. He put it into the side of the net.

But shortly after, watching the lines, it was apparent that Carlyle was mixing. Perry played with Vermette and Cramarossa. Then it was Getzlaf, Perry, and Cogliano. That last didn’t work out too well—it cost the Ducks a goal when the puck came from Monahan to Gaudreau and looked like it was put in by him. It hit Chiasson’s arm on the way in as he was being cross-checked, so he got the tally.

Aside from that, the first period featured a Calgary power play that had three Ducks’ shorthanded chances—not just shots, but chances to come close to the net and shoot—a fight for no good reason between Engelland and Boll, and what looked like a fight between Backlund and Vermette that got them only minors. Drag, because that might have looked good on the resume, especially of the Swede.

So the first frame ended 1-1. and Calgary might have been thinking about the end of the streak. No, not the Cubs’ lack of winning. That’s been over for—what?—days that only seem like months now. Rather, Calgary’s losing streak in Anaheim, which stretched to 23 regular-season games coming into the night. The Ducks last lost to the Flames in Cali in 2004. It was so long ago that it’s now Coach Carlyle’s second go-round with the team. To put it another way, he’s never lost to Calgary in Anaheim.

Commenting on the streak, he said, “For us, we want to ride the wave, and for them, they’d like it to crash,” after the game. He also said that someone had said he was in Anaheim in 2004 and had taken the last loss to Calgary, but “I corrected them this morning;” this with the Carlyle twinkle.

Jonathan Bernier in the Ducks’ net was surely hoping that would continue, as his personal games won-lost streak sits nearly at 50/50 (88-89-23) and he surely wanted to get it to at least even. He would do that.

He had more shots on him than did Chad Johnson in the other net, 22-16 through two periods and 26-21 in three. He wasn’t tested much. Johnson was, and through two was down 3-1. The Flames had come out fast in that period; the pace picked up. The second goal and first of the frame came when Getzlaf shot, Perry took the rebound and tried to wheel with it, lost it, and then Kesler came in and potted the goal.

The second was much later, a two-on-one where Cogliano shot, then shot off his own rebound as he fell. This off a turnover that allowed him to come down the ice with Silfverberg. This period would end, after some further intrigue, at 3-1.

Shortly after the goal, Cramarossa fought Matthew Tkachuk after the latter hit Rakell. It was the second time on the night that Cramarossa tried to stand up for a teammate. If this isn’t a “I wanna stay” move, then show me one.

Bad idea, as he got mixed up with Backlund at the Calgary bench and took a minor. Fortunately, so did the Flames’ player. The ensuing four-on-four yielded nothing for either side. But the end of the period saw a bit of a phantom trip on Cogliano by Kulak, and that put the Ducks on the PP again.

The Ducks scored once more in the third period, another power play goal. Kesler got this one, with the assists to Perry and Getzlaf. Significant? No, except that this was Getzlaf’s 531st NHL assist, and thus his 531st Ducks assist, to tie him with Selanne for the club all-time lead.

After the game, he was joking about this, “He’s aware,” he said of Selanne. “He texted me last week about it.” But he had previously said, “It’s big. Yeah. Obviously, I want to be where I am. It’s a big honor for me to have spent as much of my career here as I have. Those things I think are a natural progression, and I hope they continue. Being up there with T is a big honor for me.”

About the streak of wins, now stretching to an NHL record, he said, “Any streak is pretty amazing in this league . . . . We always want to make this building a hard building to play in. It doesn’t matter who’s coming in.”

Calgary’s Mark Giordano after the game said, “We gave them a few goals we shouldn’t have. Obviously, mistakes are going to happen, and it’s a good hockey team there. In the third period, we didn’t generate much because they didn’t play with any risk at all.” He said that they need to score more goals. “I thought tonight was better as far as generating. I thought last game [against LA] was a brutal game all around, but no, I mean . . . it’s tough to win many games when you’re not putting more than one in the net.” His answer, “Put pucks to the net and bury them.” The Flames need “Ugly ones,” he said.

The Ducks now leave for a three-game road trip. No big deal, except that it’s to the Eastern time zone, and they play three games in four nights. The first is in Columbus, and it’s not until Wednesday, but the team is traveling Monday and practicing on Tuesday to get ready for the Blue Jackets.

Carlyle hopes that that game provides some payback for the 4-0 beating they put on his team at Honda Center last week. “We owe them. They come in here and they really spanked us. They dominated the game, so we’re going to have to make sure that we get ourselves ready.” He then detailed the plans for flying early as noted above. “Back-to-backs are always tough,” he said, “Here we go. Life on the road in the NHL.”

The youngest and greatest Ducks fan, Jolene Gagne, was in attendance with her dad Christian. This is significant because Jolene’s grandfather is Serge Gagne, the NHL Official Scorer in Anaheim. Nothing like starting them early! Jolene had her Ducks sweater on, and she was grasping a tiny Zamboni and a mini Kesler figurine. She’s not yet three.

Scratched on the night for Anaheim were Scarbossa and Kase. The latter just made his NHL debut last week.