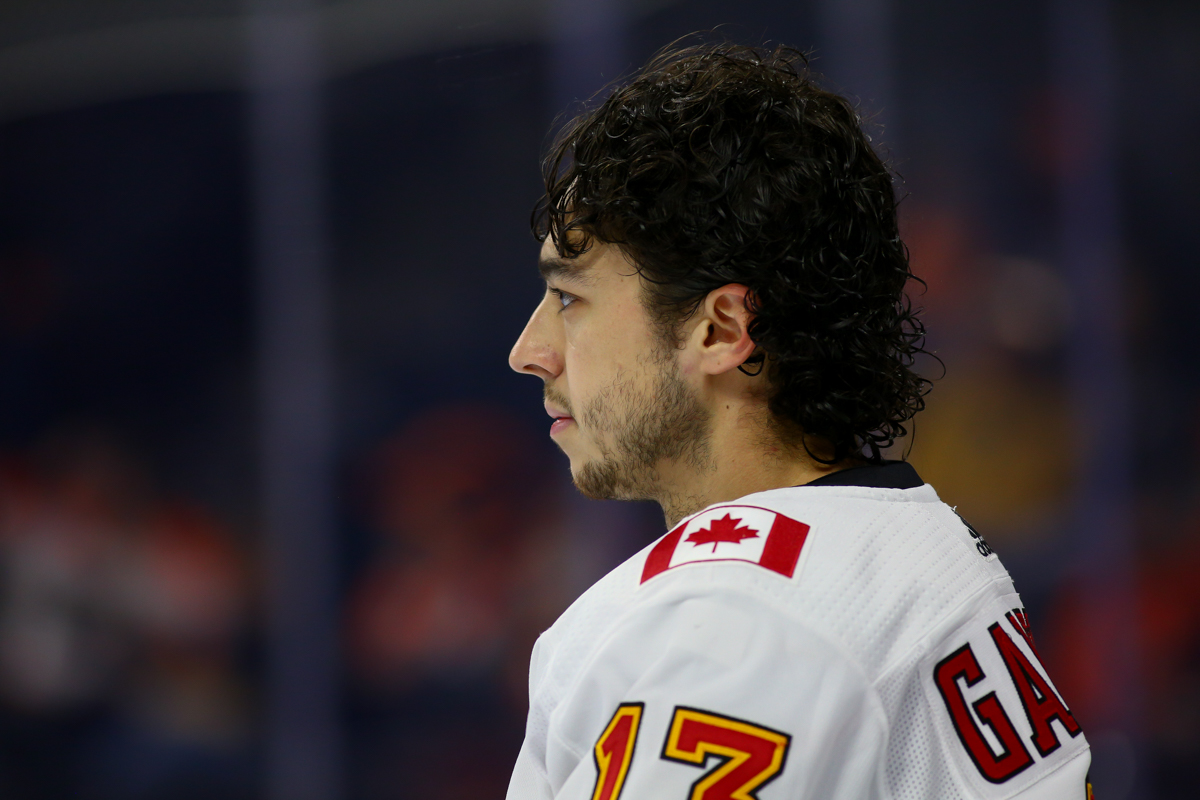 Johnny Gaudreau #13 of the Calgary Flames

After rattling off seven straight wins, the Flames have come back down to earth after losing their last two games at home. They’ve been outscored 8-1 in those two games, but the lopsided scores are not an accurate reflection of the hockey being played by a newly-invigorated Flames team. Three of those eight were empty netters and the Flames have a handful of opportunities that haven’t gone their way.

Still, the Flames are disappointed after losing two games in which they opened with strong first periods only to lapse through the second and third. Tuesday night’s loss to the Pittsburgh Penguins was all the more demoralizing given that Pittsburgh’s top forwards Sidney Crosby and Patric Hornqvist were both out with injuries. Crosby is still recovering from a recent surgery to repair a sports hernia and Hornqvist is out with a knee injury.

Coming off injury for the Flames was Sam Bennett who rejoined the fourth line after missing the last month with an upper body injury. His return forced centre Mark Jankowski from the lineup while at the same time keeping the recently healed Austin Czarnik on the outside looking in. In his 9-minutes of icetime Bennett was quiet and despite a reliable defensive game, the Flames fourth line failed to get anything going in the offensive zone.

The lone Flames goal came off the efforts of Johnny Gaudreau on the defensive end before the Flames rushed up the ice and Tobias Rieder found Gaudreau for a tap in goal at the other end. That was about all the Flames top line winger managed to generate offensively on Tuesday night, but he made good on his one opportunity–a welcome trend after a slow month of November.

The Flames had their opportunities to draw even throughout the third period, as Giordano noted after the game.

“We just couldn’t find the tying goal. It’s a tight league, when you only score one you’re not going to win. The league’s that close. We have to find a way to get an ugly one there.”

New coach Geoff Ward has been consistent with his message about the Flames finding success, commenting again about the importance of sticking to the process and simply managing the game better.

“It’s about game management. Right now there’s a lot of positives that we can take out of the game but the biggest thing for us is when we get into situations where it’s crunch time, we have to stay composed and we have to manage the game better.”

The result was a disappointing one for backup goalie Cam Talbot, who was looking for his third straight win. The onus can’t be placed on him–he put forth an effort worthy of a win–but could he go back, he’d undoubtedly like to have the Penguins second goal back. Coming out from the corner after a turnover behind the net, the Penguins Bryan Rust found the gap between Talbot’s arm and body. It was a strong performance for the Flames number two, finishing the night with 32 saves on 34 shots.

Ward was happy with Talbot’s play and commented on it after the game. “ He played well. He made big stops when he had to. I look at it as us needing to provide more run support for him. I don’t think you can fault our goaltender on what happened tonight.”

The most notable difference between the first period and the rest of the game was Calgary’s sudden inability to break pucks out of the zone and control the pace of play through the neutral zone. The first period saw the Flames defence active in pushing the play out of their zone, but the rest of the night was a different story. The Penguins stepped up their pressure in the neutral zone and the Flames failed to adapt, failing to find passing lanes that were there in the first.

Their trouble in the neutral zone setup for sloppy zone entries and disorganized play in the offensive zone for most of the third. There were chances, but sustained pressure failed to materialize and eventually the Penguins would add two empty netters on plays that the Flames simply lacked urgency on. It was not the typical third period push that Flames fans have come to expect.

Ward was not overly impressed with the empty-net effort, stating “Look at the empty net goal. We get the puck and we’re waiting for guys to swing back with speed and they’re all standing at the blue line.”

The Flames finish their four-game homestand Thursday night against Montreal, who have been a strong road team this season having picked up 19 of a possible 30 points on the road. Flames fans will hope for a more consistent effort through 60 minutes, and I would expect Austin Czarnik to come in for Sam Bennett against a fast Montreal team.

Flames captain Mark Giordano addresses the media after the loss.