Coming off a disappointing homecoming on Saturday night, the Calgary Flames were looking to rebound against a struggling Anaheim Ducks team. Led my third line winger Andrew Mangiapane, who recorded his first career hat trick and added an assist to the cause, the Flames got the result they were after.

On a night that saw two divisional rivals win, the 6-4 win was crucially important for a Flames team who simply cannot lose games to non-playoff teams the rest of the way.

It was a hesitant game for the Flames through the first two periods. Clearly this was a game that they felt they needed to win, but after their unstructured game against the Blackhawks they were reluctant to push the pace in fear of exposing themselves on the defensive side of the puck.

Despite a much better defensive effort through the first two periods, the Flames still found themselves down 3-1 early in the third period. In a way, it was exactly what the team needed. Faced with the very real proposition of losing a must-win home game, the Flames urgency led the way for the remainder of the game, scoring 5 unanswered in the remaining 15 minutes.

“We just stayed with it. We played a pretty good hockey game up till that point.” – Geoff Ward.

Flames goalie Cam Talbot was patient too, stating after the game that he thought it was just a matter of time before the Flames took over, based on the way the first two periods went. Those who weren’t on the Flames bench, however, were doubtful. A bad bounce off a skate early in the third period put the Flames down 3-1 and fans took a collective moment to hold their breath before Andrew Mangiapane responded shortly after.

Credit is due to the Flames for finding a way to come back and steal away two points on a night that easily could have put their playoff hopes in doubt. Missing two of their top four defenceman is beginning to strain the Flames limited resources on the blueline. Newcomers like Michael Stone and Alexander Yelesin are punching above their weight class in the added minutes and many are wondering how long the Flames can stay afloat without captain Mark Giordano and Travis Hamonic, the respective team leaders in shot blocks. 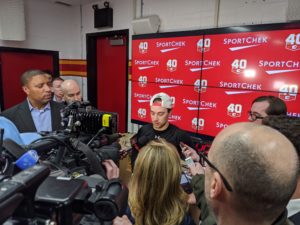 The undeniable bright spot for the Flames on Monday afternoon was Andrew Mangiapane, who’s improvement this season has been steady and consistent––something the Flames themselves have been lacking. Mangiapane is a player who knows his role exactly and goes out each and every night to prove it through hard work and simple plays. No one would call his game flashy, but at a time when the Flames need honest hardworking shifts, he is often the guy in the lineup to bring that to the table.

Coach Geoff Ward was impressed with the winger’s game.

“You feel good for a guy like that. He works extremely hard. He’s earned the respect of the veteran players and I thought he was hard on pucks. He was a major factor in our forecheck.”

Down the stretch the Flames will need to fill their individual roles if they want to see collective success. There is room for improvement at every spot in the lineup, which is both frustrating and exciting. The potential is there for the Flames to find another gear, but they will need to do so quickly if they want to play past their scheduled 82 games.