The Calgary Flames hosted the New Jersey Devils last week in a matchup that pitted two underperforming teams against one another.

Sitting last in the eastern conference, the Devils have a strong young roster firing in the wrong directions. That lack of team direction was on full display Thursday night. Despite taking an early 1-0 lead, the Devils faltered in the second period, surrendering four goals to the Flames and entering the third trailing 4-2.

The third period didn’t get much better for the Devils, with the Flames happy to sit back and let the game come to them, playing a tighter defensive game and putting one more past Mackenzie Blackwood to finish the night with a commanding 5-2 win.

The Devils have a strong combination of veteran leadership and young skill, but frustration and confusion is mounting in New Jersey after a slow start to the season. With names like Hall, Subban, Hischier, and Hughes the Devils feel like they should be icing a better product than they have this season.

Devils coach John Hynes was curt in his post-game interview when asked how the game unfolded, stating “we just got beat in every area” before moving on to say that the team needs to simplify its game to turn things around moving forward.

This hasn’t been the start to his New Jersey Devils career that P.K. Subban was hoping for with just 5 points through his opening 16 games and a -4 plus/minus rating. The chemistry in New Jersey just hasn’t clicked yet, and Thursday’s game against Calgary showed a few holes in their game, most notably their inability to apply sustained pressure in the Flames end.

“Feels like we were really disconnected and all over the ice. Tonight we didn’t play our game plan at all’, Devils winger Taylor Hall lamented after the game. Hall has 13 points through 16 games this season and has been alone driving force on the Devils.

Meanwhile, the Flames are experiencing a similar phenomenon, albeit to a lesser extent. Damage control for the Flames is due mostly to the steadfast play of their defensive core, third line, and Matthew Tkachuk and David Rittich. The first line has been a chasm of confusion for the Flames this early season. Despite putting up strong offensive numbers, the big line for the Flames has been nonexistent in the defensive zone. The Flames need a shakeup in that department.

The top line in Calgary is steady, yes, and they played a huge part in the Flames first-place finish in the west last season, but the same tune is getting old, quick. It’s a one-dimensional approach for the big three.

Monahan is a strong presence on the boards and excellent in the dot but scores the bulk of his goals shoveling them in at the front of the net. If Gaudreau and Lindholm can’t get the puck to him out front of the crease, his offensive zone presence is significantly diminished, which is nothing to say of his neutral zone and defensive zone play this season.

Lindholm brings the only zeal to the top line, with a good combination of grit and skill he’s been one of the Flames best pickups in the past few years with fellow ex-Cane Noah Hanifin, who continues to get better and better at the NHL level. Lindholm is tied with Matthew Tkachuk for the team lead in goals with 10. 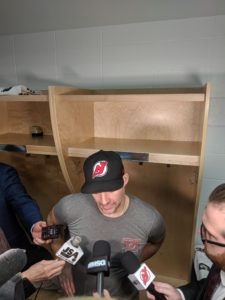 And then there’s Johnny. A fan favorite. But the schtick is getting old. Fans can’t keep watching him stickhandle in a phone booth through the neutral zone only to run out of options because he’s held on to the puck for too long. But give credit where credit is due: he is arguably the best puck handler in the league. The leash is getting shorter and shorter, however. There are a lot of players in the NHL who can score goals nowadays–it’s the players who can do a little more and provide another dimension that coaches and GMs are looking for.

The Flames took care of business against the Devils, playing a complete game and taking another step towards their prowess of last year. These are the games that fans write off, expecting a win, and credit to a Flames team who went out and executed on exactly what they needed to do.