While the Flames were battling the Pittsburgh Penguins to a 3-2 overtime loss on Monday night, a very different dilemma was unfolding off the ice for head coach Bill Peters.

Peters has been accused of directing racial slurs at former player Akim Aliu back in the 2009-10 season. Aliu’s recounting of the incident is below and comes to light via the recent firing of Toronto head coach Mike Babcock.

Peters was an assistant on Babcock’s coaching staff with the Detroit Red Wings from 2011-2014. The incident in question came before Peters and Babcock worked together and while Peters was coaching in the AHL, but opens up a much larger question about the state of culture within hockey, especially at the professional level. 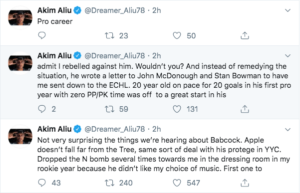 With the recent firestorm surrounding Don Cherry and his divisive comments directed at immigrants, these remarks fit an alarming and atrocious narrative surrounding the conduct of the NHL past and present. And frankly, it’s about time the hockey world joined this conversation.

Unlike the other big sports in North America, NHL dressing rooms are not racially diverse places. Come to find out, they are downright hostile towards protecting the Old Boys Club. The fact that racism finds an accepting home within NHL dressing rooms is deeply disturbing and yet sadly, not overly surprising.

Most of us like to think of hockey as an integrity-driven sport but let’s not fool ourselves into believing that there isn’t a place for racism, misogyny, and privilege to find acceptance around the rink. Any sport with predominately white athletes, coaches, and management should be held to such a standard. The simple fact is that institutional racism persists when institutions remain in the hands of those that graduate from them.

The NHL has developed several initiatives as part of their ‘Hockey is for everyone’ program, and most players, coaches, and staff are generally accepting. But these programs are all outward-facing. What has the NHL done to combat the institutional conversations that persist in hockey dressing rooms? Who, exactly, is a player supposed to contact when they hear this type of talk directed at themselves or one of their teammates?

If anything, this just makes the entire scene all the more disgusting. Players and coaches support inclusive initiatives knowing they’ve used racist comments in the past, happy to privately glide past and tell themselves that they know better now. Who, then, is accountable?

The Flames have a precedent to set in the hockey community and they need to set the right one as this story develops and the truth is revealed, but let’s be clear on this before the punishment unfolds:

If the story is indeed true, the NHL and the Calgary Flames need to make a statement and fire Bill Peters. Failing to do so would expose them as hypocrites of the utmost degree. If hockey truly is for everyone, prove it. If this kind of behaviour is outright condemned at every level but the professional one, what are we teaching our youth?