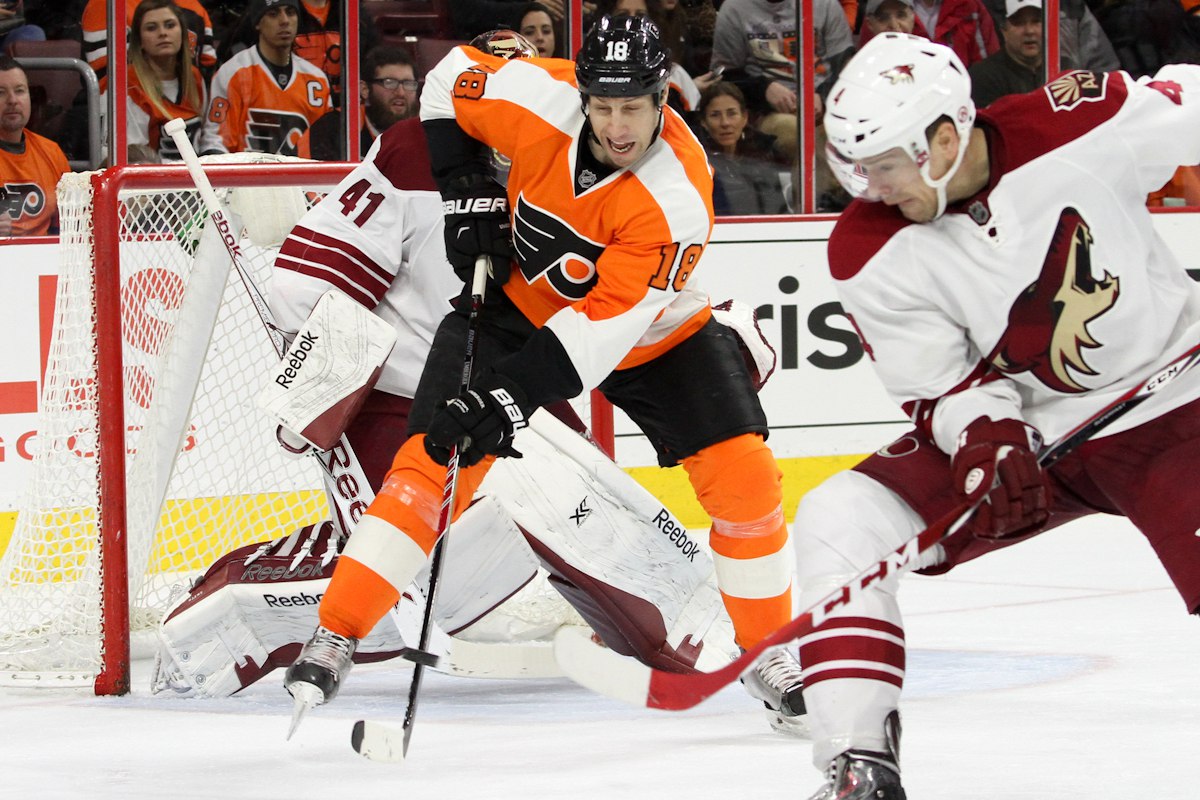 Left Wing R.J. Umberger (#18) of the Philadelphia Flyers attempts to deflect the puck

Five Things Coyotes Are Thankful For

Many of the professional sports leagues enjoy this time off to spend time with their families, share what they got under the Christmas tree, and most importantly reflect on their play during the current or previous season. The Phoenix Coyotes during this holiday season have a lot to be thankful for. Despite their slow play during their four game road trip (ending 1-1-2 and scoring and averaging around one goal in the last five games), a lot has gone right as they near the halfway mark of the season. Here are five things the Coyotes are thankful for:

Smith has been a solid reason why the Coyotes are standing where they are today. His goals against average is slightly higher than his career average this season (2.83 GAA), but with a defense that has still tried to find their way on the ice, he has found ways to keep games reachable (despite the infamous butt-goal game against Buffalo). It also helps to have someone to teach your skills to like Thomas Greiss, who has done well to fill in the shoes for Smith when he is out (4-2-0 record, 2.20 GAA).

2. Mike Ribeiro is the real deal.

The Coyotes are really not one in signing big names, but they took a chance in adding Ribeiro on the team. So far, the decision to take him has proven to work, scoring nine goals and 17 assists this season. He has been rather quiet in the stat department as of late, but his presence on the ice has become crucial for the Coyotes defensive line.

It has been nearly a month since Doan has stepped on the ice because of his “mystery illness”. After weeks of trying to diagnose his Rocky Mountain Fever, he has begun to respond to medications the doctors have prescribed. Antoinne Vermette has tried to replace his absence, but his only shining moment came on a hat trick in a loss to Ottawa. Doan will be able to take the ice Friday and skate on his own, but the timetable for his return is still questionable.

It has been the one thing the Coyotes have had on their wish list for years. George Gosbee and Anthony LeBlanc, governor and CEO of IceArziona, have done their part to put the team on the map. Sure attendance is slightly lower than last season on average, but revenue has gone up, fans are responding to special events (tailgating, promotions, etc.), and the vibe of hockey has risen. With the team statistically doing better attendance wise come January, it certainly helps rooting for a team that is currently in contention to make the playoffs.

With all the drama that fell year after year, they were just one vote away from moving to either Seattle or Quebec, and the Coyotes would have left a city with an arena that is less than 10 years old. The city of Glendale took a chance with the team and its new owners for the next five years. It is still a work in progress, but its decision has helped the city with its revenue and value. Hoping to now make a run to play in the postseason, the only direction at this point they can go is up.

Phoenix is certainly thankful that with their recent poor play, they still find themselves tied for seventh in the Western Conference. With many of the teams in the Pacific Division still showing off their strength, the Coyotes now need to prove in their next two games they can still stay afloat. They return to the ice tonight hosting San Jose, then travel to Anaheim the next day in a very crucial Pacific Division showdown.