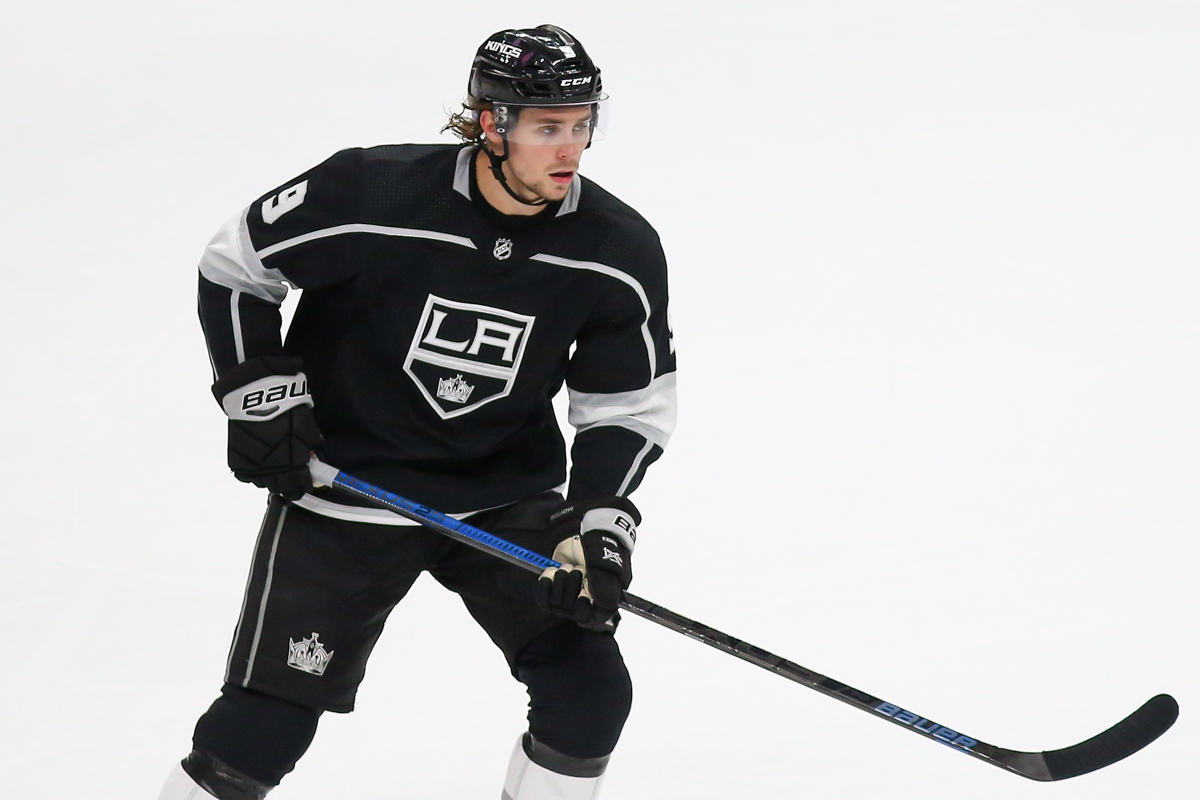 Until Wednesday night, only three players drafted in the first round in 2020, a draft held in October, had debuted in the league. Make that four following the game night as Quinton Byfield, #2 pick overall by the LA Kings, got into his first NHL game.

He started with a bang, put in to center the second line by Coach Todd McLellan. McLellan also dressed only 11 forwards for the game, ensuring that everyone would get plenty of ice time. His message to Byfield in advance of the game: “Enjoy the moment and don’t worry about making mistakes.” He also commented to say that he put Byfield on a line with Moore and Kempe because he knows that the other two will do the right thing defensively.

The Kings are taking the long view with this player. And well they should, because at 6’4” and 214 pounds but with swift and skillful skating that belie his size, he’s likely to make an impact in the team’s lineup for, oh, as long as Anze Kopitar has—fifteen years and counting.

Byfield has played thus far this year in the AHL with the Kings’ team, the Ontario Reign. He started off, literally, on the wrong side of the puck a lot of the time. That is, he was shading to offense, missing the two-way skills demanded of everyone in the NHL’s over-coached, systems-heavy approach these days. He began the season, as he said it early in the day on Wednesday, “Dash 19 or something like that. Going for the green jacket.” That is, a minus-19 in goals scored for and against while he was on the ice.

But he got things righted fast. As he said about his increasingly effective defensive play, “I just woke up in that department.” He was 8-12-20 in points production in his 30 Reign games.

But that sort of obscures his late surge. In his last 16 games, he was 7-6-13. He’ll score at the NHL level, too, if his time with the Sudbury Wolves of the AHL is an indication: 82 points in 50 games in his second Wolves season. He also had seven points in seven games at the World Junior Championship this past Christmas.

His game on Wednesday night featured nearly 18 minutes, and 12 faceoffs taken. Of those, he won eight. He tallied four shots on goal.

He didn’t score a goal, but there were lots of mini-highlights. In period one, he made a clever backwards chip off the boards to the front of the net, hoping for Trevor Moore, who was crashing to the net.

In the second frame, he took a puck from a teammate low in the zone and drove toward the net, trying a dish to the front of the net with a man there. It got caught up in John Gibson’s body.

In the final period, Byfield was just about everywhere, including in the penalty box. He high-sticked Jamie Drysdale on an offensive play heading into the Anaheim end. But that was the only miscue in a period in which he was highly visible. He had an early chance where he  got the puck, backed up, and shot. Gibson was forced to make a leg save.

Other details show that he feels confident taking the advice of the team to just play. I’ll cite a few:

Near the end of period one, Byfield tried to drive to the net around fellow first-rounder Jamie Drysdale. No go, but he’s willing to try the individual play.

In period two one of the great strengths he has that nobody has talked about was on display: deception. He tracked a puck to the corner in period two and made a clever, quick backhand pass out to Lemieux. Lemieux? Brendan. But what’s remarkable there is that Byfield was essentially getting double-shifted, because his linemates, as was said, were Moore and Kempe. Lemieux was one-third of the two-person fourth duo since the Kings were playing seven defensemen and thus short a guy for four forward lines. Brown played some shifts with him and Vilardi, but so did Byfield.

In another play, Byfield took the puck off the wall on the left side and then came backwards towards the line. As he did that, he looked like he was going to whirl and go to the net, but instead, he passed over to Kopitar on the other side of the slot. None of the moves were expected, and none were telegraphed.

Byfield also got some time on the PK, second unit, and the PP. The latter was a disaster, not for him personally, but for the Kings. No movement, no threat, nothing. One goal eventually, but even then, Coach McLellan said after that it was not good enough.

As the game went on, it seemed like Byfield was out there on every other shift. Back to the theme of deception—he got a puck back to him in the zone, and he took a wrister that, like one prior, went where nobody in the building could have guessed it was going. He also had a couple of chances in the late going, including one in which he had to take a second to secure the puck and didn’t quite get his shot off fast enough. It went off the leg/stick of the man defending him.

Was he perfect? Of course not. He gave the puck away on the half wall in period two. He went to his own net with an opposing player at one point and got in the way of his own goalie. He seemed at times to be unsure of himself in terms of positioning, overcorrecting to get back to the middle of the ice from the boards, for example. But as McLellan said, none of that signifies. He needs to play and feel like he belongs. The Kings can refine his game as they go along.

The Kings ended up scoring first, but not until period two. Lias Andersson missed a beautiful chance to end period one on a leg save by Gibson, who was excellent, as is always true. The Kings got two in period two, but they allowed the Ducks two as well. So to end the middle twenty, it was 2-2 in a game that, like almost all of them nowadays, the LA team had to have.

And yet they blew it. Period three saw Cam Fowler score a late goal to win the game for the Ducks.

When asked how he feels about his first game and whether he belonged out there on NHL ice, Byfield said, “I think so. I think there’s still a couple of teaching lessons that I can get out of this game and look forward to the next and just keep on improving.”

He summarized: “I know there is a lot to take away, but I feel like I definitely belong here.”

His coach, McLellan, was also positive, but it was more than accolades. He said that his increasing use of Byfield as the game went on was a sign of how well the youngster was playing. “I thought he started strong. . . . I thought he contributed to a lot of offensive chances. He was good in the circle. . . . He was probably one of our better players.”

A similar question provoked a similar response: “He earned the opportunity as the game went on. As I said, he was one of the better players. If we didn’t trust him, if we didn’t feel good to put him on the ice, we wouldn’t. I think his minutes and the opportunity he got reflects his play.”

The Kings needed the game to keep pace in their hopes to crack the playoffs. This was especially true since the Blues, holding down fourth in the West, won earlier in the night.

They  get two more cracks at the  Ducks, these in Anaheim, Friday and Saturday.

Also due some congratulations: Simon Benoit, who was making his NHL debut for the Ducks after being with AHL San Diego for this season and the prior two.

Brian Kennedy is a credentialed NHL media member and a member of the Professional Hockey Writers Association.