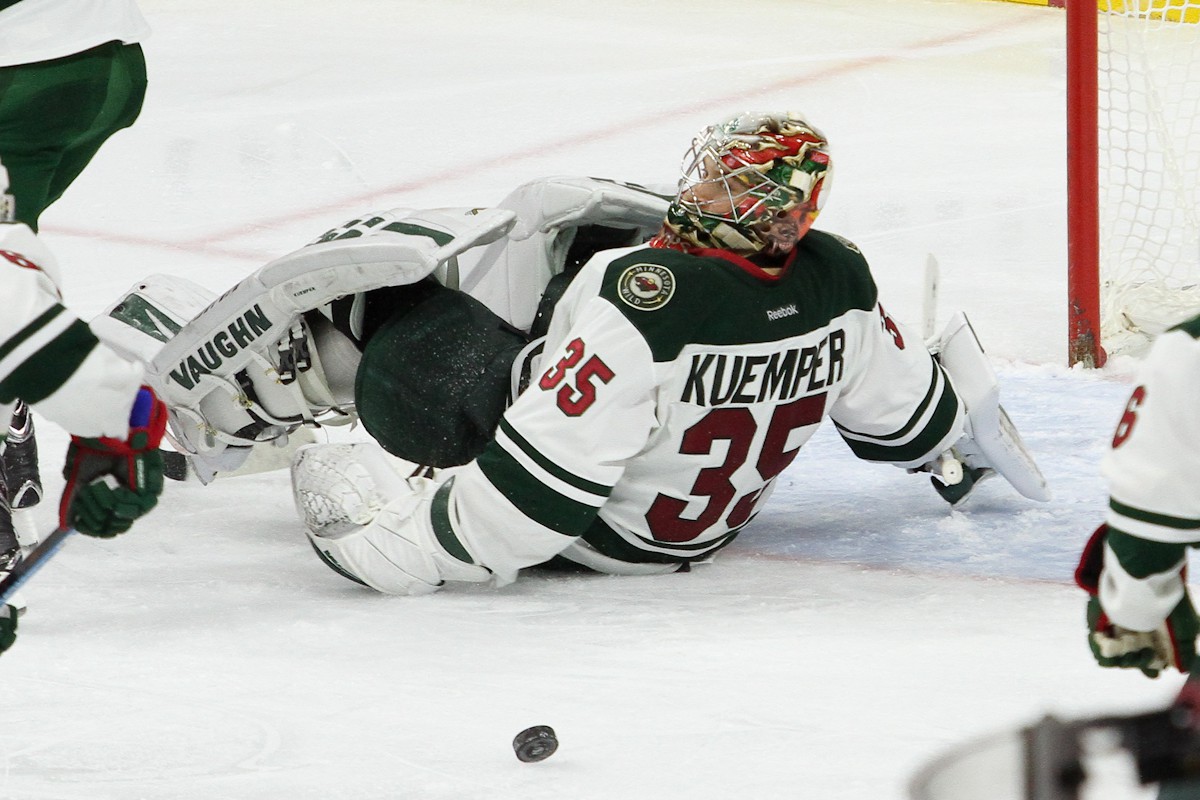 Everyone else is running away from the LA Kings, with even the Minnesota Wild, not most people’s pick for the Central Division crown prior to the season. Heck, even in numbers, the Kings are lagging nearly everyone. Three games, no wins, two goals, twelve given up, no stats on the power play except zeros. Is there any point in going on? Well, yes, because on Friday night, things would start to right themselves for the LA team.

Thing is, it might be OK if you could say, well, they’re playing OK. But they haven’t been doing that either, until their start on Friday night against Minnesota. The Kings stormed out to a huge SOG lead in period one, and it wasn’t just firing indiscriminately at the net whenever they had the puck. No, these shots were purposeful.

Take their lone power play chance of the frame. Twice the puck was fired to the left side of the net. Once it was purposely put off the boards for a rebound. Gaborik couldn’t stuff that one. The next time it came to Kopitar, but he couldn’t get the puck up and over the goalie’s pad. Later on, the puck came to Trevor Lewis in the front on the right side. He had no luck putting it in. Finally, late in the going, Derek Forbort, making his NHL debut, sailed a soft wrister in on net for the purpose of a redirect, and Lewis again was there, getting a backhand redirect away. None of this resulted in goals, but it was hopeful to see the Kings on the attack, and good to note at the end of period one that the shot totals were Kings 16, Wild 5.

Why was Forbort in there? Aside from the obvious need to shake things up, Matt Greene was hurt the other night against Vancouver. Funny that after the game, Sutter acted like he had been benched during period three. At least, that was the implication of his answers to the media after, and he definitely said that “as far as I know,” there was no injury.

Forbort, by the way, is a 2010 Kings draftee, first round, fifteenth pick overall. He came out of the University of North Dakota and has spent two full years with Manchester (now AHL Ontario). He doesn’t score much, with 5 goals in 141 games, but he doesn’t take a ton of penalties either, and he’s 6’4” and 212. You might remember that he and his teammates won the Calder Cup to exit New Hampshire.

But back to the night’s action, and the Wild. Those five first-period shots were anything but duds. The one noticeable thing about the Minnesota team’s play was that when they did penetrate the zone, they were dangerous. They had a way of spreading the Kings out, making them look like they could start to run around very easily, and they did, collapsing in on Quick.

If that weren’t enough, the Wild managed a mini-breakaway in the form of Matt Dumba getting a puck while he faced backwards going into the offensive zone. He spun and went on net, launching a high shot that Quick saved off his chest. It was an encouraging sign to see the goalie in the game, by the way. In case you’ve been in isolation, here are the facts on Quick: 3.71 GAA and .861 save percentage coming into the evening.

The teams each had one full man advantage, and the Wild were enjoying another one as the first period wound down.

Speaking of “on a tear,” which of course I actually wasn’t doing, how about Zach Parise with five goals already? Or Ryan Sutter with four assists? Or the whole Kings team with five points? OK, that’s coming into action Friday.

Exiting it, the Kings would have doubled their goal total, and Suter and Parise would each have an additional point, but in a losing effort.

The Wild had played Thursday evening, but they didn’t look particularly tired, though the first two periods of action featured mostly chances by the LA team. In period two, the Kings poured on the shots once more, with 16 to the 9 of Minnesota. The results were a goal for an LA team wondering if they would ever score again. It came at 1:13, on the power play, off a play where Carter held the puck in the middle of the ice entering the zone, then passed it to Lucic wide left. He in turn saw Toffoli way wide right and flung a pass over. Toffoli, who had already held one of the Kings’ two goals on the year, whipped a wrist shot past Darcy Kuemper, making his season debut.

The Kings mostly dominated the play for the rest of P2, with Pearson missing a chance right in front when a puck wouldn’t go on his backhand, Brown breaking a stick on an attempt to swat down and in a Muzzin rebound, and another chance for Toffoli on a Carter rebound. It was indeed all LA. The last shot they recorded came five seconds from the end of the period.

Period three was marred for LA by three minor penalties, the first of which saw Minnesota tie the game at one apiece. Koivu got the goal. They could have had a couple more, but twice, players passed the puck away while bearing down in the slot. For example Koivu, who passed wide to Parise, who threw the puck away instead of shooting.

The game ended 1-1, and the LA fans cheered loudly. Finally, a point.

Three-on-three was thrilling. Is that just because it’s new? Maybe, but it’s working right now. The Kings ended up taking the win off a broken play at the Minnesota blueline which went from Pearson to Kopitar. He shot after a brief delay and beat the goalie long side. Afterwards, he said he was tired. “I was trying to get it somewhere on net so that I could go for a change, since I was pretty tired,” he said in the locker room. “But I took a shot that, I thought it’s got a pretty chance that it’s going to go in, and obviously that’s what happened.”

The Kings now await the Avs on Sunday.

Matt Greene is hurt yet not on the IR list.

Derek Forbort was evaluated by Coach Sutter as having played a decent game, but Sutter said that he might play a “more assertive, aggressive game, understand the players he’s playing against.”

Read my books if you like. The newest one is Facing Wayne Gretzky.