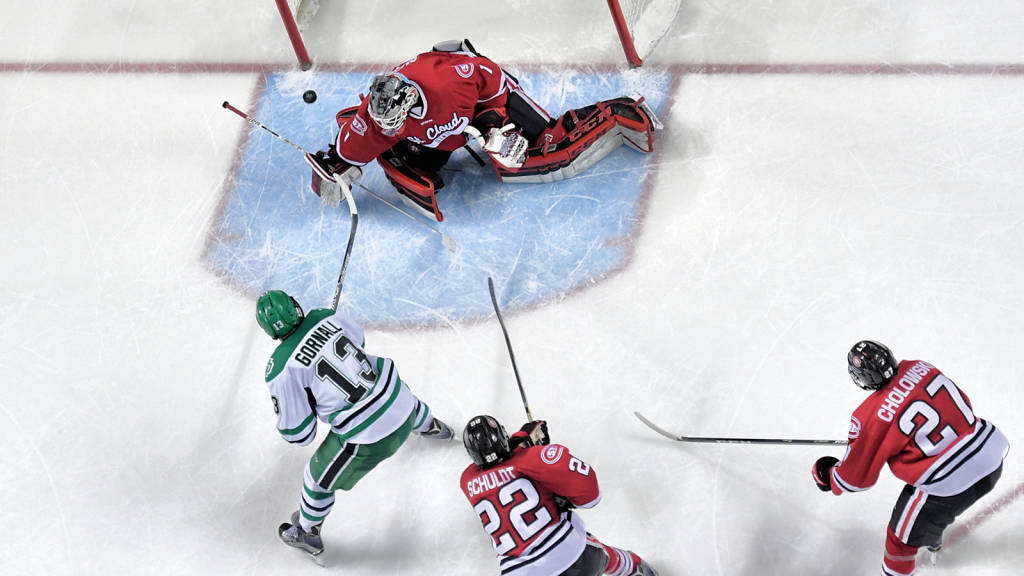 Grand Forks, ND – Entering Saturday’s NCHC matchup between the University of North Dakota and St. Cloud State, the Fighting Hawks were looking to pick up some much-needed points in the standings. They were also looking to stop a three-game losing streak at home.

Lately, it’s been tough sledding for the Hawks at home. During the recent rough patch, the Fighting Hawks are mired in a horrific slump on home ice going 2-7-2 in the last 11 games. Nothing has gone their way. It appeared that Karma was a thing of the past. Even worse, the Hawks had been shutout in two of the last three games they’d played and at times they looked a bit rattled. Eventually, something has to give, right?

On Saturday night, Hawks fans entered Engelstad Arena looking for a much-need win from the hometown team. They wouldn’t be disappointed.

Things didn’t start out great for the Hawks. At the 11:25 mark of the first period, the Huskies would score the game’s first goal on the power play.  Huskies forward Mikey Essyimont was positioned perfectly in the blue paint, waiting for a pass from Jacob Benson. The steady-handed Essyimont received the Benson pass and buried the puck into the back of the net, giving the Huskies a 1-0 lead.

Get to the Blue Paint

Good things happen in hockey when you get to the blue paint. In the second period, the Hawks started to take the momentum grinding out shifts in the Huskies zone. After some sustained pressure, the Hawks finally cashed in with the game-tying goal.

At the 14:10 mark of the second period, UND sophomore forward Mike Gornall would hit pay dirt when he skated through a Huskies defender to pick up a loose puck in the Huskies crease. Gornall made no mistake as he buried the puck in the back of the net. Tie Game.

Once the Hawks tied the game, you could feel the momentum shift to the Hawks.

“There were a couple of shifts there at the end of the second where we were back-to-back-to-back,” junior forward Trevor Olson said. “We were kind of rumbling around in their zone. That’s what we try to work on – you know – changing in the offensive zone. Kind of keeping that pressure on them. There were a couple of times there in the second where we put a couple together. Once that happened, we kind of knew in the third we were going to come back for this one.”

The game was tied at the end of regulation and would move to overtime. Gornall would score the game-winning goal just 41 seconds into the overtime period sending 11,744 fans into a frenzy.

With two of UND’s forwards out of the lineup, Gornall was the next man up. Gornall, the unlikely hero, a walk-on forward, has played a grand total of 12 games in his two seasons at UND. In the post-game press conference, Gornall took it all in stride, he was happy his team got the win.

“It feels great, the big thing is that we won,” Gornall said. “Wins have been a little scarce lately for us. It’s huge to get a win in our building going into the bye week, building momentum for the rest of the regular season”

Gornall broke down his game-winning goal.

“We were all very happy for him,” coach Berry said. “He’s a guy that comes to work every single day. He’s earns everything that he gets. He does it the hard way. It’s great to see him have a little bit of success here. We needed it. We need guys like that to step up. The moral on the bench was second to none.”

The win couldn’t have come at a better time. With the win, UND moved from 12th to 10th in the Pairwise Rankings. A win like this can propel a struggling team.

“It does a ton, especially going into the break,” Berry said. “You’ve got a week off. It wouldn’t have sat very well, losing two games. Or not having a chance to win this last one. It was well needed. The biggest thing for us, the last four games, we played well enough to win all four of those games. We have to take that and get better in different areas. To come out of the game without a win would’ve been a travesty.”

UND has a much-needed bye week next weekend.