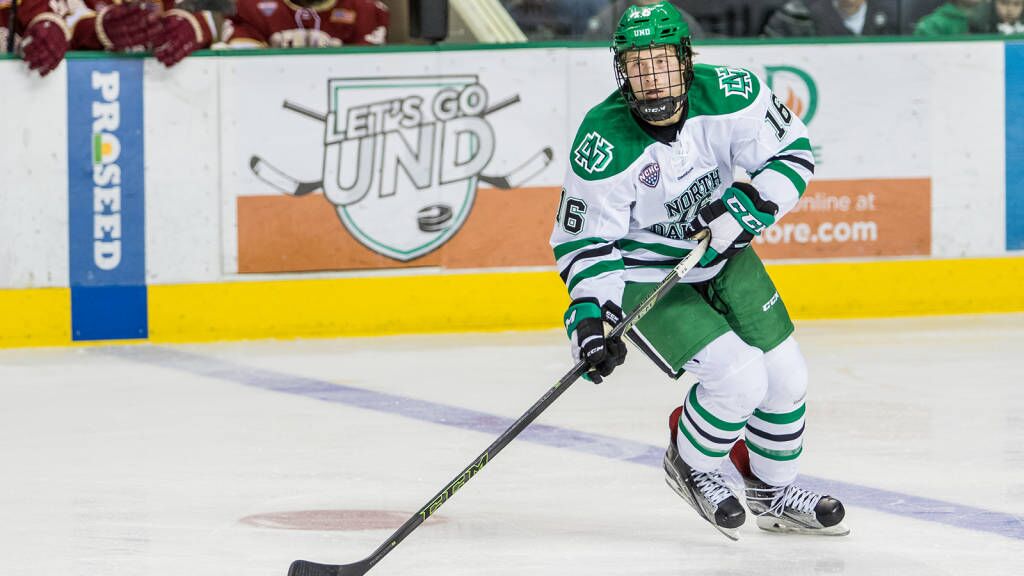 The University of North Dakota Fighting Hawks entered tonight’s game missing two of their top players. After having one of the top lines in college hockey, suddenly, UND was missing two-thirds of the CBS Line.

Last weekend, Caggiula was hurt early in the second period of Saturday’s game when he checked Maverick forward Steven Spinner at center ice. Caggiula is out for this weekend and it’s unknown how long he’s going to be unavailable.  Sophomore forward Nick Schmaltz suffered a lower-body injury in practice and won’t be available this weekend. Missing two of UND’s key players, the question was, who was going to score for the Fighting Hawks?

Tonight’s game was a tale of two games. The Fighting Hawks raced to a 4-0 lead in the first period with goals from Rhett Gardner, Luke Johnson (2), Coltyn Sanderson.

After scoring the fourth goal of the game, UND appeared to take the foot off the gas. Then you could feel the momentum swing in the Tigers favor. Tigers forward Christian Heil scored a shorthanded goal for the Tigers and then the roof fell in on the Hawks.

After the first period of play, it was apparent that scoring goals wasn’t an issue. Keeping the puck out of UND goal was. The Tigers would score five unanswered goals before UND’s Gardner would getting the game-tying goal with 31 seconds remaining in regulation.

After the game Fighting Hawks head coach Brad Berry seem less than pleased with the way game one played out.

“I think the turning point was the shorthanded goal,” Berry said. “That gave them that one goal to get back in it. They made a mindset of chipping pucks, getting it deep and getting after us. We didn’t play the right way after that four-goal lead. That’s a hungry team that’s very good that been playing well over the last two months. It’s going to be a battle tomorrow.”

Tonight, it’s safe to say that UND played really well for 20 minutes and then struggled for 40 minutes, that doesn’t win hockey games in the NCHC.

“First of all, you have to play the right way for 60 minutes, 20 minutes doesn’t win a hockey game,” coach Berry said. “When you got momentum, you got to try and keep momentum. That’s building shift after shift – playing the right way. When you get away from it, then the momentum falls to them. I think basically it’s game situation of managing the game even when you’re up.”

After struggling during the middle part of the season, sophomore forward Luke Johnson has caught fire and scored four points in two games (3g-1a—4pts).

A subdued Johnson explained, “I take pride in playing the same way ever night, being a hard two-way centerman and just getting more pucks at the net and being at the net. Whether I am playing center or wing, I try to play the same way.”

Tomorrow night, the same two teams will faceoff in game two of the series. Game time is 07:07.