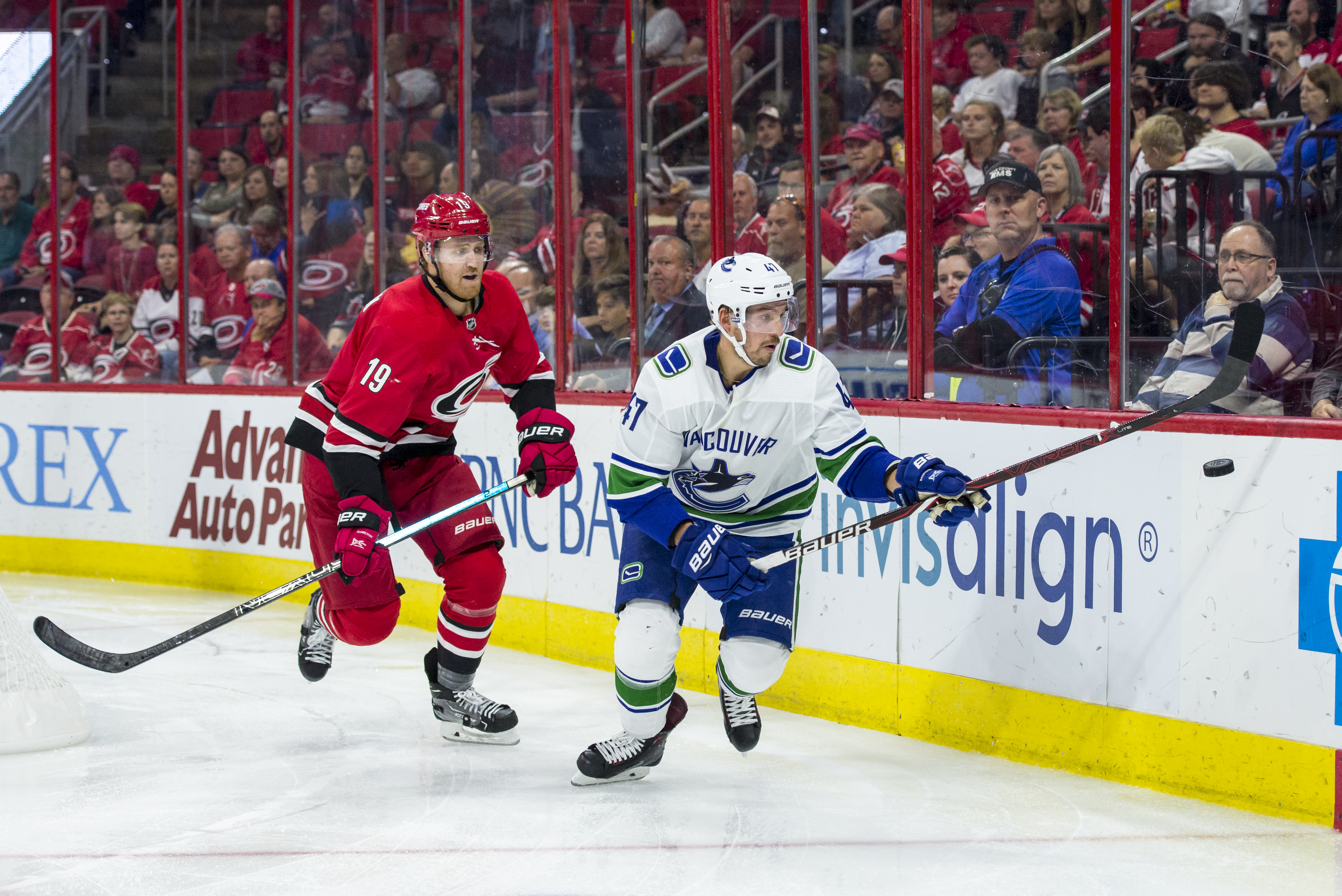 SVEN BAERTSCHI (47) and DOUGIE HAMILTON (19) battle for the puck in the corner during a game between the Carolina Hurricanes and the Vancouver Canucks. The Hurricanes won 5-3.

Ferland, Hamilton Proving to be Key Acquisitions for Hurricanes

Things are looking different in Raleigh this season. Now four games into the season, the Hurricanes have not lost in regulation yet. A few other things join them, along with their 3-0-1 record thus far; a new owner, a new head coach, and new faces throughout the lineup. Part way through the season last year, many Hurricanes’ fans started noticing changes as the fan experience was tweaked for the better. This is when new owner, Tom Dundon, started his era of Hurricanes’ management. Since then, fans have seen long time Hurricanes’ player Jeff Skinner and Conn Smythe winning goaltender, Cam Ward, depart the Raleigh franchise.

Many fans didn’t know what to expect with the changes, and talk was going around town saying Dundon wants the Hurricanes to tank so he can make the move back to Houston with the team. With the way things are going, that’s not going to happen any time soon.

If you’ve been to a Hurricanes’ game any time in the past five years, then you are most likely accustomed to a few things: low energy, a team with no fight, and big losses. The team this year isn’t looking like a team from seasons past. In fact, it’s not looking like a Hurricanes team we’ve ever seen before. While it is still too early to judge the season and what the Hurricanes may get as the end result, fans can still evaluate what has been going on.

One of the most notable things that can be seen this season is physicality. Between standing up for each other on the ice and playing a physical game-style, the Hurricanes have never been as physical as they are showing this season. That may be a result of head coach, Rod Brind’Amour’s training camp names, Team Grit and Team Grind. Anyhow, the physical play style they have unveiled this season is refreshing to see, and many fans would probably agree.

Two key guys bringing physicality to the Hurricanes are forward Michael Ferland and defenseman Dougie Hamilton. These guys were traded during the 2018 NHL Draft for former Hurricanes Elias Lindhom and Noah Hanifin. Ferland is most notable for playing on a line with Johnny Hockey while he was in Calgary. He is a great support player and with his 6’2 frame it’s nice to have him on the ice with your star players, like Teuvo Teravainen and Sebastian Aho, in case he needs to drop the gloves with someone, as was the case during the final preseason game when P.K. Subban was going after Aho on three separate occasions.

Through four games this season the Aho, Teravainen, and Ferland line has registered 15 points. On the defensive end, Hamilton has been playing very well and is showing why he is in the top defensive pairing. Through four games, he has only registered 2 assists; however, that doesn’t mean he isn’t a huge force defensively. Hamilton’s skills are honed a certain way that allow him to play very physical while having very good puck skills for a d-man.

With all of the changes coming to fruition, Hurricanes fans have a lot to look forward to. The arena has been electric so far, and in turn, the Hurricanes have been producing. If the Hurricanes can keep this pace up, fans in Carolina can expect to see a lot of great things happen this season. With the state fair in town this week, it will be interesting to see how the Hurricanes fair on a small road trip. The Hurricanes next home game is October 20th at PNC Arena when they take on the Colorado Avalanche, so until then #TakeWarning.