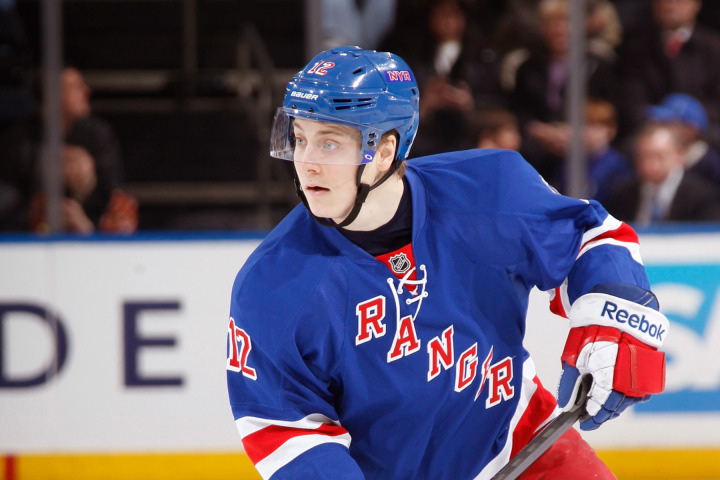 NEW YORK – After scoring his first-career National Hockey League goal during the Rangers’ 5-2 win over the Flyers Saturday afternoon, Jesper Fast stood by his locker and spoke quietly to reporters, who were wondering what his goal felt like.

Rangers coach Alain Vigneault wasn’t in that scrum, but he was also wondering what Fast was feeling.

“I’d be curious to ask you what he said when you asked him the question,” Vigneault said to reporters while breaking into his trademark grin. “He’s not the biggest talker. Doesn’t talk a lot to me, doesn’t talk a lot to anybody. He’s a really good kid that works extremely hard and deserves every minute right now being up in the NHL.”

Fast’s goal tied the game in the second period, a tally that helped lift the Rangers (11-8-4) out from under a lethargic haze during their second straight afternoon game. They added three more goals in the third en-route to their 10th-straight home win over the Flyers (8-12-3), dating to Mar. 6, 2011.

“Especially in the second period, both teams were kind of flat, there was not much going on,” said Derick Brassard, who scored a pair of goals for his fourth-career multi-goal game. “But as soon as Jesper scored, it gave our bench a huge lift. I think it was the key moment of that game. The momentum was on our side for the rest of the game.”

“Very happy for ‘Quickie,’” said captain Ryan McDonagh, using the nickname the Rangers have given their 22-year-old Swedish-born rookie. “Jesper, he’s been playing tremendous since being called back up. I said yesterday he made a lot of little plays that didn’t show up on the scoreboard. Here, he gets rewarded with a huge goal. It’s great to see that out of a young guy.”

J.T. Miller, who was called up from Hartford (AHL) yesterday afternoon following the death of Chris Kreider’s grandfather, also scored for the Rangers, netting his first of the year to give New York insurance halfway through the third.

“It’s great to see ‘Millsy’ play the way he did,” said forward Derek Stepan. “It’s no secret that the kid can really play. He really is a good hockey player.”

Miller also assisted on Fast’s goal, giving him his second-career multi-point game in the NHL. He made the Rangers Opening Night roster after a tremendous training camp before struggling early in the season and being demoted last month. While with the AHL Wolf Pack, he’s been one of the team leaders, scoring six goals and adding nine assists in 18 games.

“It’s great to see that,” McDonagh said. “J.T, a player that’s been up and down, it’s a great opportunity for him to showcase himself and I think he came in with a good attitude today.”

“They played a real strong game,” Vigneault said of his fourth line, which included Miller, Fast, and center Dominic Moore. “In the second period, for eight or nine minutes we sort of lost momentum. That line came back, scored the tying goal. After that, I really thought we had good momentum.”

Maybe it’s just because they were facing the woeful Flyers, now 1-7-1 in their last nine games. The Rangers are starting to look like the team Vigneault and general manager Glen Sather envisioned over the summer before injuries threatened to derail the season during the opening 20 games. They’re now 10-5-4 in their last 19 games and 8-2-3 in their last 13 contests at home. Things seem to be starting to come together.

“The games that we did lose, it seems that we weren’t able to bounce, to respond,” Stepan said. “We’ve gotten much better at doing that. It’s huge for us, and we have to continue to do that.”

“We’re working on it,” said goaltender Henrik Lundqvist (21 saves). “I think we have to prove it on Monday [against the Lightning], that’s a big game. Playing Tampa and playing Philly is two different games.”

Before the game, Rangers coach Alain Vigneault announced Tanner Glass has the mumps, a contagious disease that’s made its way through a few NHL locker rooms lately. He’s being isolated from the team until Monday night. After Saturday’s game, players were in the trainer’s room getting vaccines.