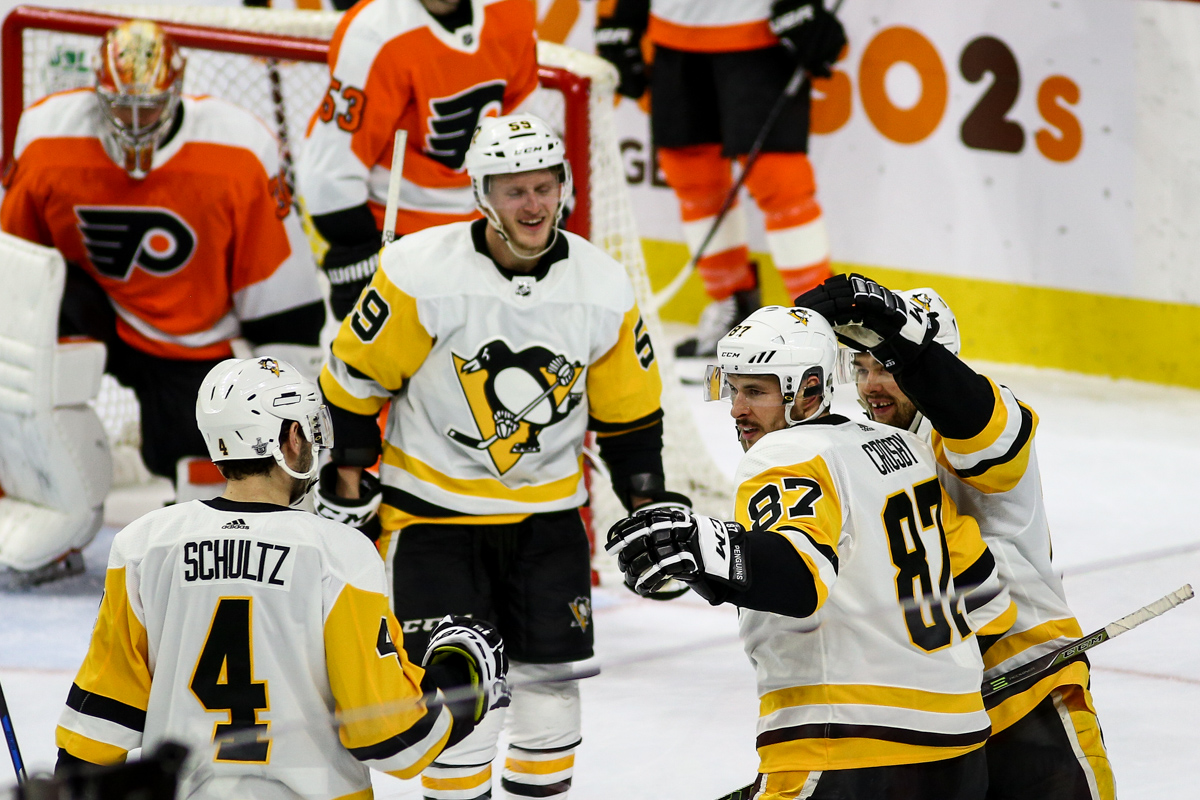 Center Sidney Crosby (#87) of the Pittsburgh Penguins is congratulated by teammates Defenseman Justin Schultz (#4), Center Jake Guentzel (#59), and Center Dominik Simon (#12) after scoring a goal against the Philadelphia Flyers

The Penguins gave the Flyers life in Game 5. And, for the better part of two periods, they continued to do the same in Game 6.

Playing in front of their home crowd for a chance to tie the series, Philadelphia came out with a dominant start, outshooting the Penguins 7-1 in the first five minutes and getting on the board just 2:15 in.

But then the Penguins started to come the other way. Five minutes after that opening goal from Sean Couturier, Pittsburgh had closed the shot count to 8-5 – and put two of those chances past goaltender Michal Neuvirth in a 47-second span to take a 2-1 lead.

The Flyers tied it by the end of the period, and the teams went to the locker rooms with a brand-new game to start the second. Couturier again opened the period with a goal, this time just 40 seconds in, and the Flyers padded their lead to 4-2 midway through the frame.

Then the Penguins came back to score two more, including the first of what would be a very good afternoon for sophomore forward Jake Guentzel. Again the teams went to their dressing rooms with a brand-new, 4-4 game to start a third period that would either end the Flyers’ season or send the teams back to Pittsburgh for a winner-take-all Game 7.

“We were thinking about much more than trying to close it out,” said Penguins captain Sidney Crosby. “Just because the more they hang around, and you get that one game, anything can happen.”

Just 30 seconds into the third period, though, Phil Kessel skated in toward the net, deked and passed the puck to Guentzel, who put the Penguins ahead, 5-4, for the last lead change of the game.

And The Jake Guentzel Show was just getting started. He scored at 19:06 of the second period then at :30, 12:48 and 12:58 of the third for the natural hat trick plus one. That included the fastest two playoff goals ever for a Penguins player, 10 seconds apart, beating Petr Nedved’s 11-second mark against the Washington Capitals in 1996.

“That was something special,” said Penguins goaltender Matt Murray. “Never seen anything like it, to be honest. Just really fun to watch – and, obviously, a huge performance for us.”

“He did such a great job last year in the playoffs, but he’s raised his game again to another level,” Crosby said. “And it’s more than just scoring. He’s making plays; he’s hard on pucks. He’s doing a lot of little things, too. It’s great to see him rewarded. He was definitely on today.”

Couturier picked up another at 17:07 for a hat trick of his own, made all the more impressive with postgame news that he had played the last two games with a torn MCL. That got the Flyers as close as 7-5 before Penguins winger Bryan Rust iced it with an empty-net goal at 19:29 for the 8-5 final.

Game 6 was the most physical of the series, with some big hits and controversial non-calls. Kessel tried to challenge Flyers captain Claude Giroux to a fight after this one in the second, which sent Carl Hagelin out of the game looking dazed. The Penguins would be without him for the rest of the contest.

Carl Hagelin heads to the locker room after this hit from Claude Giroux. pic.twitter.com/zug4DW6C1v

Then there was this Kris Letang trip on Couturier, taking him out of the play seconds before Guentzel’s third goal.

Blatant trip goes uncalled and the Penguins score to go up 6-4 pic.twitter.com/hH2JXOkESs

In the end, though, the Penguins’ offensive firepower was the difference. Just like in their sweep of the regular-season series over Philadelphia, Pittsburgh scored five or more goals in each of their four wins in this series. In the two losses, the Flyers held them to a combined three goals.

The Penguins’ penalty kill also held a dangerous Flyers power play off the board in three opportunities Sunday. One of those was a critical 4-on-3 midway through the third period, when the game was still very much within the Flyers’ grasp with a one-goal deficit.

“It was huge for us,” said center Riley Sheahan. He stepped up in a big way Sunday, not only on the PK but in the second-line center spot usually held by Evgeni Malkin, who missed with the apparent leg injury he suffered in Game 5.

“It was an unfortunate position we put ourselves in,” Sheahan said. “But I think the guys we have on our PK group look forward to having that chance, diving in front of some shots and creating some momentum for the team. It’s a lot of fun playing in these types of games; it’s what we all prep ourselves for.”

“It was a huge part of the game,” Sullivan said. “And to be able to get through that unscathed was critical to the win. I thought the guys on the ice did a tremendous job, and Matt made one 10-bell save there to keep it out of the net, which was probably his best save of the night.”

Now the Penguins get to rest, heal and watch the Washington Capitals and Columbus Blue Jackets battle for at least one more game to determine who they’ll face in the next round.

They’ll value as much time as they can get after battling with the Flyers.

“We didn’t get it done in Game 5, we’ve got to come back to Philly, which is a hard place to play, and our team doesn’t get rattled,” said Penguins head coach Mike Sullivan. “They just embrace the challenge. I think that’s why our team has been able to accomplish what it has. We knew this was going to be a hard-fought battle, and it was.”

“Things aren’t always going to go your way, especially in the playoffs,” Murray said. “There will be times when you’re going to fight it a little bit, and tonight was one of those nights. It wasn’t a perfect game by any means; not even close. But we got the job done.

“This time of year, it doesn’t matter how; it just matters that you get the win. I couldn’t be more proud of the way we competed today.”