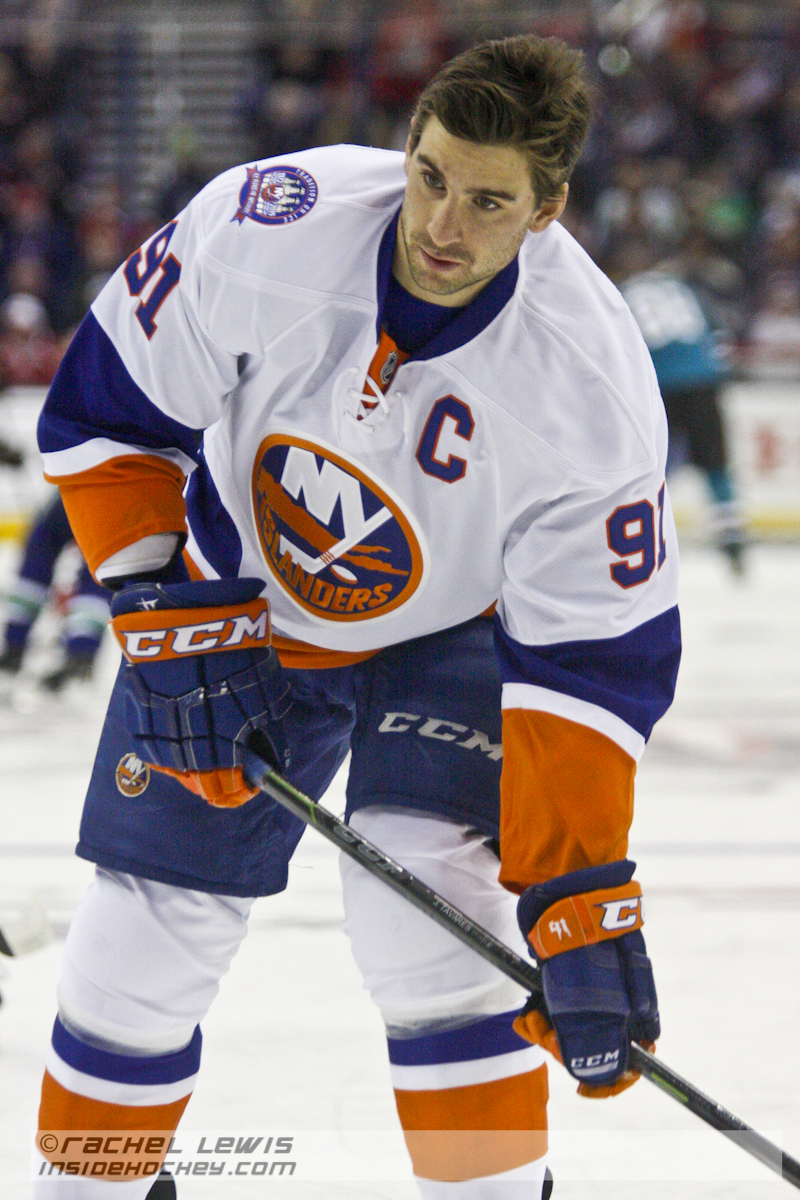 The LA Kings lost at home Tuesday night 3-2, beaten by a veteran who used to play for them, Brad Richardson, but really defeated by what their coach indicated was a soft effort on defense. In fact, he was so disappointed about what happened, he got mixed up about it. “I think we were soft on two or three goals against,” the LA Times quoted him as saying. “All three goals against. They only scored three,” he was further said to have uttered. It must have just seemed like more.

For Richardson himself, it was more a question that the Kings didn’t get the chance to get their “below the dots” game going. That, he said, is the grind they’ve played for years, and when they don’t do it, or when they’re prevented from doing it, then they aren’t playing their game. And when that happens, they don’t win. I added that last bit, but hey, it’s correct.

Thursday night with the Islanders in town, nine guys who play blueline duties were listed on the Kings roster or having been on it at some point this season. They included the aforementioned Forbert along with injured Matt Greene, three pairs of two—Muzzin and Martinez, Doughty and Brayden McNabb, and Ehrhoff and McBain—and Jeff Shultz, who played opening night and is now with AHL Ontario.

So what to do given the need to bolster the defense? Drop Derek Forbert, who played nearly 21 minutes against Arizona, out of the lineup, and insert Christian Ehrhoff, who was reported in one local newspaper this week as having fallen out of favor with the coaching staff in LA. He had missed two games in a row after having played about 15 minutes a night for a few games after starting the season at above 20 on average in the first few games.

He was paired with Jamie McBain, who was playing his fifth game in a row after sitting one early in November. So how good would the Kings’ defense be with these changes?

The game versus the Islanders, if it was supposed to do something to remedy the problems on D, showed nothing good in the early going. The Kings allowed the Islanders down below their dots, if you want to use that way to describe the game, twice within the first minute. Tuesday in San Jose, the New Yorkers had scored at the 36-second mark. Fortunately for the Kings, that didn’t happen Thursday, but the chances were there, and about halfway through the first period, the visitors capitalized.

They got the puck low and then passed it to the half wall. The Kings forwards chased, Drew Doughty stood watching, lost somewhere between the area behind the net and the slot, and Brock Nelson put the puck over the goalie’s near side shoulder. The LA team looked entirely lost. Along with Doughty on the ice was McNabb. It was an even-strength goal.

The puck came back from Kopitar after he won it and saw it go to the boards to be recovered by Carter, and Ehrhoff put it across the blueline without even thinking. Doughty was there for a one-timer. As happens when he uses his short windup, the shot was accurate and fast, getting past a crowd of traffic in front (Lucic) to find its way over the goalie’s shoulder. Coach Sutter was later to call that “an old-fashioned goal,” and comment “used to work all the time.”

Ehrhoff gave something back when he took a penalty two minutes later, for interference, but honestly, the call was soft. In fact, nobody quite knew who it was on. The coach was shown on the big screen going around asking his assistants what was up. McBain was at first indicated as the sinner. He went to the box looking perplexed, but was replaced by Ehrhoff. There had been a tangle-up in the Kings’ end, but no foul.

Nevertheless, the Kings had to kill that as the first ended and the second started. They created a bit of excitement when, after a clear down by Martinez, Islanders goalie Halak came way out to clear the puck. He iced it, giving the Kings a break on their penalty kill.

Are shots any indication of defensive acumen? If so, then the Kings were outplayed in period one on that front, with 13 shots allowed to 8 in their favor. The hits were 13 LA to 10 New York, but that’s something that happens almost every time LA plays at home. Perhaps good, though, was that those hits came from the defense mostly, with McBain leading with three and the defense altogether getting seven. Dustin Brown, who hits everything that moves and gets credit for doing so even when it’s marginal, had just one.

For you Corsi-esque folks, perhaps important was that the Kings had 14 misses or attempts blocked in the first frame, with the Isles having only five. So either “Gee, the LA team shoots wide a lot,” or “Gee, the Isles forced a lot of shots to the outside.” I guess that depends on your predilection for one team or the other, and no, numbers can’t measure that.

Kings scored a second goal in period two, and you might interpret the fact that it held up to the end to say that the LA defense was good in a tight game. In fact, they weren’t. Sure, a win’s a win and all that, but the Islanders were all over the LA team in their own end, and they seemed to have the slot open to them at will also. They fired away, though to the Kings’ credit, lots of pucks hit legs, but they also shot wide, often, and this was the margin of difference more so than anything LA did.

Witness these closing numbers. The Islanders had a total of 30 missed and blocked shots. They actually got 32 on net. The Kings, by contrast, had 22 shots, and 33 missed or blocked. They were outhit 38-33. That means that as the game went on, they got less aggressive. Four shots in the final period was all they had. The Isles had 12.

One funny thing, too, is that the Kings got desperate with their D towards the end, and more than once, Jeff Carter came down from his center position to play Matt Greene-style defense, standing right in front of goalie Enroth. Like, on the edge of the crease. Good for him, but who was supposed to be doing that job?

One who was spectacular was Enroth. He plays a low, tight game, often flicking out a leg to get a puck that comes in low. His push from side to side is quick, and if he doesn’t have quite the explosive power that Quick does, he might best be described as showing contained aggression. He had to, because the pucks were all around him most of the night.

After the game, he said, “I think everybody played a pretty solid game. It was nice to get a home start. I felt everybody played good.” He added that he stays sharp during practice and stays in condition, and that he recognizes that as the backup, he won’t get a ton of chances but that he has to take them as he finds them. “It’s up to yourself to stay on top of it during practice, but games are a completely different animal. It’s a tough craft to manage, but these first three games have been going pretty well for me.”

Sutter had a comment about his netminder also. “I thought he made some big saves in the third, especially on the penalty kill. He seen a lot of pucks in traffic and covered a lot of pucks from us. We needed him to win a game. We lost a couple of games at home here and hadn’t given up many chances. Tonight we probably give up more chances than we had in quite a while, and we needed him to do that.” By the latter, he meant to come in and play as well as the regular goalie has done.

The Kings now face Edmonton on Saturday night. Start is a rare 7pm, rather than 7:30.