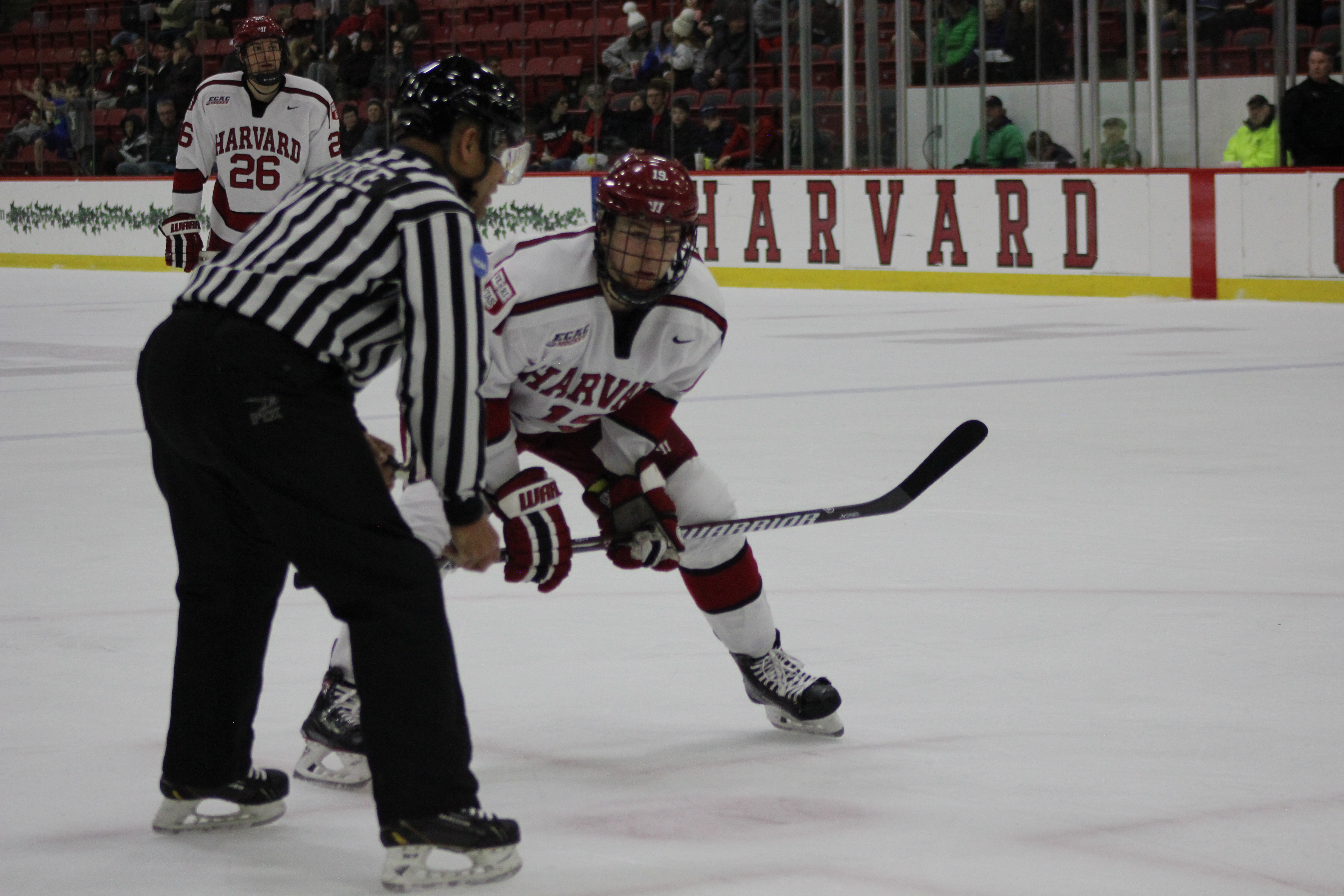 Lake Placid, NY. — For the fourth straight year, Harvard is in the ECAC Semi-Finals, and for the second straight year they will face off against Clarkson. Cornell will also take part in the weekend’s festivities in upstate New York for the third year in a row. While Brown will be making its first appearance since 2015. The overall seeding was Cornell at # 2, Clarkson at # 3, Harvard at #4 and Brown at #8. Cornell will take on Brown in the 4:00 pm game while Harvard and Clarkson will have the 7:30 pm game.

This promises to be an exciting weekend with multiple storylines. Brown as the “giant-slayer” knocking off defending champs Princeton in the first round, then upsetting top seed Quinnipiac in the quarterfinals in a sweep. Cornell, Clarkson, and Harvard are all looking to solidify their places in the NCAA tournament next weekend, while Brown hopes to qualify by winning the tournament. Cornell hasn’t won the ECAC tournament since 2010, Clarkson since 2007, and Brown has never won it. Harvard, who last on in 2017, has been playing their back-up goalie, Cam Gornet, for the last seven games, with much success.

The season series leaned Cornell’s way. The Big Red held on at home in early November for a 3-2 win. Brown fought back from a third-period 3-0 deficit to earn a 3-3 tie in mid-February. The Bears have been on a roll since the start of 2019, going 11-6-2 in the new year. Brown seemed to get past both Princeton and Quinnipiac with relative ease, granted the clinching game vs the Tigers was a triple overtime thriller. The Big Red meanwhile needed all three games to get past a solid Union squad. Cornell has gone 13-4-4 in the same stretch and has been one of the most consistent teams in all of NCAA hockey.

Brown will need the continued performance in goal that Gavin Nieto has been giving them all postseason. The play of Brady Schoo at both ends of the ice has been excellent these last few weeks. Tommy Marchin, Brent Beaudoin, and Colin Burston have been hot. The Bears have been getting it from everyone this postseason and will need to do that and more to advance further.

Cornell lost to last year’s “giant-slayer” Princeton in the final so they will be wary coming into this one, coupled with the way they last played Brown. The Big Red will continue to rely on the steady goaltending of Matthew Galarjda. Defensively Cornell is solid allowing only 2 goals a game, good for sixth in the nation. A stout defense led by Matthew Nuttle (ECAC Defensive Player of the Year), Alec McCrea, Yanni Kaldis, Brendan Smith and Cody Haiskanen will give most teams fits. Nuttle and Kaldis produce offensively and add another dimension to Morgan Barron, Mitch Vanderlaan, and Cam Donaldson’s attack. Cornell can’t sleep on Brown, they’ll need all 60 minutes, if not more, to prevail.

The two powerhouses split their regular season series with each winning on home ice. Harvard prevailed 4-3 in overtime in late January, while Clarkson won 5-3 in the game that Harvard lost starting goaltender Michael Lackey in just over a month ago. Each team took care of business efficiently last weekend in sweeps against Ivy Leaguers. For the Golden Knights, it was a pair against Yale 3-1 and 5-2. The Crimson meanwhile upended Dartmouth 3-1 and 4-3 in overtime. This game should be very tightly contested, and will basically be a home game for the Golden Knights due to the proximity of Clarkson University.

The Crimson have gotten the goaltending they needed from Gornet since taking over for Lackey. Their offense starts from the back end out with Hobey Baker Top Ten Finalist Adam Fox and Reilly Walsh powering the offense with 46 and 31 points thus far. Fox leads the country in assists with 37, and Points per Game with 1.48. The Crimson also lean on a plethora of talented forwards starting with Lewis Zerter-Gossage, Jack Drury, Jack Badini and Casey Dornbach (ECAC Rookie of the Year). Harvard will have revenge on the mind in this one, after falling to Clarkson 5-4 in OT in last years semi-finals.

Clarkson has one of the top goalies in the nation in Jake Kielly, who has started every game this season. Kielly is a huge reason why the Golden Knights are fourth in the nation with 1.96 goals against average. Clarkson has one of the countries most balanced teams led by Nico Sturm (ECAC Best Defensive Forward), Haralds Egle, Josh Dunne, and Devin Brosseau (ECAC Student-Athlete of the Year) on offense. While Aaron Thow and Greg Moro get involved at both ends, Jordan Schneider and Connor McCarthy add to the solid defense.