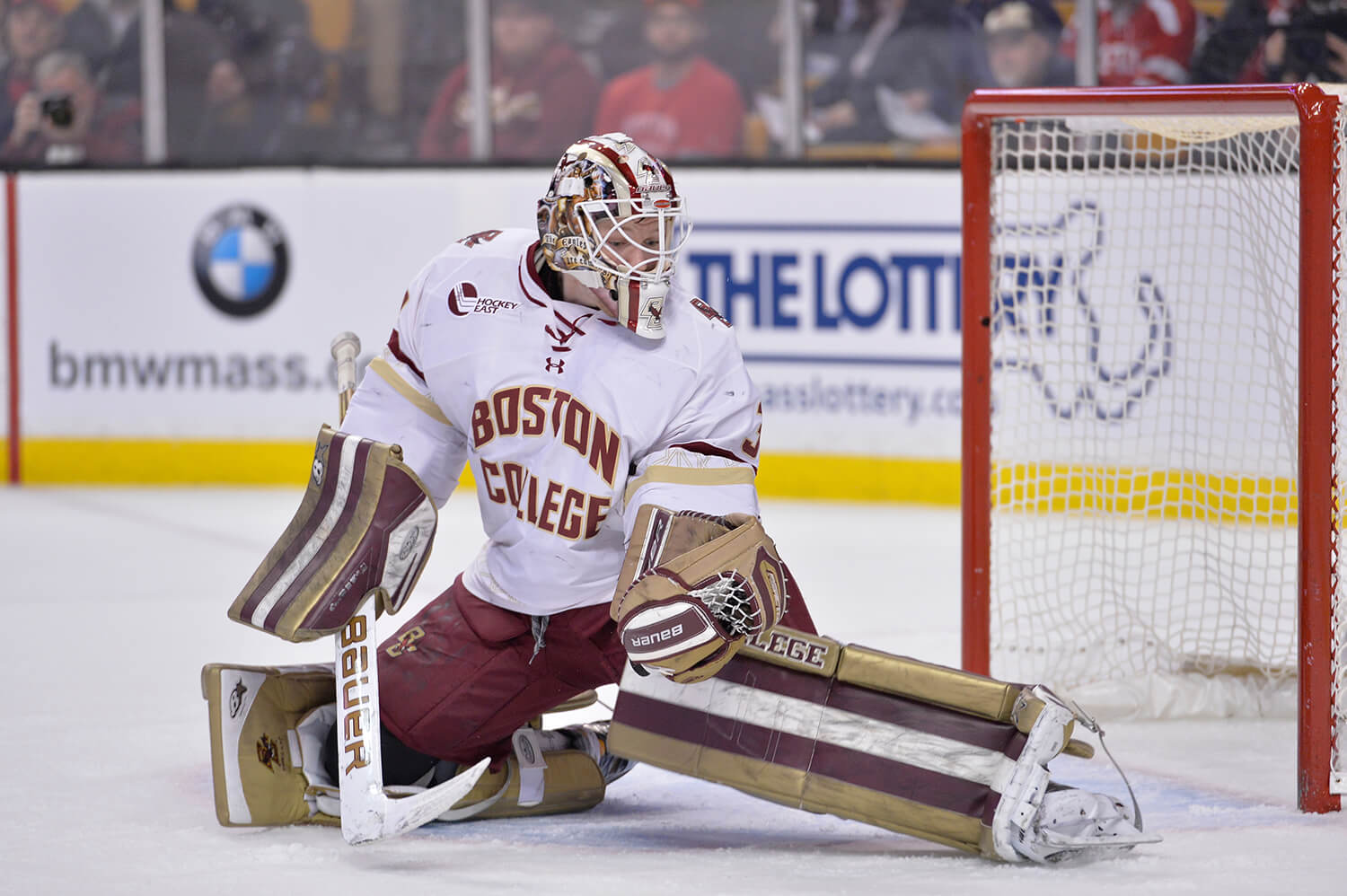 Chestnut Hill, MA — The Boston College Eagles dominated college hockey for two decades like few programs have dominated their respective sports from 1998 to 2016. They appeared in all but two NCAA Tournaments in that stretch, won nine of their record eleven Hockey East tournament titles, made twelve Frozen Fours, and claimed four of their five National Championships.

The current senior class of Ian Milosz, JD Dudek, Christopher Brown, Michael Kim, and Casey Fitzgerald are among the last echos from the last Eagles Frozen Four trip in 2016. On Friday night, the Eagles likely played their last home game of the season and sent their seniors out the right way against rival Northeastern.

The opening frame was goal-less but still eventful. BC outshot Northeastern 14-7 but both teams had good looks on the other’s goalie. Joseph Woll and Cayden Primeau were up to the task and kept the game scoreless to the intermission.

Northeastern maximized their chances early in the second. Liam Pecararo found space off at the left circle and whipped a shot on net. Senior transfer Austin Plevy tipped the puck up and over Woll for his fourth goal of the year and the first goal of the night. BC didn’t stay down. They hemmed Northeastern in their own zone and worked the puck around for the best look. Senior Captain Casey Fitzgerald found space atop the right circle and fired a puck bar down for a tie game. BC controlled the remainder of the frame but did not break the tie.

The Eagles jumped on Northeastern off the third period’s bell and dictated the pace. They were rewarded. Marc McLaughlin found space at the right doorstep and caught Primeau out of position on a bouncing puck and scored his second goal of the season 6:04 into the frame. Northeastern did not muster much offense, only matching BC’s nine shots, and Joseph Woll stopped every shot he faced for the remainder of the night.

David Cotton ended the scoring with an empty net goal, his 19th of the season. The Beanpot rivals shared a few more pleasantries after the final goal, namely a Jeremy Davies major penalty and misconduct, but BC closed the night with a 3-1 win. The Eagles stayed on the ice en extra moment to allow the seniors a final bow before the Conte Forum faithful.

Northeastern drops to 21-10-1 and 13-8-1 in Hockey East. The Huskies stay in a points tie for third place in Hockey East with UMass Lowell thanks to a New Hampshire win over the Riverhawks. NU stays in the fourth spot for the upcoming Hockey East Tournament, only two points ahead of Boston University.

“It wasn’t important enough for us,” commented Northeastern Head Coach Jim Madigan. “They wanted it more. They took it to us. We need to play with more urgency tomorrow night. Our guys think they’re good. We’re not good unless we work hard.”

Cayden Primeau stopped 30 of the 32 shots he faced.

Boston College improves to 11-18-3 and 10-9-3 in Hockey East. The Eagles stay in the seventh seed for the Hockey East standings, two points ahead of New Hampshire.

“We’ve been in so many one-goal games that it’s clearly a confidence boost to win another one-goal game,” observed BC Head Coach Jerry York. “I liked the way our team played. We’ve got to be a little cleaner when we’ve got the puck. But a big boost for our confidence.”

BC and NU will rematch on Saturday night at Matthews Arena. Northeastern faces New Hampshire on Friday, March 8th, to conclude the regular season, also at Matthews. BC ends their regular season with a trip to Providence on Thursday, March 7th. All remaining games start at 7 pm ET.