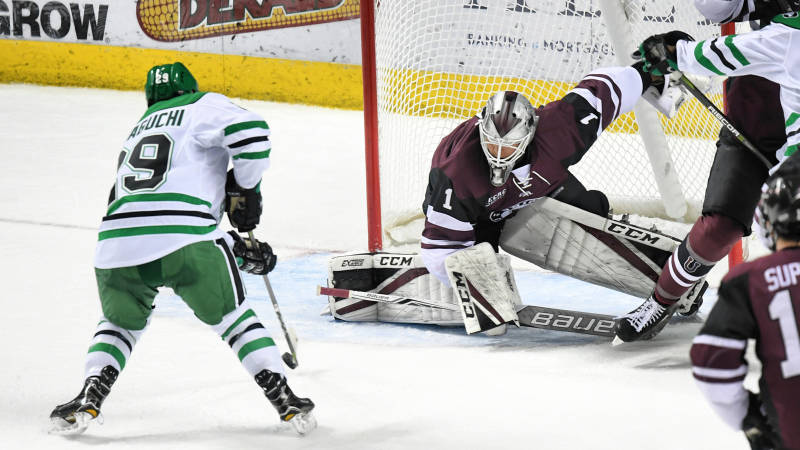 While it sounds cliché, UND came out of the gate like they’d spent Thanksgiving Day stuffing their faces with turkey and dressing. It showed up where it mattered the most, on the scoreboard. After one period of play, UND found themselves down 2-0 with goals from Union forwards Ryan Walker and Sebastian Vidmar. During the first period, the Fighting Hawks were outshot 9-8.

In the second period, UND started to get the momentum but couldn’t get anything to go. They pressed hard and outshot the Dutchmen 19-4.

Finally, in the third period, junior defenseman Christian Wolanin would find the twine with a beautiful goal. Before the Public-Address Announcer Darrin Looker could announce the Fighting Hawks first goal of the game, Dutchman defenseman Vas Kolias was putting the icing on the cake for the visitors.

Just a baby Cannon from Wolanin™ this time. pic.twitter.com/8ARKSZ6yaS

After the game, Wolanin summed it up in one word, “Horrible.”

The Detroit, Michigan native didn’t need to say anything else. It wasn’t a good effort from the hometown team.

So far in the 2017-18 season, Fighting Hawks fans have a lot to be thankful for. After UND’s 4-1 loss, Head coach Brad Berry was less than thankful for his team’s effort.

“Puck battles… second to all loose pucks,” Berry said. “Pucks going on and off our tape. All of the execution things you don’t want in the first period. Again, that’s what happens when you’re not sharp. The other team had a 2-0 lead and we had to chase the game.”

Early in the season, this team has been good coming back in games, obviously, it’s easier to play with the lead. Eventually, it catches up with you. Tonight, it came back to bite the Fighting Hawks.

Entering the series against the Fighting Hawks, Dutchmen goalie Jake Kupsky was 1-5-0, 3.18 GAA, .891 save percentage. On Friday night against the Hawks, Kupsky was a brick wick wall as he stoned the hometown team stopping 37 out of 38 shot to get his second win of the season.

UND went 0-4 on the power play putting an impressive 14 shots on net during the man advantage. But It wasn’t enough. The only stat that matter was the 4-1 Union College win.

“I will take a lot of responsibility for not getting the guys going.” Senior captain Austin Poganski said. “I don’t know what it is. That’s kind of what we’re looking for, to get going right away. Whether if it’s kind of grinding it out in the first few shifts of each game or getting a big hit, whatever it is, we’re kind of working through that process right now. It’s taking a little longer than we hoped, but I think we’ll find it in the next few games.”