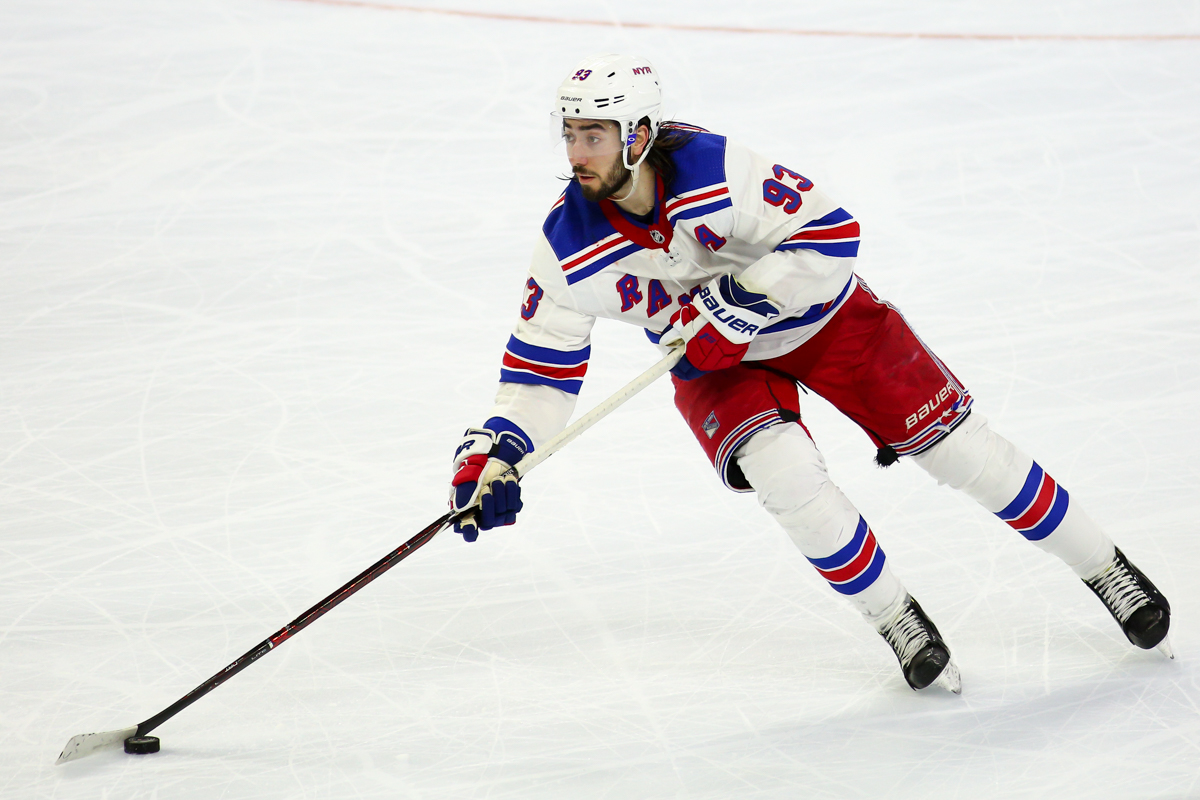 Maybe you’re bored with rundowns of the Ducks’ lineup. Well, if someone would just tell Dallas Eakins not to put his forwards in a blender every night, I’d stop writing about what he’s doing. But here we go again with the Rangers in Anaheim for a 1pm contest Saturday.

The first line had the same center, Getzlaf, and different wingers, Devin Shore on left, newly inserted into the lineup, and Kase, up from line three (which had been line two on Thursday).

The second line was Rakell with Henriqe and Silfverberg, which was as it had been until last week, when suddenly Henrique had been moved down to play with Kase and Max Comtois. Out from  playing between Rakell and Silfverberg was Sam Carrick, who was sitting.

The third line was Comtois on left, Sam Steel at center, and Troy Terry on right. In Thursday’s game versus the Kings, Steel had been on Getzlaf’s left, and Terry had been on his right.

So got it? First line new wingers, second line (which had been listed as the third) new center, third line (formerly the second) two new guys with the left winger the only stable element.

Hours after the start of the game, Dallas Eakins would say, “I thought [the third/Steel line] really had a good game, and I thought not only were they solid, but they had some real good scoring chances, and I think they enjoyed playing together; it’s a challenge. You know, you lose sleep over those, getting those lines together sometimes, but it was something that we wanted to go back to. We kinda started the year out that way, but I thought they were really good tonight.”

Thursday, Deslauriers had fought MacDermid of the Kings, Grant explaining after that it was to motivate the team. They hadn’t really needed the motivation at the time. They did on Saturday, as the Rangers came out and scored at ten seconds, Zibanejad, his tenth of the year. Uh-oh. It didn’t get better quickly, as the New Yorkers got a second one with less than four minutes gone, from Panarin. Nineteen on the season so far for him, a number so unfamiliar here on the left coast that one had to check the stats twice to see that it was correct.

Things improved, no fighting needed. The home team got a goal back before ten minutes had passed in the first period. They tied the game at even strength at 1:02 of period two. That goal saw Henrique go to the deep slot and do a fake that Lundqvist bit on, sliding to his right. Out of position, he couldn’t get back to the left. Gudbranson took a one-timer from a knee and buried it. This was his second goal of the season.

After the game, he walked through the dressing room, where the media were gathered in a huddle, with nobody being interviewed. “Hey, I score two goals a year, and you don’t want to talk to me?” he joked. We asked him to stick around, but he was already through the door to the changing area.

New York surged by a goal early in the third, and things were well in hand for them, despite the play being very even and the Ducks excelling in chances. The goal came when Zibanejad went down the right side and forced a shot from in close. It appeared that Gibson had it, but it squeaked in. This was his second of the game, 11th of the year.

Josh Manson all but tied the game when he cruised into the slot and got a puck from the low side, shot dead on, but saw Lundqvist make a brilliant glove save.

It likely would have ended like that but for Brady Skjei taking an ill-advised tripping penalty with three minutes and change left. The Ducks scored in the person of Lindholm, who after the games said, “You can see in the power play lately, moving the puck. You can see guys have more of a shooting mentality and being confident in shooting, and pucks go in. If you don’t shoot, you never know if it’s going to go in if you just pass it around.”

The goal wasn’t on the setup in the zone, but on a rush. He took a slapper from the high slot. He was going left to right across the blueline. There didn’t appear to be a screen. The puck ended up taking a bounce as it headed to the net.

He added later, “I think even tonight we did a lot of good stuff, and it came down to the last minute to tie it up, and obviously win in the shootout.”

Spoiler alert! The Ducks took it to OT, where the Rangers essentially dominated but did not score. The game went to the shootout. Four rounds.

The winning goal was scored by Silfverberg. In fact, the Ducks scored in the third round to tie it at one and force another round. That was Kase, who came in fast (all the other shooters for both teams had used the slow whirl) and snuck a backhand up high when it seemed there was no more room. The Rangers’ Kakko then came right in close on Gibson but saw him make a leg save.

Silfverberg came down the left side close to the center line and did a deke and a quick backhand himself to fool the Rangers’ netminder.He talked about it afterwards, explaining the move: “I just think of a move ahead and just try to execute it and hope it beats him. Obviously, he’s a good goalie, so I was happy to see that it went in.”

Pretty good to be two goals down with less than four minutes left and get the two points out of the game. Eakins talked about not getting discouraged early: “It’s one of those things. When you get two goals against you like that, the first one a total accident . . . then we have a miscommunication. . . and I’m looking at the clock thinking, ‘Do we waste our time out here?’ but our bench was solid. We were able to have a good chat as a team during our first time out, but like not one little bit of frustration, or panic, or anything, and I think that’s a great, great sign for our team.”

Eakins was also happy about his power play, which has been a source of problems lately but has now scored goals in three straight games. “We’re not going to have a parade yet on it. I still think we’ve got lots of work yet to do there, but kudos to those young men. They’ve really taken a real interest in it, or they’re working together for their own solutions on top of ours, and that’s important. Great to see our team get rewarded for it tonight, since we certainly needed it.”

The Rangers now head home for Nashville, Toronto, and the rematch with the Ducks (December 22nd). The Ducks have four on the road. That Rangers’ date is the last of those.

My books include Facing Wayne Gretzky and Growing Up Hockey. Christmas? They’ll win you  a point or two.