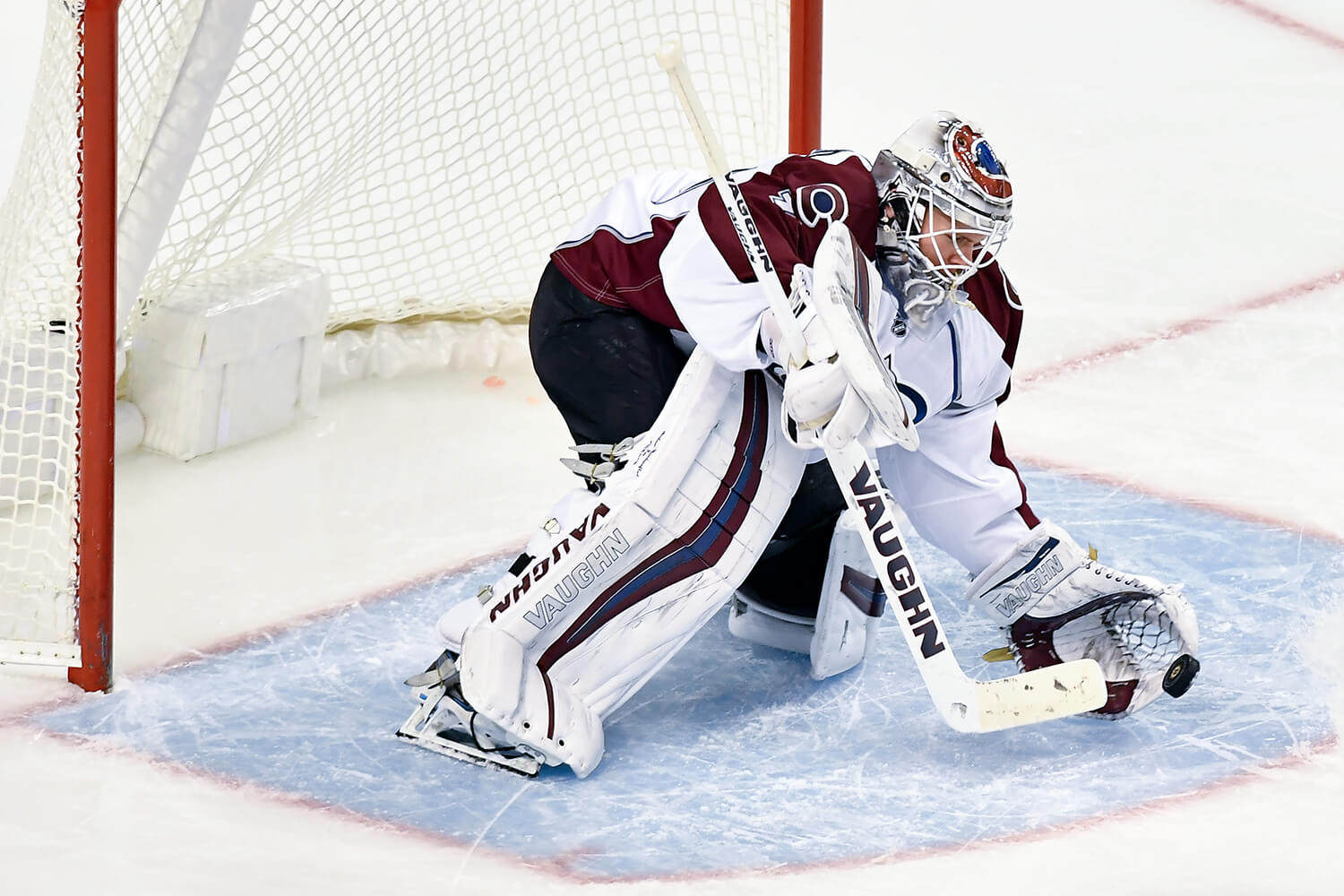 Dec 8, 2016; Colorado Avalanche goalie Calvin Pickard (31) makes a save during the second period of a NHL game against the Boston Bruins.

What are the Anaheim Ducks looking for? Consistency. They’ve obviously been drilled to think that over the past few days, because it’s the message that many of them were reciting in their press interviews early in the week.

Did they learn anything about that versus Colorado in a 5-1 win on Tuesday night? Not really. They played a so-so game, taking some needless penalties in the first, but when the Avalanche failed to capitalize on any of them, the Ducks seized the upper hand. They got a goal on a power play of their own in period one, then another early in period two.

After that, they played a somewhat mediocre second, allowing Colorado to score what would turn out to be their only goal at about five minutes, playing strong through the middle of the period, then allowing the momentum to go away from them as the period waned.

Period three, they were back hard at it, scoring three and shutting Colorado out on nine shots. By this point, it wasn’t so much about what they were doing as a team as about the relative weakness of their opponent, which was allowing the Ducks pretty much free reign.

Along the way, Jakob Silfverberg, back from a three-game absence with what was likely a concussion, scored two goals and got an assist, and Cam Fowler scored a late goal to better any prior season of his with 11. Fowler commented that he was happy to have scored it, but that he also realized that it wasn’t that important in the run of the game, making it 5-1 with just about two and a half minutes left.

In addition, Korbinian Holzer got one, his first of the year. Heck, it was his first since 2013, and he said about it after, “It’s nice. It’s an overwhelming feeling. I’m glad it got in. I reached for the puck, and I saw an opening. I thought it’s not a bad thing to shoot the puck, so I shot it and luckily it got in.”

The Ducks still got zero production from their two formerly most-productive players, Perry and Getzlaf, though the former had an assist on the second goal, by Rakell.

So look once again at those scorers: Silfverberg, Rakell, Fowler, Holzer. It seems, by that reckoning, that a tide is turning in Anaheim. Maybe it shouldn’t be such a distressing thing that the two old guard forwards are stuck on 9 (Perry) and 7 (Getzlaf) goals, if this new crew is willing to carry the load?

Anyway, everyone was in a jovial mood afterwards. Getzlaf was joking as he overheard Silfverberg talking about having his legs after the game. “Sure, you had your legs. There’s video you know,” he cracked as he headed behind a door that media doesn’t get to trespass.

Sami Vatanen joined a press scrum in front of Cam Fowler, using a water bottle as a microphone and asking a question about Fowler’s goal before disappearing behind the same magic door Getzlaf had.

As for their coach, he was happy to comment on the excellent play of Silfverberg and Nate Thompson, who was in his first game of the year after having done a three-game conditioning stint in the AHL after coming off of an Achilles injury. He played lots of minutes in all situations in San Diego on the weekend, but got under ten in fourth-line duty on Tuesday versus the Avalanche. It was tune-up time, Carlyle said, noting that having him back gives the team lots of options at center.

Does it ever. In fact, if center and defense are the two places that most squads in the NHL are always looking to bolster, then the Ducks are the rare exception. They have Getzlaf, Kesler, Vermette, and Thompson down the middle. The first two need no explanation. Vermette is about the best faceoff man you’re going to find. He’s somewhere approaching the mid-60-percent range, way ahead of any other player with any kind of significant numbers of draws taken, and against Colorado, he was at 70% (seven for 10).

Thompson provides grit, veteran presence, and help on the PK, which as it is, is in the top ten in the league.

The Ducks now hit the road for six games. One thing about the road trip is that it’s fairly long, but it is very spread out, with lots of downtime. Cam Fowler said he thought the team could use that to go out together, spend time as teammates, etc. His coach had a different idea. “I think with the time in between games, it’s going to make the road trip seem even longer. But as coaches, we look at it, there’s ice time available to practice. I don’t know if the players are going to be quite as happy about it as the coaching staff [laughs]. We haven’t had a lot of quality practice time or time available to practice over the last six weeks, and now we’re going to have to take advantage of it. We’re looking at it until there’s 11 games until the next break, and we’ve got to garner our share of points out of these 11 games, no matter where we play them.”

The Ducks then return for two at home, but of their next three after that, two are road trips to Arizona and LA. So look at it another way: If the Ducks can get through this six-game stretch which starts in Florida and ends in Minnesota, they then have eight games where the furthest they have to go is Arizona. That will take them to within shouting distance of mid-March, and leave them with sixteen games left, of which nine are on the road. The toughest stretch: four in Western Canada. Should Edmonton and Calgary, Vancouver and Winnipeg still be in the playoff hunt at that point, and a good guess is that at least three of them will be, then that will be a tough stretch.

Anyway, the Ducks have positioned themselves well, going 10-3-3 since Christmas and regaining the Pacific Division lead. Should they hold on to win that title, they’ll have done it five times in a row. Only this time, they won’t have Couch Boudreau to take them to the playoffs and lose in a game seven, as they have done the last four years running.

What Anaheim should hope is that they don’t get into too many OT games. They’re awful 3-on-3, and no amount of joking around by Ryan Getzlaf, which was what he was doing a week or so ago after a game, commenting on the 3-on-3, will solve that. It was fine—the Ducks won that night.

Carlyle summarized his feelings on the upcoming road trip: “You have to be successful on the road to garner points and move up in the standings. That’s what it is. We think we can go into any building and be competitive. That’s really our mandate.”

Perry’s assist, by the way, was his 700th NHL point, so there were mementos collected all over the ice as far as the scoresheet was concerned on this night.