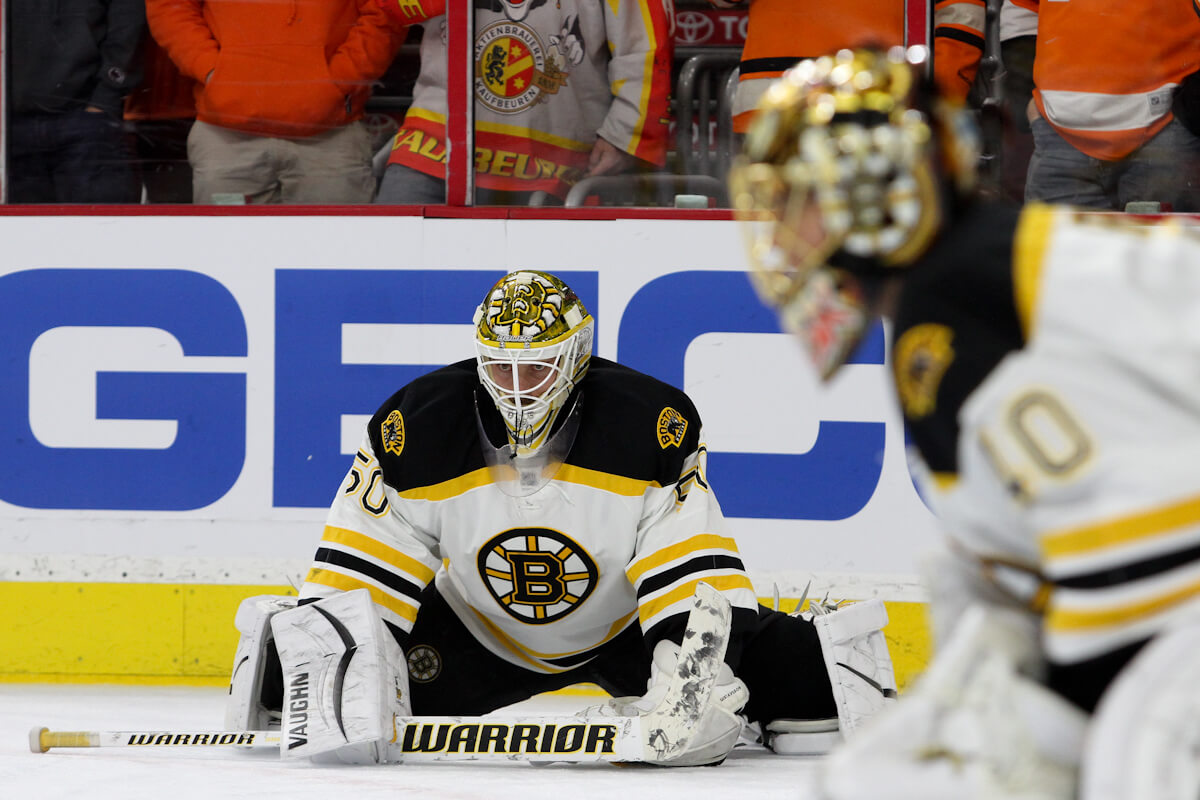 The Ducks roared out to a lead so quick that Phil Hulett didn’t get one goal call made when the crowd in Honda Center erupted in a cheer that drowned him out. It was about four minutes gone, and the Ducks were up 2-0. These teams don’t see each other often, and so you hear things more than have facts. What I’ve heard about Boston? Maybe the coach should have gone at the end of last year.

Wrong, wrong, wrong. Left Coast bias. Whatever you want to call it. The team is way better than the hearsay suggests, and way better than their first 4:07 suggests. In fact, when I looked up at the end of the period, what a surprise!—they had come on and made the shots 11-10 in their favor.

By the end of two, it was 20 for the Ducks and 27 Bruins. The score hadn’t changed, but it might have. The Ducks hit a crossbar in period one on the power play. They saw their goalie hurt by a Chara slapper early in period two, going down after taking one off the chest. He—that’s Frederik Andersen—got up quickly and shook it off. Gibson, on the bench and sick, according to media reports, looked on briefly, concernedly, as did the trainer, but things went on. Andersen later said that the shot “stung” him but that he felt better rather quickly.

He seemed better when David Pasternak dropped a puck to Loui Eriksson, who blasted one that Andersen fought off high and which then rebounded up and over the Anaheim net.

The rest of the second period had the Ducks controlling, with an effective power play just short of giving the a bigger lead. Getzlaf took a shot-pass that went wide. Fowler made a soft toss to the net. Neither produced a goal, or a measureable shot on goal.

Getzlaf would record two assists before the end of the night playing with Perry and Jamie McGinn. It is the first time in a long while he’s had Perry on his wing. When Boudreau was asked after why he did that, he said, “Sometimes, I’m sure we’ll go back to the other thing too, but both groups were getting a little bit stale. Our scoring wasn’t as proficient as it was three weeks ago, so we decided that a little change is good, and it sparked some excitement at the beginning of the game, and that got us through.”

McGinn, who scored the first goal, after the game said mostly what you’d expect, but here it is in his voice: “I was pretty excited [to be on the line]. They’ve had a great history together, and they seem to find each other very well, so I was just trying to work had, keep things together, and not change my game. I was trying to recover pucks, get some hits, get pucks into their hands.” He said that on his goal, it was “just a nice bounce, but I’ll take it.” He thought it went off his skate. “I don’t know. I’m just told to go to the net, where good things happen. Create scrums. . . . I just saw Getzy coming across and Perry opening up, so I’m just going to go the net. If it hits the goalie, I can whack away at the loose change, or maybe get a shot. I just want to get there and make traffic. The best part about tonight is that we won the hockey game.”

Boston’s best chance in period two, and perhaps the game, arrived on a broken play. Tyler Randell launched a puck to the net and Eriksson got the rebound. He put it back on goal, and Andersen looked awkward—but effective—in rolling towards it to his right, kind of flipping himself over to push the puck out of the air and out of the range of the net.

Were the Bruins coming on? Maybe, but then the third period happened. And the Ducks slammed in another goal. It came from Lindholm when just 58 seconds had rolled off the clock. Not a great goal, either, it came off a rebound deep in the slot and went under the netminder’s leg as he went down. At this point, Boston was still up on the shot clock. With five minutes gone in the period, they were at 29, Anaheim 23. It was 3-0. The mostly full arena was contentedly quiet.

You’re expecting the tone to shift here, right? It’s not going to, because the Ducks continued to lead, ending the game with a 4-0 shutout.

Look at those numbers, stats-heads. The Ducks score .2 of a goal more than they allow on average. The Bruins score .29 more. So in theory, they should beat the Ducks, though the numbers are close. Boston has a very solid PK and PP, also, both in the top ten of the league. But how you gonna beat Anaheim’s PP, second best in the NHL, and PK, first overall with an ungodly 87% effectiveness? That’s right, you’re not. Boston didn’t.

They did get feisty mid-period in the third. First a bunch of Ducks crashed their net, and Stoner ended up fighting Chara. Yes, I said that. Crazy, that guy Stoner. It didn’t end up as a punch-up so much as a dust-up, with Stoner taking the big dude down while Chara got in a nasty elbow as he fell. “Increases his street cred,” was the reaction of one person sitting near me.

But they also played some good hockey, their quick-strike offense buzzing around the top of the Ducks’ zone and resulting in some dangerous shots on goal. On one, Andersen casually punched the puck out with his blocker. Cool. Not as well-dressed as Hank Lundqvist, one would guess, but as collected in the net, at least on this night, and it worked out in this, a game which he wasn’t expecting to start.

When asked about his shutout, Andersen said, “In the warm-up I didn’t feel the best in the world, but after that I got it dialed in. We ame out hot, and got ahead right away.” He later said that getting an early lead isn’t key. “It’s nice, obviously, but you still want to just focus on the next shot. Hockey’s a fast sport, obviously, so I doesn’t take much to score two goals. It can happen pretty quick, so you’ve still got to stay sharp.”

This was Andersen’s second shutout this year, fifth of the career. He got his 20th win also. He has won 15 of his last 17 games, with one OT loss thrown in. In his 39 appearances, 28 times, he has held the opponent to two goals or fewer.

The Ducks now head out on the road. Boudreau already knows they’re in tough. “It’s going to be tough. Four different time zones in ten days,” he says. “If we’d lost two in a row going in, all of a sudden, that’s a lot tougher go.”

The Ducks now play five of the seven Canadian teams starting with Winnipeg. The only places they don’t go Northwards are Calgary, which is in Anaheim the night after the trip ends, and Vancouver, who comes in right after that.

Think that over. You could say it this way: the Ducks now play seven non-playoff teams in a row. Ouch.

Thanks to Steve Carroll of the Ducks, who had me on his radio broadcast between periods one and two of this game.