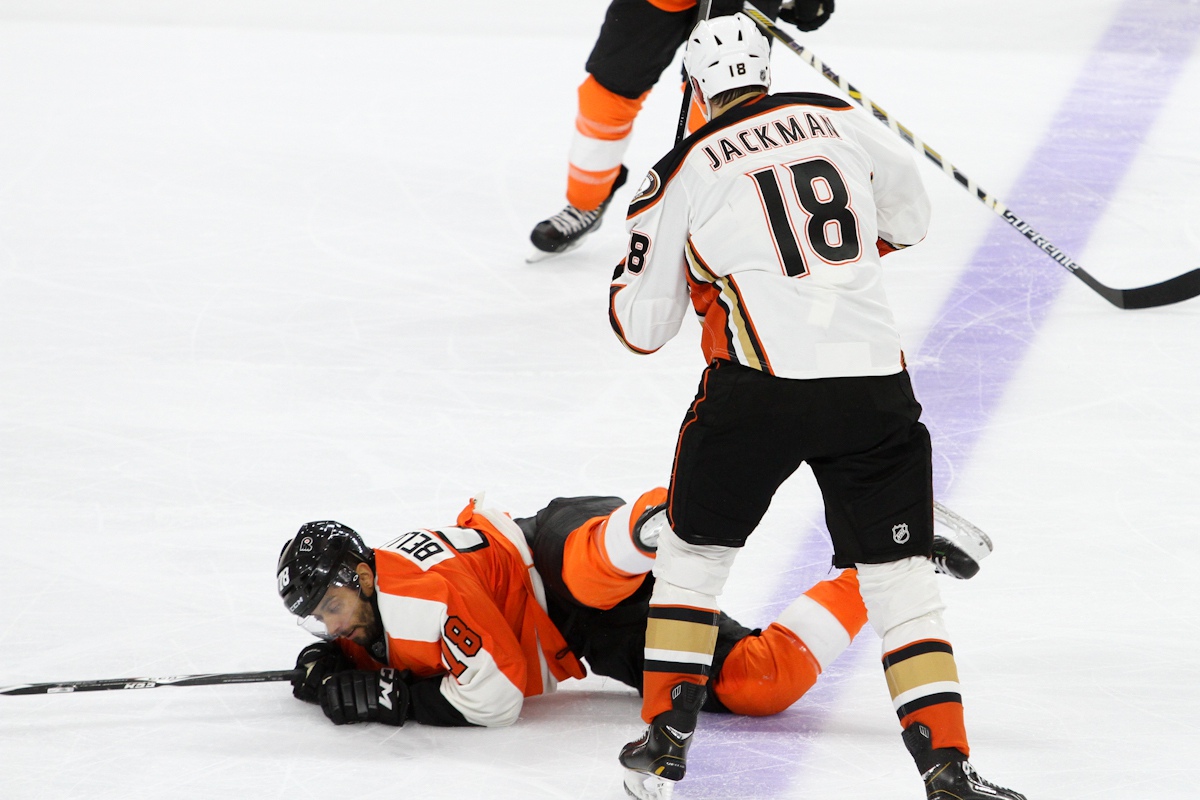 The Ducks have at least one thing to be thankful for this Black Friday. They’ve played 16 times in their team history on this day, and won nine of them. They’ve also lost four and tied three. Oh, there’s also the sunshine and the fact that it was 80 degrees outside the arena in advance of the 1pm start time for their game with Chicago. The problem was, that sunshine didn’t extend into the blessing of a Thanksgiving Friday win, as the Chicago Blackhawks dominated Anaheim in all categories including the score, which was 4-1 with the last goal into an empty net.

The problem for the Ducks, if this loss was about their weakness, was on defense. Mat Clark was playing in his fourth game of the year. Jesse Blacker, a defensive call-up from the AHL, found himself wearing 77 in his first NHL game. His path to the big-league goes like this: he was with the Windsor Spitfires and Owen Sound Attack, drafted by the Leafs, and played for the Marlies in their farm system. The Ducks picked him up in the 2013-14 season and had him in the minors with Norfolk. He scored five goals there last year in fifty games, and had played in 14 until his call-up to the big club, with no goals recorded and four assists.

Why were these kids, plus relatively inexperienced Josh Manson, in the game? Beauchemin is now declared out for four to six weeks with a broken finger. He was hit by a puck against Calgary a few nights ago. With him not in, the D corps is young, too young, and as a result, the coach had to make constant adjustments. So for example, in one sequence in period two, here’s what Boudreau did with his backline: He had Lindholm and Josh Manson. Then Clark and Blacker. Then he played Lindholm three shifts in a row, first with Vatanen, then Fowler, then Manson. Then Manson stayed on and Fowler came back out.

This didn’t work, at least when the two least-experienced players, Clark and Blacker, were on. For instance, they were victimized with the third Chicago goal, which came on a turnover to Versteeg, who made a behind the back pass out front to Kane, who banged it in. Neither Clark nor Blacker seemed to have any idea what to do on the play. Perhaps the speed of the Hawks was just too much. Certainly you can imagine that getting the call, “Hey kid, you’re playing,” and hearing, “By the way, Chicago’s in town” right after would be a gut-twisting experience.

Soon to provide relief on defense is Eric Brewer, who will arrive from Tampa Bay. The big defenseman will likely play his 1000th game in an Anaheim uniform, as he’s only 18 away from that marker. He’s big, at 6’4”, and he came relatively cheap. The Ducks gave up a 3rd–round draft choice to get him. That’s a 2015 choice. And while he’s something around a four-million dollar man, the Ducks have no trouble with the cap, and even got the Lightning to keep about a fourth of his salary. When the year ends, he’s a free agent, so call it a short-term deal with potential for a longer-term relationship. Of course, Brewer is 35, so it’s not like the Ducks will want to ink him for a super-long deal, if they have any interest in keeping him at all.
One odd thing odd about the game was the number of Blackhawks fans in attendance. Basically the whole lower bowl was filled with red shirts, and when Brad Richards put the first goal in on a short side wrist shot that just flat out beat Frederik Andersen, the arena erupted with cheers. Same thing happened on the rest of the tallies, and the “Let’s go Hawks” cheer that they got up was pretty convincing too.

Where were the Ducks fans? At the sales tables in WalMart fighting people for cheap TVs, apparently. This game has tradition, as much as any contest that’s barely two decades old can have, so it’s a shame that those tickets got sold off to the opposite team’s fans. Saturday night, that same crowd will migrate to LA so their team can take on the Kings. Will the atmosphere be as tolerant? I’m not one to stir up trouble, but here’s your answer. NO!

The Hawks now play LA Saturday night, while the Ducks head to San Jose for a date with the Sharks at the same time.

Thanks to Ducks broadcaster Steve Carroll for having me on as his between-periods guest. We talked about my new book, Facing Wayne Gretzky, and other books I’ve written.

I’ll be on Duck Calls with Josh Brewster Saturday evening after the San Jose-Anaheim contest. AM830, KTLA; available worldwide on something they call the “internet,” whatever that is J.