Bridgeport, CT — Sacred Heart did everything right on Wednesday night to open their Atlantic Hockey Quarterfinal series with the Rochester Institute of Technology. They recorded a playoff record nine goals to step one game away from their first appearance in the AHA Quarterfinals. Upon puck drop on Thursday night, the Pioneers appeared geared for another win. Tiger goalie Logan Drackett had other ideas.

SHU outshot RIT 13-9 in the opening frame. Yet the Tigers’ sophomore netminder from Calgary, Alberta, stopped every shot on net while Pioneer goalie Josh Benson faltered. RIT broke the ice 8:03 into the game with Shawn Cameron ripping one top corner on a 2-on-1 rush. Ryan Kruper followed with a slick backhander 2:49 later. Chris McKay blasted a shot from the point 16:06 in to conclude the night for Benson. The freshman from Stillwater, MN, allowed three goals on only six shots faced.

Successor Brett Magnus did not fare much better in the second. After the Pioneers dictated the pace for much of the frame, including some narrow misses and fortunate saves, Alden Dupuis scored his third goal of the playoffs off some crisp passing from Shawn Cameron and Jake Hamacher. The lead ballooned to 5-0 minutes later when  Shawn Cameron tacked on his second goal of the night on a breakaway. Shortly before, SHU was denied a goal with a goaltender interference penalty that Head Coach CJ Marottolo accepted after seeing it in the intermission.

“I think the referees made the right call. I think our guy got position in the blue paint.”

After a rare agreement on a goalie interference minor, Sacred Heart did get a goal back in the final minutes of the second. Alex Bates fired a shot on Drackett from the blue line and the puck trickled through for the extra-defenseman’s second goal of the week with 1:10 left in the second. 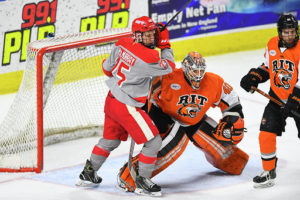 The momentum remained on the Pioneer side to open the third. Ryan Steele got a breakaway look and threaded a backhander through Drackett for his second tally of the series 2:39 into the frame. SHU dominated the shot total 13-5 for the third and 39-24 for the game. Todd Goehring cut the lead down with a shot from the left extended goal line. However, an Austin Magera kneeing minor killed the chance for Sacred Heart to climb back. Jake Hamacher scored a power play goal to make the lead 6-3 and Adam Brubacher capped the night with an empty netter from his own left faceoff circle for a 7-3 victory.

Alden Dupuis set a career-high four points with a goal and three assists.

Wayne Wilson commented on his team’s resolve and bounce back effort after the game.

“It was easy to put last night’s game in the rearview mirror because of how lopsided it was,” Wilson said. “I think if it was a tie game and they scored in the last minute, that would’ve really stung and would’ve hurt a lot more. Both teams let games get away from them. I think tomorrow’s game is going to be a lot tighter and a lot lower scoring.”

“That team is a well-coached team,” commented Marottolo. “They’re a proud team. And we knew we’d see their best. They got off to a great start which put us behind the eight-ball. I thought as the game went on, I thought we had the puck a lot. We had some chances. I thought our guys continued to fight until the very end. So I was proud of that.”

Sacred Heart and RIT share the same record after the game, 16-16-4.

The teams conclude their playoff series with a decisive Game 3 on Friday night. Puck drops at 7 pm at Webster Bank Arena in Bridgeport, CT.