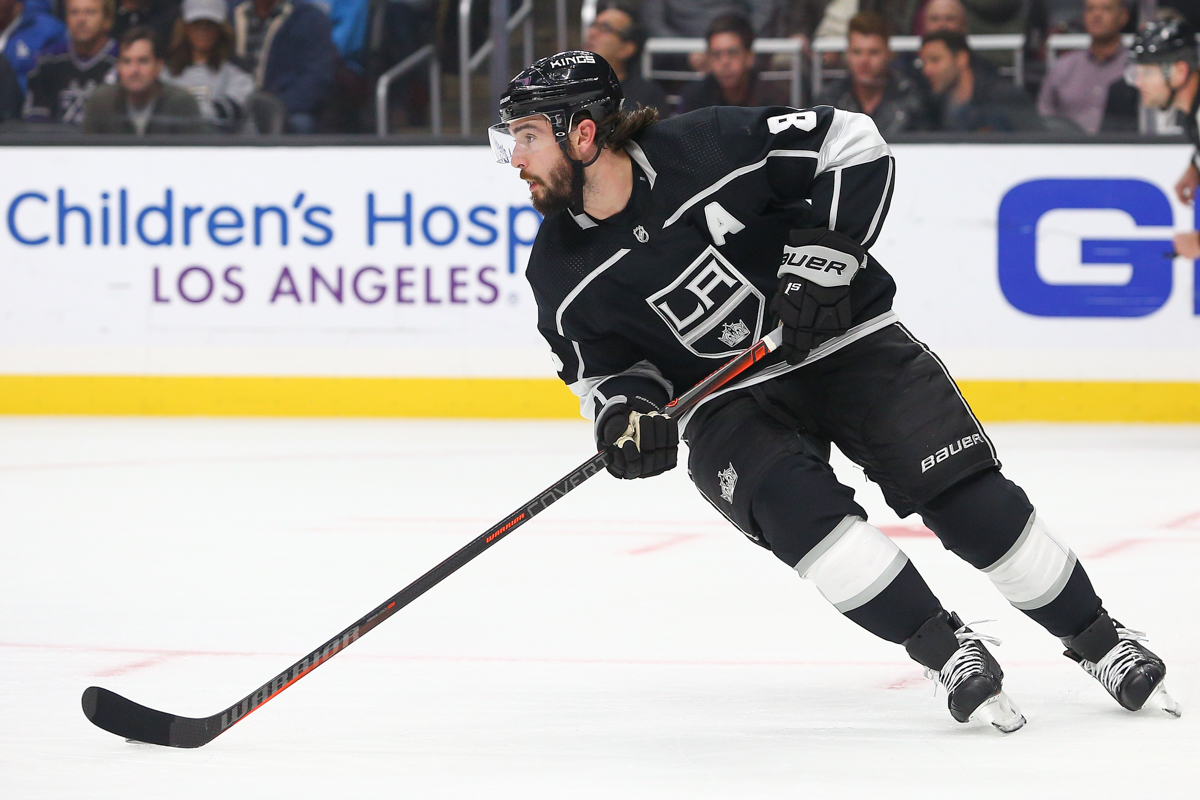 It would have been advisable for the Kings to beat that Ducks Tuesday night. After all, they had two games in hand, and they came into the game having gone 1-3-1 in their prior five games, but winning the  last of those, against Ottawa, 4-2. All of these contests, by the way, were at home.

And it was likely that they would win, being at home for the first game of the “Freeway Faceoff,” a marketing canard that is supposed to create rivalry. There’s no need for that—these fan bases are as different as sushi and burgers.

Add need to skill—Drew Doughty was back after having been gone with  an injury since October 22nd—and you’ve got a bit of a sure formula.

Then the Ducks’ Ryan Getzlaf went down in period one, and it was announced starting the second period that he wasn’t coming back. It was a lock for LA. Or was it?

All was still under control, even with the Ducks up 2-1 after two periods, all the scoring having come in the second, but then two goals in 29 seconds broke the game open and put the LA squad on the wrong end of a 4-1 score.  Less than three minutes were gone in  period three. The goals had been flukey at best, poor and stoppable at worst, at least goals two and three. And number four was  just plain bad luck.

But let’s start with goal  one, because it was Troy Terry getting back in the goals column. Danault of the Kings failed to clear a puck, and the Kings’ defense played around with it until Terry took it from them. He went across the crease with it, two guys with sticks on him, and fluttered it past Jonathan Quick. It was further evidence that the long point streak Terry ran up earlier in the season was skill, not the hockey Gods on  his side.

OK, goal two: It was a long shot from Shattenkirk off a turnover, and it floated past a group of guys, including the  goalie, over the glove hand.  Goal three, similarly soft, was on the power play. Fowler passed it around the outside but took  a shot  from the mid-slot. Quick was moving left to right, and it eluded him.

And the fluke: goal four saw Lundestrom go to the net, and Quick make a leg save. Then defenseman Roy tried to clear it and it hit off Edler’s shinpad and went in. Nobody’s fault, but it must have been discouraging for the Kings.

The shots were relatively even through the mid-point of the game, but stretched out a bit in Anaheim’s favor in the last period. They ended up  coming back almost even, 34 Kings, 36 Ducks.

But it didn’t end easily or  fast, despite Anaheim’s 4-1 early third period lead. The Kings got a second goal to make it 4-2 when Kempe potted his eighth of the year. But the final period  was nearly halfway done, and the  Kings, they don’t score much, right?

Then the Kings did it again, or appeared to, though the Ducks were waving their sticks like it was scored with a high stick. In fact, there were multiple deflections on the way to the net. First tip was on a high stick, but the puck then bounced down and was touched by Gibson, then knocked behind him by another of his players, and finally Shattenkirk knocked it in off the back foot of the  goalie.

After a long review, it was called no goal.

Being that the game was in LA, there was a considerable expression of discontentment after the goal was waved off. The trouble was, nobody knew quite why it was so ruled—the ref’s microphone was not functional on the “no goal” call.

The steam went out of the Kings at this point. They had appeared to score two quick goals, and to trail by only one. With the two-goal deficit restored, they slowed down—but only for a moment. There was a good chance when  Moore put a puck ack to the D and Kaliyev couldn’t get a stick on the puck on the rebound that came off Gibson, and that close call was a symbol of what could still be. The Kings rallied, with Iafallo and Dustin Brown scoring two goals as quick as the  two the Ducks had  scored earlier in the period—about 30  seconds apart. It was thus  4-4 and went to OT.

The score remained the same and the  Kings  took the first goal of the shootout. Was a full rebound from the dead possible on this night? The Ducks scored in their second shootout attempt. The third round, Gibson made a save on Kopitar, and Shattenkirk of the Ducks scored on Quick. The Ducks came away with two points, the Kings with one. This matters a good deal now, because the teams have played a significant number of non-conference games already, and thus will play direct rivals more in the coming days.

After the game, Doughty commented on coming back. “[When you’re hurt,] you’re basically not doing anything with the team. I missed the Canadian road trip, one that I love to go on, not playing with the guys and stuff like that.  It feels so good to be back, and hopefully that never happens again, because I did not have fun.” He added that the Ducks “Have  got some good young players. They have a solid D corps, actually, and that moves them along, and good goaltending. . . . That was a good team, but I thought we played with them all night.”

He said the third-period comeback gave him goosebump feelings, and  that that’s something that you feel most intensely when you’re in the game, as opposed to watching it. “I just missed everything about it. I can’t pinpoint one thing, just missed being with the guys.”

Coach McLellan affirmed that the team was glad to have Doughty  back, and that they felt full  confidence in him. Sounds like it when you look at his ice time:  27:55. That led all skaters on both teams.

The Kings now go to Calgary for a Thursday game. The Ducks trundled home to face Vegas Wednesday night.

Brendan Lemieux missed the game serving the first of his five-game suspension for biting Brady Tkachuk of Ottawa on the weekend.

Brian Kennedy is a member of the Professional Hockey Writers Association