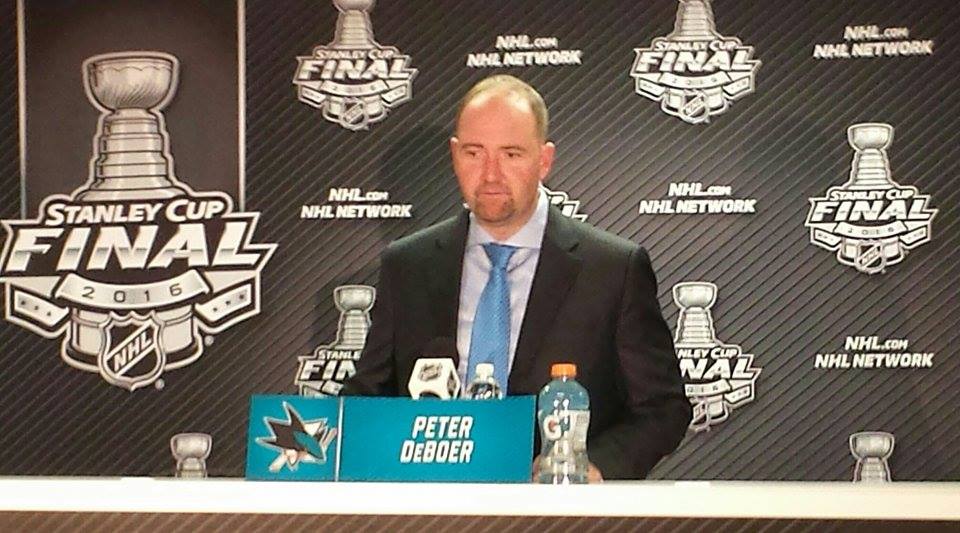 Joonas Donskoi scored the game-winning goal at 12:18 of overtime to give the San Jose Sharks a 3-2 win over the Pittsburgh Penguins in Game 3 on Saturday night at SAP Center.

The Sharks were down 2-0 to the Penguins, but were relentless in Game 3 of the Stanley Cup Final. Their comeback consisted of dedication, determination and effort.

The Sharks announced a sellout crowd of 17,562. The majority of fans were ready to turn up in teal. Also, retired Seattle Seahawks running back and Oakland native Marshawn Lynch brought “Beast Mode” to the Shark Tank for Game 3.

“You couldn’t have scripted it any better,” center Logan Couture said. “Overtime win, loud. Fans were into it from the start.”

Sharks coach Peter DeBoer spoke with the media about the sad news, confirming Tomas Hertl was day-to-day with a lower-body injury.

Dainius Zubrus replaced Hertl in the lineup and skated on the fourth line.

The game started with an early penalty given to Joel Ward, who was called for high sticking Conor Sheary 2:58 into the first period. The Penguins went on their first power play of the game.

Ben Lovejoy winded up for a slap shot from the right point to open the scoring for the Penguins. Pittsburgh took a 1-0 lead at 5:29, courtesy of Lovejoy’s unassisted goal, his second of the playoffs.

The Sharks didn’t sink into despair. Instead, Justin Braun let loose a wrist shot from the point that beat Matt Murray, tying the contest 1-1 at 9:34 with his second goal of the playoffs.

The score was deadlocked 1-1 after 20 minutes, however, the Penguins outshot the Sharks 14-6.

The Sharks went on their first power play of the game after Carl Hagelin went to the penalty box for tripping Melker Karlsson at 10:39 of the second period.

Patric Hornqvist deflected Lovejoy’s shot past Martin Jones for a tip-in goal, his eighth of the playoffs, putting the Penguins ahead 2-1 at 19:07.

Even though the Sharks caught up on shots, they continued to trail 20-15. The Penguins had better scoring chances and led 2-1 after 40 minutes.

Nick Bonino received a double-minor for high sticking Joe Thornton at 4:48 of the third period. The Sharks went on their second power play of the game. This time, San Jose capitalized on the man advantage, as Joel Ward scored the game-tying goal at 8:48. Ward cranked a slap shot from the high slot past Murray for his seventh goal of the playoffs.

The Sharks played some good defense, which prevented the Penguins from scoring. Jones blocked two wrist shots from Hagelin and Kris Letang late in the third.

Ward’s goal forced overtime as Game 3 remained in a 2-2 deadlock after 60 minutes.

Joonas Donskoi carried the puck to the left circle and fired a wrist shot past Murray at 12:18 for the game-winning goal. Donskoi’s sixth goal of the playoffs lifted the Sharks over the Penguins 3-2 in Game 3.

Martin Jones made 40 saves for San Jose, while Matt Murray made 23 saves for Pittsburgh.

With the win, the Sharks cut the Penguins’ series lead to 2-1.

“Obviously a must-win game for us,” said goalie Martin Jones.

DeBoer shared his thoughts to the media during his press conference.

“It was big to get a win without him. We needed to win this game tonight. Our group all year has been full of rough patches. But we had a positive attitude,” DeBoer responded when asked about the Sharks’ win without Hertl. “We wouldn’t have made the playoffs if we didn’t have that attitude.”