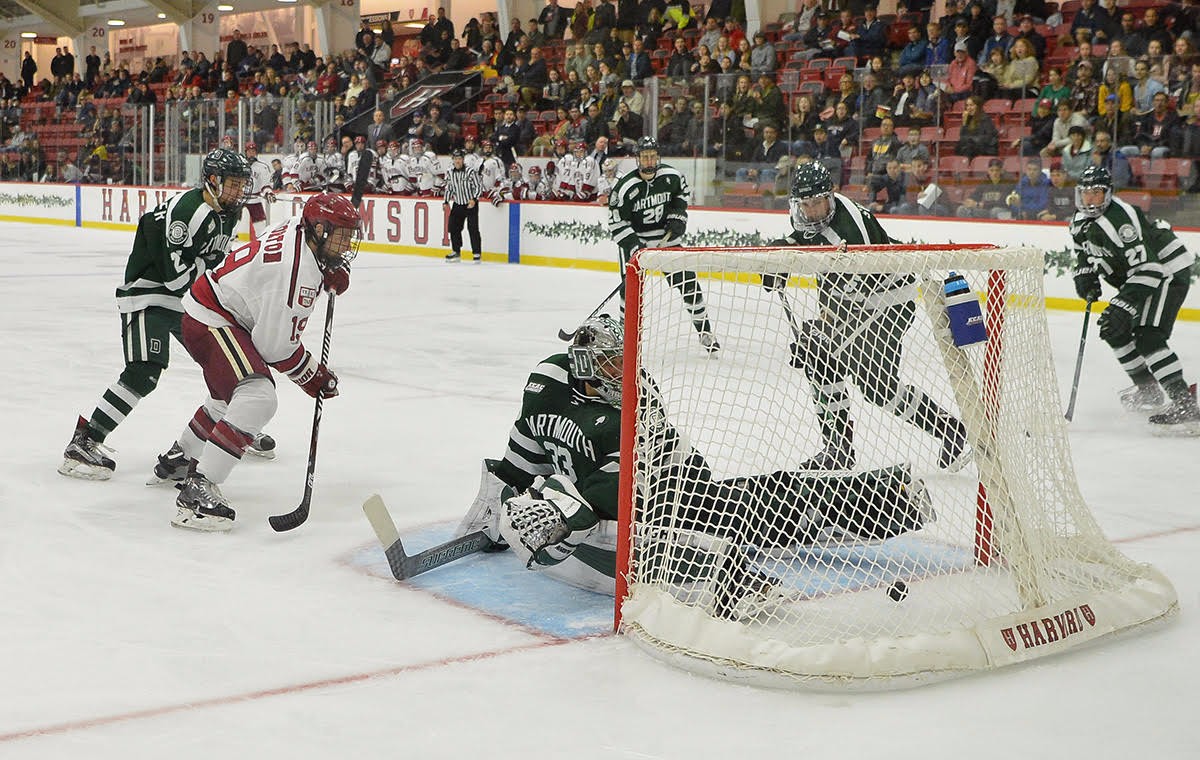 Allston, MA- Dartmouth College’s and Harvard University’s hockey teams have been roller coaster rides this year. Neither started the season well. Dartmouth was 2-7-1 before traveling to Denver for a series split with the defending National Champion Pioneers. Since then, the Big Green have been a dark horse competitor in the ECAC. Harvard, meanwhile, entered the year with expectations of another Frozen Four run. They started cold, losing four straight in November to national contenders Colgate, Cornell, and Minnesota. The rest of 2017 was a .500 performance. Since 2018, the Crimson have ridden the stellar play of Ryan Donato and a talented freshman class to a top-four ECAC ranking and a first-round bye in the playoffs.

This weekend saw the two programs stage a fierce series at the Bright-Landry Hockey Center. Dartmouth won the first game 4-1 while Harvard won the second game 7-1. The teams met on Sunday night for the series finale. They competed hard and showed their team’s strength. Ultimately, the experience and skill of the Crimson, particularly Ryan Donato, led the way for a Crimson win.

It did not appear that would be the case early. Dartmouth came out firing, dominating the shots 7-1 in the first seven minutes of the game. Harvard goalie Merrick Madsen did his best against the pressure but yielded a goal when Collin Rutherford controlled a rebound off Madsen’s pads and gave the Big Green a 1-0 lead. Harvard began to turn the tide after the eight-minute mark, pressuring Devin Buffalo with flurries and quick shots. The Crimson got some help when Connor Yau committed a high sticking minor.

On the ensuing power play, Adam Fox found Ryan Donato for a wicked shot from the slot to beat Buffalo and tie the game 1-1. Dartmouth did outshoot Harvard 11-10 for the period, but the Crimson had the momentum at the break.

Harvard completely controlled the second period, outshooting Dartmouth 12-2. Even with the ice tilting, Buffalo held firm, trying desperately to extend his season and Dartmouth career. Near the halfway point of the frame, Harvard beat him. Michael Floodstrand drove to the net and fired on Buffalo. The puck sat against his pads and Ryan Donato cleaned it up for his second goal of the game. Harvard led 2-1 at the second intermission.

The Big Green shifted momentum back their way in the third, outshooting Harvard 9-7. But for the first two-thirds of the period, Harvard continued their offensive surge. Just before the ten-minute mark, Adam Fox took a pass from Benjamin Solin and fired a shot through Buffalo for a 3-1 Crimson lead. Four minutes later, Harvard cleared a Dartmouth offensive chance and Ryan Donato got a chance to show his skills. The junior from Scituate split two defenders and got to the crease. He took the puck to his backhand, but couldn’t get a shot off. So he kept the puck and brought it back to his forehand for a shot, a hat trick, and a 4-1 Harvard lead. Dartmouth mounted a late assault, pulling the goalie and landing a goal by Kevan Killistoff off a Quin Foreman pass. But the Big Green ran out of steam and Harvard secured a 4-1 victory.

Big Green Coach Bob Gaudet was disappointed with the outcome but proud of his team’s development.

“My guys gave it everything they had. We’ve got a great group of kids. I really like our team coming back next year.” This team was The loss ends Dartmouth’s season with a 16-17-2 record. The Big Green landed an impressive upset of the reigning National Champion Denver Pioneers, a tie against Minnesota-Duluth, and strong conference wins against Clarkson and Colgate. Only three Big Green players will leave Hanover after the season. Goaltender Devin Buffalo and Alternate Captains Tim Shoup and Corey Kalk will graduate in May. Everyone else is returning and a strong freshman class will join them. Dartmouth should be a darkhorse contender in the ECAC next season.

The win improves Harvard’s record to 15-13-4 and secures the Crimson’s fourth consecutive trip to the ECAC’s Final Four in Lake Placid, NY. Coach Ted Donato was happy with the team’s performance and positive about Harvard’s chances in Lake Placid.

“Dartmouth played super competitive. When you’re in the playoffs, you have to elevate your game. And they made us elevate our game. The three-game series they had vs St. Lawrence got them in a mode of do or die playoff hockey. Our guys weren’t ready for that on Friday night. But the response was good. It’s tough to get back to Lake Placid. But I think we’re ready.”

Harvard will face Clarkson in the ECAC Semi-Final game at the Herb Brooks Arena in Lake Placid, NY on Friday night. Puck drops at 7:35. The winner will play the winner of the Cornell vs Princeton game.