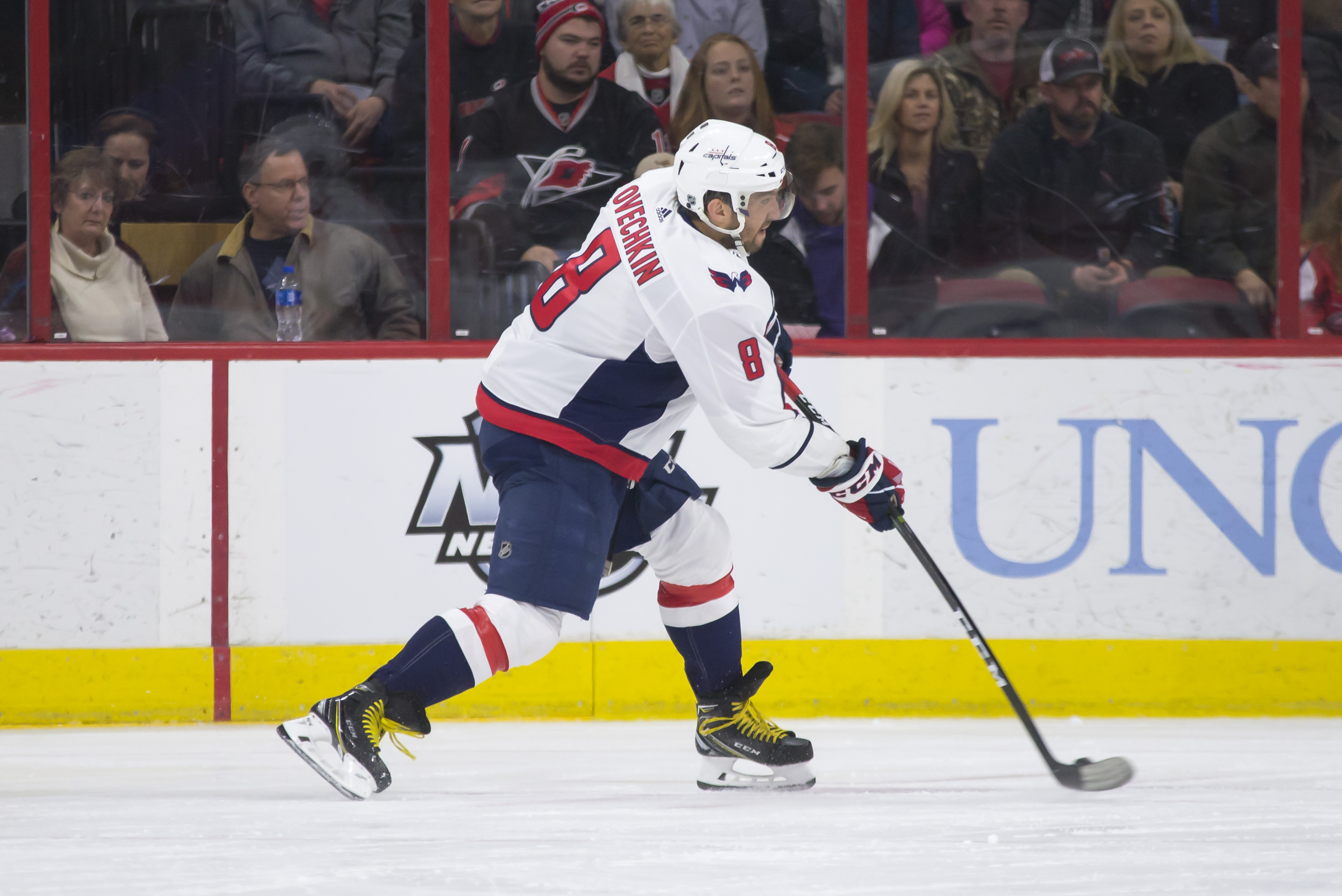 ALEX OVECHKIN (8) puts a shot on goal during a game against the Carolina Hurricanes. The Capitals beat the Hurricanes 5-4 in overtime.

Do My Simple Job

Everyone in the southern part of the state knew he was going to do it. Sunday night, and then again Monday. Who? What? Ovechkin, whose one-timer from the left dot on the power play simply can’t be stopped.

Sunday in Anaheim, he blasted one that literally went through Ryan Miller. Miller later recovered to notch the win that makes him the most victorious netminder in US-born history. But the shot—it was so hard that he couldn’t close his arm on it. It dropped and trickled over the line. That’s all it has to do.

And it was an important one, the 40thof the year for Ovi, which made him a member of a select group of players with ten forty-goal seasons. The others are Gretzky, with 12, and Dionne and Lemieux with ten such campaigns.

Should he reach 50 goals (and he’s closer than ever now; see below), he will be one of three to record at least eight fifty-goal seasons. The others are Gretzky and Mike Bossy, who did it nine times.

On Monday, he was at it again, in the first period in LA. The Kings had taken a “good” penalty, sort of—a haul-down of a guy rushing the net. Ovechkin had two wristers on the power play. Neither did anything. Then they got him a puck to one-time. It actually came off a game of catch with John Carlson from the blueline. On the second time it came his way, the Great Eight blasted it. Jack Soupy Campbell had no chance. 1-0.

They made it 2-0 twenty seconds later at regular strength. It wasn’t Campbell’s poor play that did it. The puck was deflected in front.

The Kings, actually, had started out playing pretty well. They were outshooting the Capitals in the early going, 5-4. But their first period power play opportunity was wasted at around the eight-minute mark, and this because of the same old thing: no movement, especially coming to the blueline. It was so still at one point, Doughty was the only one moving. Not gonna work. And it didn’t.

The shots were a respectable 10-7 for the Kings in period one.

The night prior, the Caps had suffered a 5-2 loss to Anaheim. And the Ducks deserved the win. They had come from back by a goal (the aforementioned one-timer), tied it at one, gone down 2-1, tied it at two, and then steamrolled three goals in the third period, starting at just 37 seconds, on the power play.

The Capitals thus came out a-blasting on Monday night. And even up 2-0, they did it again. Guess who? Ovechkin. Another one-timer blast. Again totally overwhelmed the poor netminder. So two power play goals on two chances. (They would have one more later, and not convert.)

But here’s a thought: if you know this is what Ovechkin’s going to do, why do you leave him alone to do it? Nobody was within fifteen feet of him. Why not? I mean that honestly—WHY NOT?

Guess what, guys? When Washington puts the puck to the right side of the zone on the power play—THEY DON’T MEAN IT. They’re only doing it to open up #8 on the left side.

Now I know I’m not just talking to the Kings here. Everyone in the entire league needs this lesson. But it was just so glaringly obvious on Monday night.

Brett Connolly addressed the matter after the game: “[John] Carlson does a great job of not letting anyone know where he’s going to give it to him. He’s not really looking at him half the time anyways, so it’s, O[vechkin] just needs a little bit of room, so if there’s some traffic in front and the goalie’s looking around, it’s tough for goalies to get back, and especially when he puts it where he wants it. It’s amazing what he’s doing every night and every season. He’s got a hell of a shot, and he scored a couple of big goals for us tonight.”

Ovechkin’s second proved to be the winner by the time it was all done.

Carlson commented further, “Every team plays differently, and there’s certain ways that if he can get the puck against teams that stand a little bit close to him, like tonight, and I know as a D, the hardest part about playing on the PK is   . . . you’re constantly reacting. If you can make plays quick enough and execute them on the tape, the puck can move a heck of a lot faster than a player.”

He finished: “It’s a chess game on finding what’s open, but we want to get him the puck, and everyone knows that.”

The Kings continued to outshoot the Capitals, leading in that department 13-10 well into the second period, but nothing dangerous was directed at Pheonix Copley. At the end of P2, it was 17-14 for the Kings. But nothing was really close to going in.

For instance, early in the period, Fantenberg took a slapper. Saved. The Hagelin took a shot with Kempe in front of the net. The latter tried to snag the rebound, but he missed it. Late in the period, Fantenberg went to the net with a shot again. Saved off the leg pad. Then Doughty got the puck, and he put it to the front of the net with a crowd in front. Good idea, but nobody  could get turned around to snap at the rebound. And that’s just how it seems to be with this team—a step behind, or too close to the net, or too far, or the puck skips over the stick, or facing backwards when forwards would be better. It’s always something.

The third period started out a dud. The Kings didn’t get an offense going. Washington didn’t have to. One example of LA’s lack of execution: Kopitar, taking the puck down the ice and through the middle, by himself, with no support. All Washington had to do was stand up at its blueline, and they had him.

Then there was, briefly, hope. The Kings rushed down in the form of Dustin Brown on the left wall. He shoveled the puck to the slot, on a quick backhand, for Iafallo, who was cruising in just behind the defensive reach of Nicklas Backstrom. He got the stick down and shoved the puck into the open side of the net.

A scramble in front of the net put things at four-on-four with about six minutes to go. Ovechkin took himself off with a further penalty for tripping with 5:17 left, making it four-on-three for the following 17 seconds. LA was ahead in shots by 26-20.

The Kings did the same poor job penetrating the zone as they had earlier on in the game. Washington just stood up at the blueline and swatted the puck back down the ice when LA tried to bring it in. The game petered out at that point, with just over three minutes to go. The crowd stuck around, largely. Perhaps some of them were partisans of Washington, as had been the case the night before in Anaheim.

With 1:40 left and the puck in the neutral zone, Campbell headed to the bench. The Kings took their timeout when the Caps iced the puck at 1:00. They scored on a one-timer from the point by Kovalchuk with 27.7 seconds left. For a moment, again, it seemed like something special might happen.

Another icing with 4 seconds gave Carter a chance to win a faceoff at the right dot. Doughty and Kopitar were right, Kovalchuk left. Doughty got the puck and flung a wrister high and wide.

What all of this suggests is just how miraculous the Ducks’ win over Washington was on Sunday night. No second day of a back-to-back. No second-tier goalie. Just the real deal Capitals, and the Anaheim team stomped all over them. Curious how this game is. And a lesson—you have to go, because you never know what could happen on a given night.

By the way, someone also asked Ovechkin what he does when he faces a new goalie. No special preparation. “I think he have to figure out what he have to do. I just do my  simple job, you know?”

Simple for you maybe. Miraculous to watch.

The Kings now go on the road for four dates, coming back to LA for the last day of February, when Dallas is in town.

The Capitals continue their road trip in Toronto and then Buffalo.